Studies in the inane: 12 notes comparing a purple bottle cap with Green Lantern 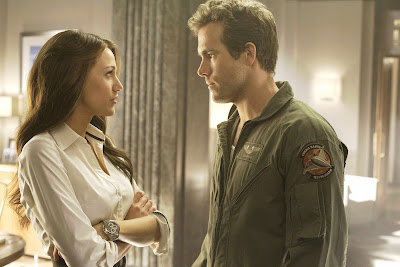 1) Green Lantern has all of the writerly interest of running one's hand through wet shallow mud in a ditch. It's like trying to get worked up about dryer lint. I did not hate Green Lantern as much as its trailer led me to think I would. In its blandness that kept reminding me of an advertisement for the Cub Scouts or a particularly toothless Superman remake, the movie doesn't merit hatred. It merits indifference that leaves me wondering about the the fundamental emptiness of the local Cineplex, the pointlessness of summer tent pole productions full of multicolored men flying around, signifying nothing. Warner Brothers studio wants another successful superhero franchise, especially now that the Harry Potter business is thankfully almost over. Green Lantern is the indifferent mechanical result of that studio's goal.
2) In the midst of placing a 2 quart bottle that once held some Welch's 100% grape juice outside in our back porch recycling bin, I paused to examine its purple top.

It is circular with about a half inch radius, and it is about one third of an inch thick. The top is made of plastic, and it has many small lines etched into it in order to facilitate opening and closing.
3) As a young man struggling to get a foothold in this job market, do you wish you could fly? Do you wish that you could get Blake Lively (who plays fighter pilot Carol Ferris) to look upon you with slack-jawed wonder after you save her from an out-of-control helicopter at night during a party? Then, you can fly away in your skin-tight green suit and mask mysteriously, leaving everyone wondering, who was that hero? Warner Brothers would like to indulge in your fantasies for you. Would you like to fly to yet another comic book planet where a special corp of intergalactic peacekeeping policemen celebrate the emerald energy of will power by pointing their rings towards the heavens, sending great green strands of CGI light upward to the point where it looks like a great big piece of green yarn sprouting from the side of the planet Oa? 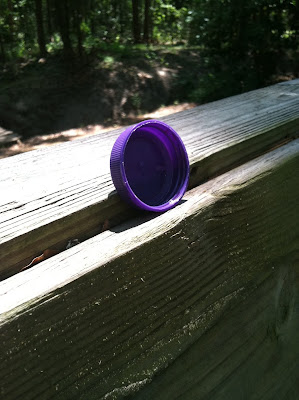 4) On top of the bottle cap, in small black letters, if you look closely, it reads NE11E19 17:42 P BEST BY MAY 18 12. A small two centimeter nipple-like concavity sits in the middle of the top, and the number 17 and the word MAY cross over it. Underneath, a drop of grape juice still adheres to the plastic surface (I can tell because I just smeared it with my right thumb). Several concentric circles of plastic round the edges of the inside of the bottle top. Also, you can read the number 19 neatly centered toward the top of the inside circle. The color purple is consistent throughout.
5) Would you like to fight the great enemy Parallax, who thrives on the energy of fear, hellbent on destroying the earth with his dreadlocks? The curiously Rastafarian anthropomorphic villain Parallax likes to open his mouth and cause the glowing skeletons of his enemies to leave their bodies and fly into his ominous maw. He sets up Green Lantern's basic dichotomy between fear and will, which reminded me a lot of the scene in Richard Kelly's immortal Donnie Darko (2001) where Donnie mocks his gym teacher Kitty Farmer (Beth Grant) for obliging his class to look at everything in terms of love and fear. As he says, "Life isn't that simple. I mean who cares if Ling Ling returns the wallet and keeps the money? It has nothing to do with either fear or love."
Kitty Farmer replies, "Fear and love are the deepest of human emotions."
To which, Donnie says quite sensibly: "Okay. But you're not listening to me. There are other things that need to be taken into account here. Like the whole spectrum of human emotion. You can't just lump everything into these two categories and then just deny everything else!" 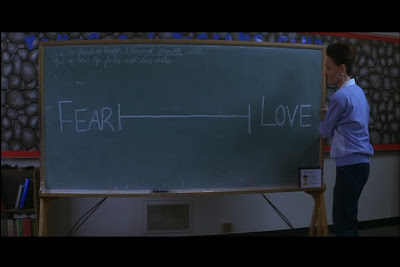 Soon after, Donnie gets into trouble for recommending that Kitty Farmer insert the Life Line exercise card into her rear, but in Green Lantern, whole galaxies remain concerned with whether or not the Green Lantern can conquer his fear to the very end.
6) In comparison to Green Lantern, the purple bottle cap has relatively low production values. It does not (as far as I know) have a major advertising campaign promoting its summer release at the local Harris Teeter grocery store (although I imagine that one could find an ad for Welch's 100% Grape Juice on television, but without much emphasis on the bottle top). The cap has no computer-generated special effects, movie stars that appear on the cover of major magazines like Entertainment Weekly, action figure merchandising, or major tie-ins with fast food franchises. It is just a bottle cap sitting here on one arm of a red lounge chair in the Film Doctor's living room. The bottle cap weighs hardly anything. I can easily fit it in my pocket.
7) How nice that some alien thought to give the unconscious Hal Jordan (Ryan Reynolds) some white briefs to wear in the midst of an intergalactic tune-up after he is chosen by a magic ring to become a super hero. Good thing that the inhabitants of planet Oa are sensitive to the concerns of the MPAA's PG-13 rating.
8) I imagine that the bottle cap would earn a G rating, as it does not include any sexual or violent content. 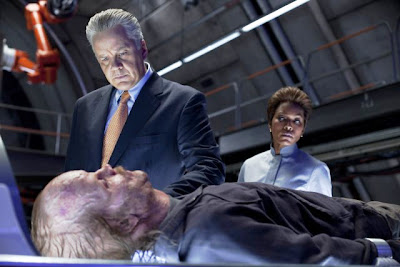 9) I do not pretend to understand why Peter Sarsgaard's character Hector Hammond turns into the elephant man. Hector is filled with resentment over his father's (played by Tim Robbins) condescension, resentful that maverick fighter pilot Hal Jordan is handsomer than he is. So, in the midst of investigating a dead alien, Hector contracts some weird virus that causes him to gain telekinetic and mind-reading powers as his head swells and his hair recedes. He attains a kind of nerd apotheosis.
10) The bottle cap has no villains after it that I know of. I will deposit it in the large recycling bin on the side of town near I-95. Since I live in the south, I've never been all that certain that anything I drop off there will be properly recycled. Perhaps the cap will just end up in a landfill and last hundreds of years.
11) When it comes time for Hal Jordan to pledge his troth to the green lantern, he learns that this is the proper oath:
In brightest day, in blackest night,
no evil shall escape my sight!
Let those who worship evil's might,
beware my power… Green Lantern's light! 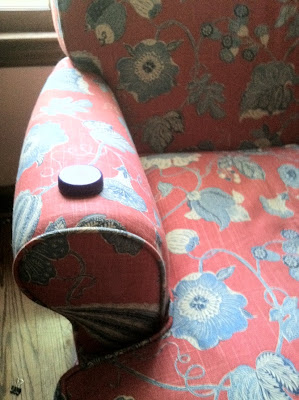 12) The bottle cap has no oath, no magical powers, and no green (or purple) lights that emanate from it. If I hold the bottle cap over my head, I am unlikely to fly into space as Hal does with his ring. Having served its purpose over the past week, the bottle cap remains very quiet and still. It is not concerned with fear or will or father issues or adolescent angst or marketing or anything else. If you sniff it carefully, the cap smells very slightly of grape juice.
Labels: bottle cap Green Lantern inane

Anonymous said…
Clever but a bit depressing to think that you paid good money to see the film. At least grape juice is good for your health.
June 19, 2011 at 3:54 PM

The Film Doctor said…
Thanks, Anon.,

I was hoping that the bottle top would prove more compelling than the movie. I could start up an entire "inane" series, with more comparisons later as I turn to Transformers 3, etc. The Twilight Saga: Breaking Dawn should prove most difficult, because what inane object could possibly prove comparable? A single grain of sand? Antimatter? Perhaps an old cheese fry found in a sofa.
June 20, 2011 at 7:06 AM