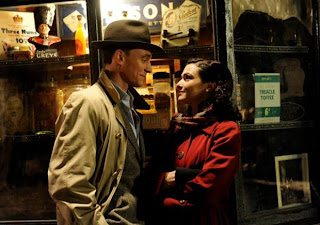 "Beware of passion, Hester.  It always leads to something ugly."

"What would you replace it with?"

In this exchange between Hester Collyer (Rachel Weisz) and her husband's mother (Barbara Jefford) we get the romantic tension of Terence Davies' The Deep Blue Sea, set in 1950s-era London. With her name evoking the heroine of The Scarlet Letter, Hester falls epically in love with the vivacious Freddie Page (Tom Hiddleston, otherwise known as Loki in The Avengers). After Hester scandalously dumps her fuddyduddy older husband Sir William Collyer (Simon Russell Beale) and moves in with Freddie, she finds that the callow and frequently drunk World War II vet cannot reciprocate her love (though he does like her), so she creates scenes, attempts suicide, in effect, doing all that she can to drive Freddie away from her as fast as she can.

Given that the script (adapted from a 1952 play by Terrence Rattigan) largely takes Hester's point of view, The Deep Blue Sea begins in a lush, swooning manner, with Barber's "Concerto for Violin and Orchestra" playing loudly on the soundtrack and overhead tracking shots of bodies intertwined in passion.  Hester experiences multiple flashbacks (and flashbacks within flashbacks) of earlier happier times in her love affair as she pulls a Sylvia Plath ten years early by attempting to gas herself in the bedroom of a dingy, bourgeois English flat. Suffocated by so much pretentious cinematic technique, the viewer could understandably run for the hills. As I watched the movie on Blu-ray, my significant other said "I get the idea. Can we turn this off now?" Fortunately, the film soon recuperates with a more jaundiced perspective and much irony as Hester receives several big comeuppances. First, she survives the suicide attempt and tries to cover it up, calling it an "idiotic accident" to the landlady who helped save her life, but when Freddie discovers her suicide note in her robe pocket, he, exasperated, runs off to get drunk in a local pub. We learn that, in dramatic contrast to their earlier flirtations, Hester has recently debased herself multiple times to Freddie, pleading with him, promising that she "won't speak" if he'll just return to the flat. Freddie responds with a mixture of contempt and aversion, saying "I can't be bloody Romeo all of the time!" 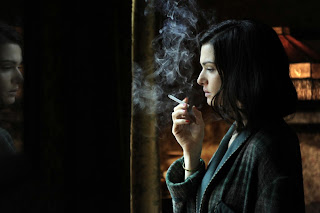 Ultimately, the success of The Deep Blue Sea hinges on how much the audience can understand and sympathize with Hester's love. From Freddie's point of view, and from the perspective of our more jaded era, Hester's devotion can just seem ludicrous. Modern-day adulteresses would have careers to fall back on if their cougar flings didn't work out. The Deep Blue Sea made me wonder how much of Hester's suicide attempt might have been calculated?  She doesn't take all that many pills, and they were only aspirin; the room might have been too large and well-ventilated for the gas to work. But these kinds of practical details can be easily missed given Florian Hoffmeister's gorgeous cinematography. Was Hester trying to force Freddie to acknowledge her despair? to punish him for not loving her enough?

How much contemporary validity does Rattigan's play still have? It reminds me a little of an episode in Upstairs Downstairs where a maid falls in love with a chauffeur, gets dumped, and then hangs herself. The Bellamy family carries on, the chauffeur proves indifferent, and the suicide becomes a banal Romeo and Juliet mini-drama of unrequited love, worthy of one show. How much importance can one attribute to one woman's willingness to sacrifice everything in a society that doesn't understand it, especially the man she's sacrificing it for? As her husband William puts it, "How could you throw away so much for so little?" William's mother predicted that passion would lead to something "ugly," and by the end, she is proven right. How much would a real woman of Rachel Weisz's intelligence and considerable star presence allow herself to suffer so much for being true to herself? No outside circumstances can ever match the extremity of her devotion, but that may be the point of the movie--to find a aesthetic means to justify her sacrifice.
Labels: The Deep Blue Sea

ruth said…
Great review! I love the conversation you put at the beginning. 'Beware of passion' sums up the sentiment of the story very well. This reminds me a bit of The English Patient and having one of my fave 'newish' British imports Hiddleston is a why I really want to see this.
July 29, 2012 at 2:01 PM

The Film Doctor said…
Thanks, Ruth. Hiddleston moves from charming to increasingly rude very convincingly. As Loki in The Avengers, Hiddleston demands that people kneel before him. He appears to go for roles where others worship him.
July 30, 2012 at 4:52 AM