Against irony: the Film Doctor's one sentence review of D.T. Max's Every Love Story Is a Ghost Story: A Life of David Foster Wallace 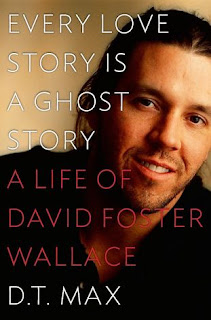 Much like Brian Kellow's Pauline Kael: A Life in the Dark, D. T. Max's Every Love Story Is a Ghost Story: A Life of David Foster Wallace is so much better than it has to be, in this case for its portrait of a young scraggly-haired, bandana-wearing, tennis-playing Midwestern television viewer/writer (influenced by Thomas Pynchon, Don DeLillo, Ludwig Wittgenstein, and Godel, Escher, Bach), who found that "our obsession with being entertained has deadened our affect," so he determined that instead of merely joining the "three dreary camps" of recent fiction (Bret Easten Ellis-esque "Neiman-Marcus Nihilism," "Catatonic Realism," or "Workshop Hermeticism"), he strove to write what some called maximalist post-postmodernist prose that blended Lester Bangs' hipster informality with "recondite polysyllabic nouns," so, as an "apostle of sincerity," he battled Mark Leyner-esque irony, eschewed "self-consciousness and hip fatigue," and wrote a modest 1079 page dystopian novel entitled Infinite Jest (concerning a fatally addictive video cartridge, a tennis academy, a Quebecois separatist movement, and a recovery ward for addicts--all plot lines converging like parallel lines into a projected ending to be imagined by the reader) to make himself (i.e. Wallace) worthy of the love of poet Mary Karr (who happened to be married) since he believed literature should break through people's "excluded engagement of the self" in these dark times, taking comfort in Dostoevsky's model to search for ways to "live meaningfully in the present," but then, awkwardly, he got famous, consorted with Prozac Nation Elizabeth Wurtzel (who was put off by his chewing tobacco), sought the advice and competition of Jonathan Franzen, experimented with bondage (with a jump rope), appeared on Charlie Rose's talk show, hated publishing parties, adopted dogs, searched for a way to "halt the onrush of data," wrote about the subtle despair of taking an ocean cruise, the pain of lobsters getting boiled, and the weirdness of visiting the Illinois State Fair (with Wallace's family "quietly" agreeing "that his nonfiction was fanciful and his fiction was what you had to look out for") before turning to boredom as a means to finding grace through the IRS in his unfinished "Long Thing" The Pale King; for a Kenyon College graduation address, Wallace recommended that you be "aware enough to choose what you pay attention to and to choose how you construct meaning from experience," and if you don't, you "will be totally hosed," and even though his life sometimes followed the Sylvia Plath/Robert Lowell path of extreme brilliance, depression, and suicidal tendencies (repeat with visits to Yaddo), Wallace discovered that, when writing, he felt so blessed that "I can't feel my ass in a chair"--reason enough to enjoy D. T. Max's concise and exacting Every Love Story is a Ghost Story.
Labels: D. T. Max David Foster Wallace Every Love Story Is a Ghost Story