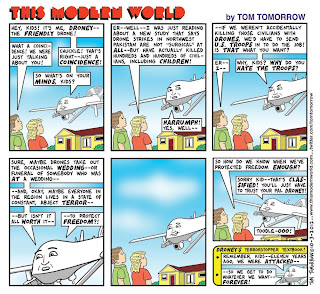 1) "imagine a world, which we will soon be living in, where everybody has drones."

2) “I wouldn’t mind if federal officials blew up other citizens and claimed it was in the name of my safety. But it’s just that when it comes to me, I guess I’d rather not be slaughtered by my own elected officials on charges that never have to be validated by any accountable authority. This is tough.”

3) "Trial by jury, trial by fire, rock, paper scissors, who cares? Due process just means that there is a process that you do. The current process is apparently, first the president meets with his advisers and decides who he can kill. Then he kills them."

4) "'A lawful killing in self-defense is not an assassination,' the white paper reads. 'In the Department’s view, a lethal operation conducted against a U.S. citizen whose conduct poses an imminent threat of violent attack against the United States would be a legitimate act of national self-defense that would not violate the assassination ban. Similarly,  the use of lethal force, consistent with the laws of war, against an individual who is a legitimate military target would be lawful and would not violate the assassination ban.'"

5) "While we do not yet claim to punish criminals before they commit crimes, the core concept of Minority Report, that predicted future criminal conduct is sufficient grounds for locking a person up [or incinerating them], may be closer to realization in the real world than some might suppose."  --from Paul R. Joseph's "Minority Report: Is The Future Now?" (2002)

7) "Perhaps most alarmingly, no one pressed Brennan on why the administration had the right to launch drone strikes in countries like Pakistan, Yemen, and Somalia where the United States is not formally at war."

8) "Her grandmother was picking vegetables. . . . The US says this isn't an indiscriminate video game."

9) "The moral ambiguity of covert drone strikes will clarify itself very quickly if another country claims the right under international law to strike its enemies in the U.S. There may come a day when the U.S. bitterly regrets the precedents it has set."
Labels: drones due process