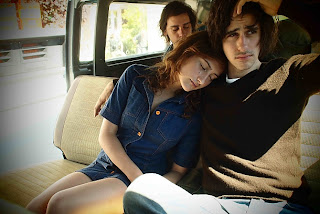 ---The Film Before the Film

---"The Many Faces of Barbara Stanwyck" by @annehelen

---"There’s also sorrow in the juxtaposition of a slow push into Gordon-Levitt’s face, half-hidden behind hands clasped together in a classic thinker’s pose, with inserts of the girl’s lifeless body at the edge of the water. It was during this back-and-forth, as the camera measures Gordon-Levitt by way of his non-reaction to shoes, hair, and odd-shaped bracelets, that I mentally wrote the note “Dear Dear Wendy: Sorry.” Until then, though, I couldn’t necessarily articulate what made this sequence of shots seem so powerful. Watching it again, I belatedly realized something: Gordon-Levitt’s eyeline never changes. We see him ostensibly looking at different details each time, but that’s never cued by eye movement. And then I realized something else, which I can’t believe I never noticed before: Those inserts aren’t from the angle at which he’s viewing them. From where he is, her feet should be at the top of the frame; instead, they’re at the bottom, shot from her other side. The other two shots are likewise reversed. You could call that an error, I suppose, but coupled with the fixed eyeline, what it suggests (and I think this is what I always responded to, unconsciously) is that Gordon-Levitt can’t process what he’s seeing. It’s so unthinkable to him that he can only take in tiny portions at a time. He’s abstracted the sight of her into objects. The images are technically “wrong,” but that contributes to the scene’s overwhelming sense of wrongness." --Mike D'Angelo

---the longer shots of Children of Men

---the problem with Phoenix

---"How many of the men and women who attend meetings about the kill lists have participated in Situation Room viewing of post-strike footage of the predator and drone raids? A retired senior intelligence officer said that some of those who have attended have wryly characterized it as watching 'snuff movies.'”

---In the Mood for Doyle

---the end credit sequence of The Dirties

---The World According to Koreeda Hirokazu

---trailers for We Steal Secrets, The Battery, Something in the Air, The Colony, Tomorrow You're Gone, and Kick-Ass 2 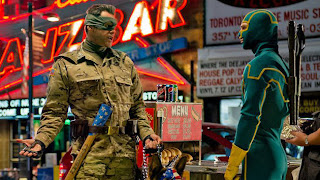 ---"Programmers expect themselves to generate the same quality code at 2 a.m. as they did at 2 p.m. earlier—and are willing to medicate themselves in order to do so. Human investors compete with algorithms trading at ultrafast speeds and responding to our orders before they are even executed. Our digital competitors are quite literally trading in our future.

In each of these cases, the bloggers, designers, lovers, programmers, and investors all sacrifice their connection to real-world rhythms in order to match those dictated by their technologies. Reporters miss out on the actual news cycle and its ebb and flow of activity. Programmers work less efficiently by refusing to recognize naturally peak productive hours. Designers miss out on quite powerfully determinative cultural trends by focusing on the mediated responses of insomniac television viewers. Businesses ignore the natural ebb and flow of market cycles, and poison their own consumers by attempting to stimulate them all season, every season.

Imagine, instead of trying to ride roughshod over these cycles, actually using or even exploiting recent discoveries about our common neurochemical responses to the four-week lunar cycle. Each week, a different neurotransmitter seems to dominate. One week, acetylcholine emphasizes new social contacts. In the next, serotonin enhances productivity. In the third, increased dopamine emphasizes risk-taking and recreation. In the last, norepinephrine heightens our analytic skills. Instead of forcing or drugging ourselves to fight these patterns, we can engage them to enhance our results."  --Douglas Rushkoff
Labels: Notable film and media links