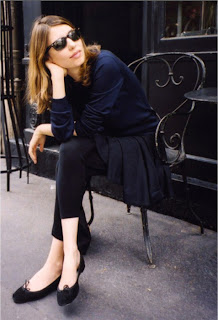 ---"When I read the Vanity Fair article about these kids, it summed up everything that I think is declining in our culture. And it just doesn’t feel like anyone is talking about it. Kids are inundated with reality TV and tabloid culture so much that this just seems normal.  I go to a concert, everyone is filming and photographing themselves and then posting the pictures right away. It is almost as if your experiences don’t count unless you have an audience watching them."

---"In the last 14 years, Sofia Coppola has become one of America's most singular filmmakers by perfecting the cinematic art of haunting, emotional passivity."

---A Cannes interview with Sofia Coppola

---"Coppola mines visual means to express the psychological states of enclosure and exposure. What you remember about her films are the microclimates of feeling and longing. As she puts it, 'My movies are not about being, but becoming.'"

--behind the scenes of The Virgin Suicides and Lost in Translation

---"If Coppola's films' do have something in common with Antonioni's, it's in the depiction of the brittleness of adult emotional life in a time and milieu in which, as the director put it over 50 years ago, 'Eros is sick.'"  --Glenn Kenny

---a discussion with the Film Society at Lincoln Center

---"if the five teens that make up Coppola’s Bling Ring, among them casual, amoral ringleader Rebecca (Katie Chang) and vapid, social-climbing Nicki (Emma Watson)—are meant to be treated as real people as opposed to walking emblems of celebrity-culture-gone-wrong, how should we relate to them? With pity? Amusement? Indignation? At times, Coppola seems to be shooting fish in a barrel: one hilarious, brutally on-the-nose shot shows one gang member’s family preparing breakfast smoothies in a spotless, gleaming kitchen, with a pair of snow-white corgis under one chair and a maid at work in the corner, as the LAPD’s incoming sirens get louder and louder. More often, she lets her antiheroes invite their own ridicule (Nikki’s terrifying monologue on bad karma, in which she announces that 'I want to lead the country some day, for all I know')."  --Max Nelson

---anatomy of a scene from Somewhere

---"For me, Marie Antoinette remained, above all, the symbol of a completely declining life style. I did not realize at which point these people, who had to control a country, were in fact only young teenagers." 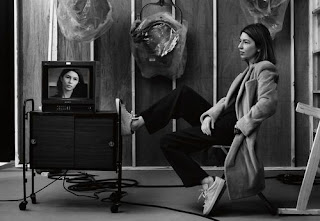 ---"Don't let Sofia's littleness and quietness confuse you," Bill Murray told me recently. "Sofia is made of steel. She's tough, but she doesn't pretend to be a man. She has a way of getting her way. She's very polite about it. She nods her head and says, 'You're right, you're right, but this is what I want to do.' And it works. When you see her movies, you forget that she is Francis's daughter. She has been able to reinvent what her last name represents.''
Labels: Sofia Coppola The Bling Ring