"The lifestyle that everybody kinda wants": 5 notes on Sofia Coppola's The Bling Ring 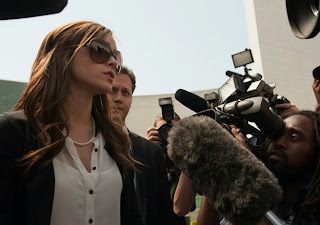 "I think we just wanted to be part of the lifestyle, the lifestyle that everybody kinda wants." --Marc (Israel Broussard)

1) I enjoyed Sofia Coppola's The Bling Ring for its humor, its almost motherly portrait of youth culture gone astray, its Bret Easton Ellis-esque vision of a supremely superficial Los Angeles, its fetishistic tracking shots of designer pumps and jewelry, and its allusions to Bonnie and Clyde (1967) and Notorious (1946), but one can also see the risks that Coppola took in adapting a Vanity Fair article by Nancy Jo Sales entitled "The Suspects Wore Louboutins" for the screen. In contrast to the more intimate, autobiographical Lost in Translation (2003), The Bling Ring views like a sociological indictment of vacant consumerist celebrity worship, a fundamentally religious world where one can commune with the objects (designer clothes and accessories, the real stars of the film) of one's deities (Megan Fox, Orlando Bloom) by stealing the signs of their glamour for oneself, but there are problems. For one thing, by relying on mostly unknowns to comprise the ring, Coppola's film lacks the charisma of, say, Warren Beatty, even though Emma Watson does what she can to lend her air of ritualized-degradation-of-corporate-franchise-built-Hermione-innocence to the gang (her portrait of valley girl self-deluded cluelessness is hilarious). Brilliantly built, The Bling Ring retains some of the shallowness of its source materials, but the superficiality of characters who lack a clear sense of self may be part of its point.

2) "America has this sick fascination with the Bonnie and Clyde kind of thing." --Marc

The Bling Ring shares with the 1967 Bonnie and Clyde an early scene where the two leads walk along a street, but whereas Arthur Penn uses the moment to introduce a waitress to a young man fresh out of jail for armed robbery against the backdrop of Depression-era small town Texas dreariness, Coppola has Marc and ringleader Rebecca (Katie Chang) "checking cars" (stealing wallets, purses, bags of cocaine) in a rich neighborhood of LA. Later, after robbing a gorgeously stylish home, Rebecca opts to leave in a different car, this time a Porsche convertible taken from the house's owners. Clyde switches cars in a similar fashion in the 1967 film, surprising Bonnie in the same way. Both movies dwell on how popular culture feeds the delusions of its characters. Just as Bonnie gazes adoringly at the "We're In the Money" song and dance routine of Gold Diggers of 1933 (ironically, just after Clyde shot and killed his first victim), so does Coppola include clips from TMZ of Lindsay Lohan (the titular deity of The Bling Ring) walking stylishly (with proper blond hair extensions) into court. Even though the Ring visits Paris Hilton's home six times, she stills lacks something in comparison to Lindsay. Lohan shares with the Ring a criminal record, the accusation of jewelry theft, and she embodies a twist on celebrity where one's transgressions enhance fame, just as Bonnie and Clyde could deliberately feed their infamy by submitting gangster photos and Bonnie's poetry to the newspapers. As Nancy Jo Sales writes, "I think they [the Bling Ring] were obsessed with clothes as a means toward crafting a new identity for themselves—a fantasy identity. Putting on someone else’s clothes is like putting on a mask. If I’m going to a nightclub that Lindsay Lohan might even be in, and I’m wearing her shoes, and I’m wearing her jacket, then how am I any different from her?, I guess the thinking goes."

3) Predictably, the Bling Ringers develop problems once they've been thieving awhile, since their selfie/Facebook-posting culture demands that they feel validated only when they can show off their new acquisitions to others. As Coppola said, "It is almost as if your experiences don’t count unless you have an audience watching them." Such conspicuous consumption that includes bragging of your exploits to friends makes it comically easy for the police to catch up with them (The Bling Ring is the only film I've seen that actually places the LAPD in a sympathetic light). 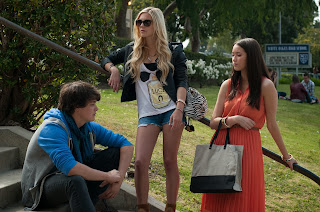 4) So what are the values of this youth culture? You are your image. Privacy no longer exists. Every event is a fashion shoot/music video/press conference/surveillance feed. Your home is a shrine to yourself (see Paris Hilton). When possible, wear designer shades on the beach, stare up at the blue sky and palm trees while driving a Porsche, and share a jail cell with Lindsay Lohan. Beyond these levels of fame are even greater ones, yours for the asking thanks to The Secret. As the real-life ringleader Alexis Neiers said, “God didn’t give me these talents and looks to just sit around being a model or being famous. I want to lead a huge charity organization. I want to lead a country, for all I know.”

5) My problem with the movie is that it ends too soon. Bonnie and Clyde (spoiler alert) die in a hail of machine gun bullets. The Bling Ring receive their jail sentences, but their real punishment will likely happen when the media stories dwindle and they return to that distinctive circle of hell--the post-reality-TV star obscurity of the merely ordinary. What will they do for attention then? As Garrison Keillor once sang, "You better be famous. You better be famous every minute. And that People Magazine, you better be in it."
Labels: Sofia Coppola The Bling Ring