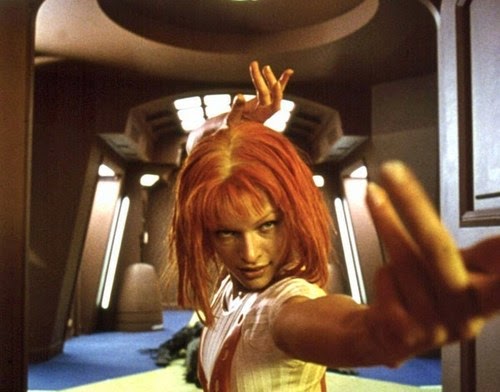 [As I brood upon the philosophical conumdrums of Lucy (Is time the only unit of measure?), it occurs to me that I did review Besson's The Fifth Element back in my very early years of writing for a local newspaper (my first was for The English Patient). Leeloo does share with Lucy a tendency to absorb insane amounts of information off of a computer without half trying.]

To review movies nowadays, one must become a connoisseur of explosions. Ninety-nine percent of the films have them, beautiful sets are built to be blown up, and one gets used to great flaring balls of light cascading across one's retina. The color scheme of The Fifth Element seems to have been worked out with explosions in mind--bright orange and blue.

I dreaded this film because a friend of mine, Rob, took gleeful pleasure in relating how some Washington DC critic ripped it to tiny shards. I had already been wowed by the preview and did not want this movie to fail. Well, it turns out that The Fifth Element isn't bad at all; it's just more interested in visual ideas than in story originality. In terms of plot construction, it resembles many other sci-fi storylines out of Heavy Metal magazine--a Blade Runneresque hero Korben Dallas (played by Bruce Willis) stumbles into a mammoth intergalactic convergence of evil forces that threatens to end all life in the universe about 300 years from now. Dallas must save the gorgeous Leeloo (Milla Jovovich) in her skimpy day-glow orange clothes, when she is wearing clothes, and her brightly dyed orange Raggedy Ann hair and piercing blue eyes, from these evil forces so she stop a large glowing reddish-black planet from creating yet another explosion when colliding with the earth.

Now this may sound silly, and to some extent the movie is silly, but it's also visually quite striking, since the director Luc Besson (of La Femme Nikita (1990) and Leon: The Professional (1994)) combines his talents with several major graphics artists and a top fashion designer (Jean-Paul Gaultier) to build quite an intriguing future world, much as the makers of Blade Runner did. In this vision of New York City, hovercraft vehicles fly around on multiple levels, Dallas' bedroom resembles a cockpit where the refrigerator lowers to expose a shower, and everyone had yellow spots on the wall to put their hands on in case the police show up.

Luc Besson has already established that he has a flamboyant punk sensibility when it comes to design; he builds great elaborate worlds to mock them and then blow them up, but he also brings a bizarre French side to his pyrotechnics that you won't see in other dumb American movies. For instance, Besson combines a beautiful opera aria song by a blue alien in what looks like the Philharmonic with an armed takeover of bulldog alien goons of a giant luxury cruise ship, and with Milla Jovovich displaying her Fifth Element calisthenic fighting power. After awhile, the aria segues into a rock and roll beat and pretty soon the entire ship explodes.

Also, Chris Tucker plays a wacked out blend of Dennis Rodman and Prince as a hyper-celebrity radio personality named Ruby Rhod who trails Dallas through his adventures. Tucker's role is high, high camp coming out of nowhere, the ultimate futuristic extension of the talk-show celebrity worship of today.

As we walked out of the theatre, my friend Jack said the film has no ideas, and in terms of original plot or characterization, he's right. Bruce Willis just walked over from Die Hard. Milla Jovovich borrows many character elements from the woman-alien in Species.  But I don't care. Visually, The Fifth Element is a knock-out.
Labels: Luc Besson The Fifth Element

Smirkdirk said…
Odd, this one. Haven't watched it in years but I always felt that Lucas much have watched it a lot. The Star Wars prequels feel like they lifted a lot of their imagery from this movie.
July 27, 2014 at 1:47 PM