"Soda is the cigarette of the 21st century": 7 notes on the pleasures of Fed Up 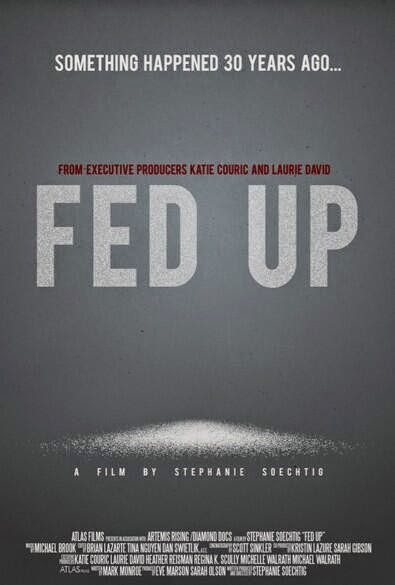 1) My wife and I disagree on a key point when it comes to the new documentary Fed Up (now available on DVD and Blu-ray). She claims that the tendency to make cigarettes and sugary processed food and drinks equivalent is too simple. One can eat sugar in small amounts; in fact, our bodies are designed to take in and process sugars. Smoking cigarettes and taking into the body their poisonous by-products of tar and nicotine is something the body was not designed to do.  Thus, to equate the two too closely creates a false dichotomy. Several years ago, I wrote a positive review of Allan M. Brandt's The Cigarette Century: The Rise, Fall, and Deadly Persistence of the Product That Defined America (2007), so perhaps my perspective of the evils of the food industry has been influenced by that book, but still . . . I think that the correlation is accurate when one considers the amount of sugar we're talking about in today's fast food eating culture. There are too many corporations with enormous lobbying power pretending that they don't already know that excessive sugar consumption is making many people overweight. Instead, we are supposed to believe that all calories are equal. If lazy people would just get out there and exercise some more and eat more low-fat processed food, then the problem with the obesity epidemic will magically disappear. But, as Fed Up shows us, all calories are not created equally, and specifically soda cans should (and probably will) carry warning labels (just as in the case of cigarette packaging) that warn of the eventual risk of diabetes and obesity.

2) As Fed Up points out, we now know that cigarette smoking is a disgusting addiction, but to talk of sugar as habit-forming is a trickier thing to bring up. What a killjoy idea--demonizing chocolate and ice cream? Ever since I significantly cut down on my sugar consumption two Augusts ago, I have fantasized of driving to the local Krispy Kreme and purchasing a 12 pack of their fresh hot glazed donuts and a jug of chocolate milk and indulging in an unheard of blissful feast. My lizard brain still thrills to the thought, but, two Augusts ago, I pretty quickly lost 15 lbs, and I like being thinner, even if, as my wife points out, I can be insufferably holier than thou on the subject of sugar (and my diet is still highly flawed as it contains too much red meat). Now, with the help of Katie Couric, a new documentary completely confirms my biases on the matter, so I highly recommend it as a kind of counter programming public service message for the next time you visit the grocery store. Some of the basic points of the movie are as follows:

5) "The behaviors that we associate with obesity--the eating too much, exercising too little, the gluttony and sloth--they are the result of the biochemistry, not the cause."

6) "To eat healthy, you must work hard against the environment." I am still freshly astonished by the amount of marketing devoted to Coca-Cola and Sprite whenever I sit through the ads before watching a movie at the local Regal Cineplex, ditto the prominent posters for soda at convenient stores, ditto the candy aisle near the check-out counter at most stores (including office supply stores). Once one gets sensitized to the evils of sugar, so many prominent retail spaces around town resemble a scene in John Carpenter's 1988 movie They Live. Processed food marketing is cheerfully omnipresent. 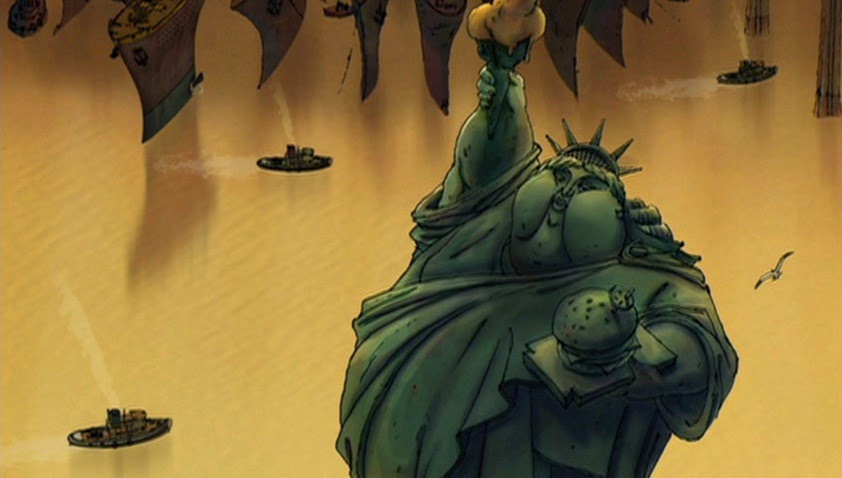 7) Even though Fed Up can be a bit heavy-handed (as I admit this blog post may be) as it cuts from one overweight child's story after another, the rest of the movie's skillful use of graphics allows its basic message to come across well. The film is rhetorical, but it knows that it's up against a sophisticated systematic campaign of untruth. We have grown used to a steady diet of way too much sugar, and advertising have conditioned us to eat and drink it.  How much are McDonald's and Burger King and other fast food conglomerates at fault, complicit in the pattern of lies? How much do the executives at McDonald's power-pack their menu items with sugar just as the folks at Philip Morris USA dose their cigarettes with enhanced nicotine as explored in Michael Mann's movie The Insider (1999)? Do we even understand how sugar affects our brains? How much do cynical people-- corporations, lobbyists, insurance companies (see below), etc.--profit from our miserable compulsive consumption? How soon will they be seen as the 21st century version of the big tobacco executives lying on the witness stand as they say: "I believe nicotine is not addictive"? 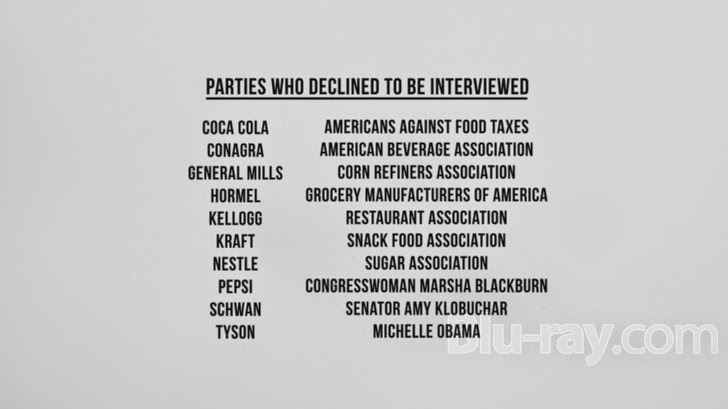