Blood Sacrifice on the Pepsi-saurus Ride: 5 Notes on Jurassic World 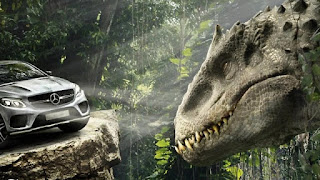 1) On May 31st, almost three weeks before the record-breaking release of Jurassic Park, I predicted the infinite forgettability of this blockbuster, mostly due to the depression I sank into every time I watched the movie's trailer. Two days ago, I actually went and saw the thing, and was happy to note that writer/director Colin Trevorrow created a much more self-aware blockbuster that partially mocks itself, thereby somehow making its mix of frequent product placement, sanitized blood sacrifice, '90s nostalgia, and amusement park ride aesthetics slightly more palatable than I expected.

2) (spoiler alert) The highly emotional little boy Gray (Ty Simpkins) is the true villain of the movie because he programs the kid viewers (and the child inside the adult audience) to get excited by the Park's spectacle. Dinosaurs will run amok soon enough, and yet here's Gray racing to the front of the train to see them under controlled conditions. Here's Gray laughing and smiling as a Mosasaur eats a captive shark, thereby scattering water all over the thrilled spectators. Basically, Gray telegraphs to everyone that the spectacle is worthwhile. He's the perfect consumer even before the product proves seriously dangerous, yet he's never really threatened because the bloodlust has been sanitized, PG-13-ized, and Spielberg-approved with some anti-corporate snark thrown in for good measure. Gray and his older brother (Nick Robinson) are going to be okay. They can scream and run from the deadly dinos, but Gray especially serves as the emotional core of the movie, the one that the infantilized audience can identify with. Adventure in Jurassic Park takes the form of Gray appearing in the same frame with the raptors and the Indominus Rex amidst all of the fetishized devouring. We never for a moment expect that the boy and his teenage brother will run into serious grief--they have their parents' eminent divorce to contend with, after all.

3) After we realize that our heroes are safe from attack, then there's just the pleasure of counting the amount of product placements that Trevorrow can cram into each shot, how many Mercedes Chris Pratt needs to stand near (as poor Robert Pattinson had to keep appearing with the immortal Volvos in the Twilight franchise), how many Cokes Pratt must drink, and how many shots of the Margaritaville bar that the poor park-goers run near in the midst of a pterodactyl attack. One pseudo-hipster named Lowery (Jake Johnson) in the park's control room makes some cracks about the corporate cooptation of every aspect of the park, mentioning "Pepsi-saurus" ironically, which was refreshing but also cynical. Corporations don't mind some light mockery of their methods just so long as the central hypocrisy remains. Colin Trevorrow has discussed how the genetically modified and particularly vicious new centerpiece Dominus Rex exemplifies corporate greed and the public's desire for ever more extreme monsters.

4) I liked the scene where Chris Pratt (as the relatively dull hero Owen) and coldly corporate tour guide Claire (Bryce Dallas Howard) do their best to comfort a dying apatosaurus who looks up at them with sorrowful eyes as they pet its head. The movie is full of these soulful moments of communion with velociraptors, a T-Rex, etc. The dinosaurs appear far more emotional than many of the humans. 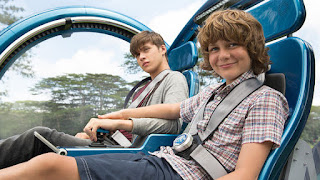 5) It makes sense that executive producer Steven Spielberg would go for the large dinosaurs in the Jurassic franchise since they combine the size of the sinister semi of his first movie Duel (1971) with the perfect killing machine with teeth, the great white shark of Jaws (1975). Jaws succeeded so well because it blends that lethal creature with tourists frolicking in the summer sun in such a way that invited the audience to think that the pleasure-seekers in some way deserved to be eaten. Consumption of humans on the screen mirrors the consumption of the viewer in the cineplex, and everyone goes home happy--shark, dinosaur, and spectator all unified in their satiation.
Labels: Chris Pratt Jurassic Park