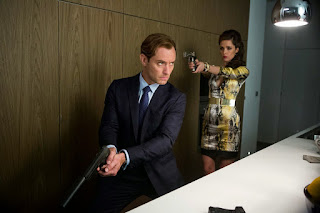 ---"Their approach is the height of simplicity: place unglamorous female characters in the storylines and genres generally dominated by men. The perspective allows Feig and McCarthy to give audiences familiar worlds while the genderbent setups offer a rich playground for challenging sexist habits in progressive ways. Bridesmaids juxtaposed classic feminine stereotypes with an audacity that ripped to the heart of traditional feminine etiquette. The Heat played with manifestations of female strength while busting open the male buddy cop world. The newly released Spy dismantles 007’s masculine domain while cutting to the very heart of society’s often reductive treatment of women."
--Monika Bartyzel

---"The relationship between any private language and a public discourse is a tricky one, and Farber’s consistent efforts to speak to his contemporaries through the chosen media have always had to contend with the skewed perspective inevitable to any parallel readings of film history and art history, with their radically different time frames and patterns of development. If Farber has generally commanded more attention as a movie critic than as a painter, this may have less to do with his grasp of the vernacular in each realm than with the deposits of time and place which locate his verbal pizzazz and iconographic slang in widely dissimilar modes of address and reception, where they register with distinctly different impacts." --Jonathan Rosenbaum

---How to Direct a Dinner Scene

--"There is a new generation coming up; they want to be famous, above all. They don’t want to make something serious or important; above all, they want to be famous. I was also, of course, attracted by being famous, but nowadays, that’s what young filmmakers want, and it doesn’t matter what they do. It’s hard to say so, but that’s my opinion." --Roy Andersson

---"Hit Me With Your Best Shot: Amadeus"

---"the Internet Research Agency had industrialized the art of trolling. Management was obsessed with statistics — page views, number of posts, a blog’s place on LiveJournal’s traffic charts — and team leaders compelled hard work through a system of bonuses and fines. 'It was a very strong corporate feeling,' Savchuk says. Her schedule gave her two 12-hour days in a row, followed by two days off. Over those two shifts she had to meet a quota of five political posts, 10 nonpolitical posts and 150 to 200 comments on other workers’ posts." --Adrian Chen

---She Stands at the End

---"[Hitchcock] thought that montage was cinema at its most pure. In theory, his method involved a subordination to the capacities of the camera upheld with such completeness and consistency at each stage of the production process, from script and storyboards through principal photography to editing, that it became a kind of mastery. Before cinema, montage meant the action of assembling mechanical components. Hitchcock defined it as the ‘juxtaposition’ of ‘pieces of film that went through a machine’ in such a way as to create ‘ideas on the screen’. His own conjuring was by sleight of machine rather than of hand. ‘Emotions of many varying sorts, shades, degrees and colours have to be manufactured,’ he said, ‘and all must be photographically clear.’ Montage used the machine against itself, creating out of its excess of indifference (the seventy set-ups for the shower scene) a spectacle guaranteed to wring the heart." --David Trotter

---"The Empathetic Camera: Frank Norris and the Invention of Film Editing" by Henry Giardina