"Be gone, or I will have you whipped": the pleasures of Whit Stillman's Love and Friendship 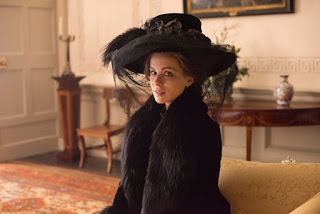 Adapted from an early story by Jane Austen, Whit Stillman's Love and Friendship is delightful, with Kate Beckinsale as Lady Susan Vernon dominating most every scene she's in, but I was confused by certain aspects of it. To whit,

a) no superheroes battle each other.

b) the movie, which is weirdly not a sequel, does not end with a large explosion and a chase scene.

c) Kate Beckinsale does not wear black leather, jump out of high buildings (landing on her feet), nor does she kill a single Lycan as she tends to do in her various Underworld movies.

Instead, Stillman relies upon Lady Susan Vernon's wit and satirical bite to drive a Regency era comedy that moves fast with lots of horse-drawn carriages rushing back and forth between estates. Stillman prefaces scenes with flagrantly artificial introductions of characters where the actors stand before the camera while we read something written on them in fancy Austen-esque font like:

Also, curiously, Stillman often leaves key characters, such as Lord Manwaring (Lochlann O'Mearain) out of the movie almost altogether, never bothering to waste a scene on a figure who serves the plot but may not be needed otherwise.

As a typical consumer of recent cinema, I am used to moviemakers spoonfeeding information to my distracted brain, but Whit Stillman makes Love and Friendship tricky, subtle, and occasionally hard to follow. I went to see it with two lady friends, and we have gotten into various arguments about it since. When I claim that I like the machinations of Lady Susan, they assure me that I should not, that she's evil and manipulative. As a man, I, too, am susceptible to her charms. Once one learns to look beyond the conventions of mostly upper class early 19th century society, one realizes that Lady Susan takes what she wants, and justifies her behavior smoothly afterwards. When she runs into a man she doesn't want to see, she says "Be gone, or I will have you whipped." Likewise, when she has an affair with Lord Manwaring and his wife Lady Lucy (Jenn Murray) understandably objects, Lady Susan points out that "If she was going to be jealous, she should not have married such a charming man."

Perhaps in part because the death of her husband has left her poor, Lady Susan comes across as more alive than her more moneyed hence complacent peers. Her former husband's brothers' wife Catherine DeCourcey Vernon (Emma Greenwell) becomes alarmed by Lady Susan's visit to her country estate due to her reputation as an effective coquette, i.e. her ability to do great mischief by getting most any man around to fall in love with her. Yet, Catherine also acts transfixed around Lady Susan, as if hypnotized by a snake. I enjoyed Kate Beckinsale's performance, in part because she proves that she does not need all of that tight-fitting black leather and slow-motion fight scenes in the gothic dark to hold one's attention. She can accomplish that well enough as a supremely self-interested player.

In an American movie, Lady Susan might've been a femme fatale along the lines of Matty Walker in Body Heat (1981) or Barbara Stanwyck's role in Double Indemnity (1944), but Lady Susan need not kill anyone either. She enjoys the chess-like strategizing of manipulating others for its own sake, much as the Marquise de Merteuil does in Dangerous Liaisons (1988). When Lady Manwaring manages to poke a hole in Lady Susan's deceptions by exposing one of her letters to Reginald DeCourcey, Lady Susan handily defuses the scandal by questioning Reginald's trust in her. If anything, she makes her ability to transfix everyone look too easy, to the detriment of Chloe Sevigny's role as Alicia Johnson, an American wife who mostly just listens to Lady Susan's confidences. In contrast to Chloe's previous work with Kate in Whitman's excellent Last Days of Disco (1988), her participation in this movie as Alicia is limited by her husband Mr. Johnson (Stephen Fry), who, as Lady Susan puts it, is "too old to be governable, too young to die." 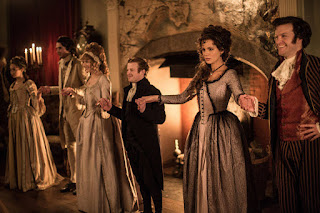 Meanwhile, as everyone reels from "the most accomplished flirt in England," Tom Bennett as the upper-class twit James Martin proves hilarious every time he attempts to talk. I liked it when he brings up the 12 commandments and then tries to explain why he goofed. When he finds some peas on his plate during dinner, he says, "How jolly, tiny green balls. What are they called?" Stillman understands how Americans enjoy watching English nobility reduced by in-breeding, perhaps, to sheer fat-headed ludicrousness. Reginald DeCourcey proclaims James Martin to be insufferably "silly," but the man still has fun in his idiocy.

In the end, Love and Friendship works just as Lady Susan does, through its "captivating deceit," its "uncanny understanding of men's nature," and its insistent charm. Sometimes, even when we know better, we prefer the company of a knowing and beautiful fraud.
Labels: Kate beckinsale Love and Friendship Whit Stillman