"No one cares about reality anymore": 9 notes on Terrence Malick's Knight of Cups 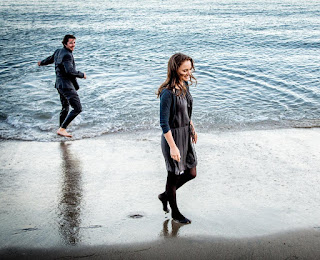 Terrence Malick won't/has contempt for/dislikes shooting a scene, and that's what I found myself brooding on while watching Knight of Cups on Blu-ray. On one level, this omission makes for a more gnomic movie in which voiceovers sound like oracles, but there are clear problems with the practice. Apparently, Malick did not write a screenplay for Knight of Cups, so much of the time, the actors did not know what would happen in the next non-scene. I took pleasure earlier in the year in piecing together links that explored the extreme filmmaking legend/emperor with no clothes dichotomy of Malick's critical reception, so I felt unusually ready to appreciate the movie, which sometimes resembles an ad for its own profundity. Some notes:

1) I did enjoy the film more than I expected to, in part because individual sections, such as a montage of Los Angeles billboards, are stunning on their own, with much credit due to Emmanuel Lubezki's cinematography.

2) So how does a Malickian non-scene work? For much of the film, Christian Bale (screenwriter Rick) strolls about LA or Las Vegas looking pained as he encounters groupies, parties, the occasional homeless person, the gorgeous interior decoration of apartments, top notch ocean-view hotel rooms, skyscrapers, etc., all seemingly designed, perhaps, as A. O. Scott pointed out, to make us jealous. Occasionally, women like Cate Blanchett (playing a former wife, Nancy) and Natalie Portman (Elizabeth) join him, but then we usually don't get to hear much of what they might be saying. Since these stars have nothing exactly to work with except for a major filmmaker egging them on, they often come across as uncertain about what to do. Perhaps Malick likes for them to be spontaneous, but it also leads to overacting. Portman no sooner arrives than her character starts to weep because she (as we learn in the voiceover) has become pregnant, and she doesn't know whether Rick or her husband is the father. I imagine that Malick ultimately cuts out the sound of much of the film's improv dialogue because it turned out to be banal and repetitive.

3) Also, whenever Malick returns to erstwhile major characters later in the movie (such as he does with Rick's dad played by Brian Dennehy), whatever significance Malick may want us to feel doesn't work at all. Here's where coherent earlier scenes would have really helped keep the film from drifting into self-important abstraction.

4) Malick loves to film the ocean crashing on the shore. After awhile, we know that the stars of the movie, as much as they avoid the waves initially, will eventually get their Giorgio Armani designer clothes wet, because what else is there to do? One can then think of how the water meets the sand, and all of its metaphorical and cosmological significance.

5) What of the tarot cards? As each section of the movie divides up under titles like "Death," "the Moon,"and "the Hanged Man," etc., I kept thinking of T. S. Eliot's The Waste Land, which is also a collection of metaphorical fragments that hints at further metaphysical depth.

6) Due to the lack of real scenes, characters end up being vaguely dramatized ideas. Antonio Banderas appears in one party scene as a fun-loving hedonist who samples women like ice cream flavors. He dances on the edge of the pool, and, of course, ends up romping around in the water fully dressed as all of the beautiful people look on. I had difficulty believing that we were ever really meant to accept Cate Blanchett or Natalie Portman as characters at all. They are, instead, stars, like Freida Pinto, happy to not have been cut from the movie altogether. In this regard, their beauty operates more like a brand--they heighten the movie with their star power regardless of whatever vague motivation that each non-scene may have. Having Portman show up late in the movie makes sense--she's worthy of a later entrance given her comparative star wattage.

7) Actors do twirl less than they do in To the Wonder (2012), but there is one blonde stripper/actress named Karen (Teresa Palmer) who dances around in every scene much like Sarah Jessica Parker did in L.A. Story (1991). 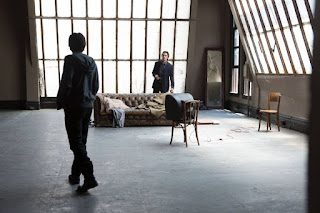 8) Occasionally, Malick juxtaposes the human-made spectacle with a natural one, cutting from a massive state of the art multi-screen concert to a desert mountain landscape so that we can compare and contrast the beauty of each.  At times, the grand long shot visual style of the movie (always happy to turn up and focus on a helicopter or a jet flying overhead) reminded me of Antonioni's L'Avventura (1960), where the composition of the shot keeps commenting obliquely on the scene and the characters (when it isn't overwhelming them).

9) Knight of Cups may one day serve as a grand and magisterially detached portrait of our era, one in which the movie's hints of depravity and existential despair may not prove as lasting as its vivid depiction of Los Angeles design and its semi-satirical portrait of the rich at play. Even with the film's Delphic voiceovers and Christian Bale's pained expressions, human characterization ultimately does not appear to matter all that much. As Karen points out, "No one cares about reality anymore" anyway.
Labels: Knight of Cups Terrence Malick