"A Dream Is Just a Dream": the Elegiac Pleasures of Cafe Society 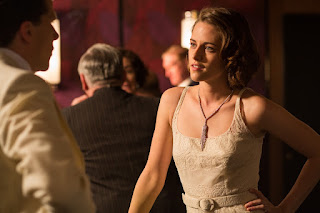 Woody Allen's Cafe Society has a wistful elegiac charm evoked by the golden sunset light of 1930s Hollywood, a fondness for glamorizing Kristen Stewart, a storyline that kept reminding me of Billy Wilder's The Apartment (1960), and an LA/New York dynamic that one finds in Allen's Annie Hall (1977). I wasn't thrilled to see the over-exposed Jesse Eisenberg lead the movie as Bobby, the innocent and nervous New Yorker thrown into Los Angeles movie star society, but he has an easy rapport with Stewart given their work together in Adventureland (2009) and last year's American Ultra.

Whereas so many recent movies leave one feeling sorry for the actors, Cafe Society keeps displaying good taste in showcasing actresses like Parker Posey (who plays Rad, a helpful socialite who befriends Bobby) and Blake Lively (who looks gorgeous as Bobby's eventual WASP wife, Veronica). While another filmmaker might've made some point about the miseries of the depression era, Allen scarcely acknowledges it, instead focusing on the gangster-infused high life of upper class New York that sometimes reminded me of the oblique social observations in Edith Wharton's The Age of Innocence. When Bobby runs into some romantic disappointment, Allen also scarcely dwells on that either, as if he doesn't have time for any moping about. We can hear Allen's voiceover as the movie builds to a romantic triangle between Bobby, Vonnie, and Bobby's uncle Phil Stern, the high-powered Hollywood agent again agreeably played by Steve Carell. After seeing Carell's work in Seeking a Friend for the End of the World (2012), showcasing an ersatz blend of soft humor and sickly apocalyptic sentimentality, I didn't have much hope for him, but he's well-suited as a surprisingly sympathetic variation of the scumbag Sheldrake in The Apartment. Given Stern's many connections to everyone in the film industry, one can see why Vonnie could like him. 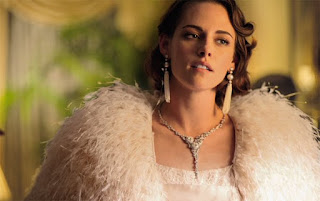 Cinematographer Vittorio Storaro understands Allen's affection for the era and his characters by keeping them beautifully lit while clad in funky 1930s fashions, listening to lots of late-night New York jazz, and watching the occasional Barbara Stanwyck snippet while making a meta reference to Billy Wilder. One gets a sense of Allen already saying goodbye to filmmaking as his characters consider their mortality. Leonard, Bobby's brother-in-law points out: "Socrates said, 'The unexamined life is not worth living.' But the examined one is no bargain." Still, Vonnie and Bobby have wistful moments of reflection of a romance that long since disappeared or transformed into married compromise that still may resonate during a New Year's Eve celebration. When Cafe Society pauses to consider what might have been, one can sense Allen positing the value of his entire oeuvre as easily comparable to Bobby's youthful moment of bliss walking along the beach with Kristen Stewart's character. When speaking of his former love, Bobby says, "A dream is just a dream," but given Cafe Society's golden-embossed sense of loss, it may matter more than anything else.
Labels: Cafe Society Kristen Stewart