The Freon Gremlin: a one act play 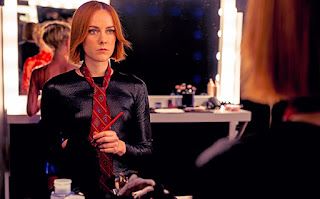 Why are filmmakers so harsh on LA? Is the city as venal, predatory, soulless, and vicious as Mulholland Drive, Maps to the Stars, Sunset Boulevard, and The Neon Demon make it appear? As someone who lives in the sweet home-spun middle-of-nowhere rolling cotton fields and gentle hurricane and Cracker Barrel-ridden flatlands of provincial South Carolina, the film doctor often wonders about the cutthroat sunny land of movie stars and swimming pools:

The curtain opens to find Jena Malone getting a massage while lying supine by her pool. The famous Los Angeles sun illuminates the scene brilliantly. A helicopter flies by, stirring palm fronds overhead. Anyone can see the famous chin of Gretchen, Donnie Darko's immortal girlfriend, still prominent under Jena's Wayfarers. A strong smell of burned flesh lingers in the air along with that of Chanel No. 5. Suddenly, Jena's Samsung Galaxy in black onyx rings. With one lacquered hand, Jena waves her masseuse away and answers:

Her agent: Ms. Malone! Guess what! Refn wants you in The Neon Demon!

Jena: Really! (she pauses) Did you see what Mr. Nicolas Winding Refn did to Kristin Scott Thomas in Only God Forgives? What kind of role does he have in mind for me?

Agent: He wants you to play Ruby, a helpful make up artist who befriends Elle Fanning's character Jesse, a young beautiful waif freshly arrived in LA from the innocent and provincial American heartland.

Jena begins to pace back and forth, the LA skyline blinking magnificently behind her as she waves one hand in the air to dry her nails. Her sunglasses glitter in the reflected sunlight bouncing off the pool: Yes?

Agent: There's one other thing. (spoiler alert) Your character turns out to be a, uh, murderous lesbian necrophiliac cannibal.

Jena: Really? Will I have many scenes amidst lots of stuffed cougars, owls, and paintings of other wild predatory animals evoking Hitchcock's use of mise en scene in Psycho?

Jena: I trust that Winding will include the requisite amount of dead bodies in this movie? He usually averages around 14-20. Will I get to decorate corpses in a morgue while wearing a stylish skirt?

Jena: Will the movie involve a long scene in which Elle Fanning's character Jesse communes with a green neon triangle for no apparent reason?

Agent: That goes without saying.

Jena: Does Refn figure that today's viewer is jaded and bored enough for this highly unlikely Grand Guignol of vicious weirdness to seem plausible, and not, say, a bit silly?

Agent: You said it. I didn't. Cannes will go for it.

Abruptly, the searing sound of clashing metal and distant screams interrupts their conversation. Jena pauses to look down 10 floors below where a 17 lane highway abuts her apartment complex. Traffic has backed up for miles, leaving smog drifting over the sun-bleached horizon. To one side, Jena notices a semi crashed into a Maserati on an overpass. Several coyotes from central casting already approach the bloodied and contorted bodies lying in a very David Lynchian way across the asphalt. Jena sighs and wonders--can she really work with that unholy overbearing Elle Fanning with her coyingly sweet public persona? Just then, one of Jena's lackeys brings out a silver tray with some indeterminate baked meat skewered on Saltines next to some olives and cocktails. Jena considers the abysmal badness of Only God Forgives, but then again, Refn's Drive is a contemporary classic. Blow sinuous winding woolly wind . . .

Jena: Ovitz, did you say Refn wants me to play a murderous cannibal?

Jena: How did he know?