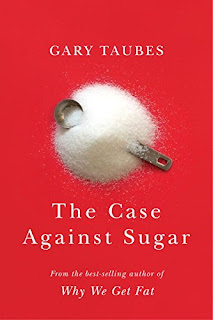 I thought I would debate the toxicity of eating or drinking sugar with my mother in an email exchange:

In the midst of so many arguments about our on-going nearly religious dietary differences, I just now enjoyed Gary Taubes' new book entitled The Case Against Sugar, a highly readable argument that seeks to diagnose the massive health damage caused by our civilization's sugar intake. Taubes provides the reader with an entire history of our culture's sugar addiction, from a period when dessert and chocolate bars did not exist all the way to today's hyper-saturated world of high fructose corn syrup and all of the other mysterious terms that tend to end with -ose that food companies sneak into their products. I've written about this toxicity of sugar before in relation to the movie Fed Up, but Taubes goes much further in his claims, relating chronic long-term sugar consumption to not only diabetes and obesity, but also to metabolic syndrome, hypertension, gout, heart disease, dementia, and cancer. Furthermore, Taubes' castigation of the big sugar's evil advertising with its bogus scientists and expert lobbyists reads exactly like Allan Brandt's book The Cigarette Century (2009) in the way that it shows that an industry will cheerfully propagandize people into poisoning themselves in the name of profits (which also brings to mind ExxonMobil's willingness to help permanently damage the planet's atmosphere again for short-term gain).

After a youth of heavy-duty sugar addiction in which I would routinely eat half a box of King Vitamin cereal after school, I did largely quit eating sugar about 3 years ago, and I lost weight and felt better about myself, but more recently, I have allowed various exceptions in that diet (Haagen dasz vanilla bean ice cream, for instance) to interfere with that resolve. Quitting sugar really makes one aware of one's addiction. It sensitizes you to the taste of sugar, and, at one point, I compared a visit to a Krispy Kreme donut shop to an alcoholic falling off the wagon (after eating two donuts, I felt sick to my stomach). Basically, Taubes' book firmed up my wavering resolve to loathe sugar again. So, having quit the stuff recently, I feel better again, but Taubes raises some key questions, such as:

1) How little sugar can one eat? He compares the question to how few cigarettes should one smoke, and says that the question is impossible to answer exactly.

2) Given that an extreme aversion to sugar obliges one to quit indulging in most processed foods or drinks, couldn't one say that one's diet has already markedly improved for that reason?

But what I like most about Taubes' book is the way he argues that while others may focus on a whole range of dietary evils such as carbohydrates, fats, meat, oils, or just plain over-eating as being responsible for the ever increasing amounts of sickly obese people in the world, Taubes keeps his focus solely on sugar. He uses many examples to expose how we tend to view diet in terms of equivalencies. For instances, take the phrase calories in, calories out. If someone eats or drinks too many calories, than that will automatically be reflected in weight gain, but Taubes writes that that kind of thinking greatly oversimplifies the complex hormonal reactions that take place when we eat or drink stuff. We also tend to think that if we eat fat, then that automatically translates to weight gain, but Taubes comes up with several examples of other cultures where the natives would eat ridiculously fatty foods and yet still stay thin, that is, until their diet becomes Americanized.

But then, that's when you would say that Taubes has been funded by the meat industry.

So, what do you think? How is Taubes wrong?

(Mother said that she will reply with a much more "balanced" case later today.)
Labels: Gary Taubes sugar The Case Against Sugar