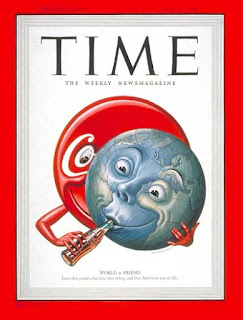 Gary Taubes' new book The Case Against Sugar gives me a feeling of intestinal control in an increasingly deranged world. Looking for a way to avoid metabolic syndrome, hypertension, heart disease, obesity, diabetes, dementia, and cancer? Taubes recommends that you cut out all variations of sugar in your diet (by the by, the image here is from a Time cover in 1950 cheerfully depicting the way Coca-Cola was taking over the world at that time). In my last post, I started a debate with my mother, who has very strong opinions about diet, but does not agree with Mr. Taubes. Here is her reply:

I am pleased that you are interested in a healthy diet. Unfortunately I do not consider Gary Taubes to be a good guide. Looking over the last 25 years or so I find that I have found some authors that have been very helpful in my quest for a healthy life.

The first was Dr. Dean Ornish whose book in 1990 on reversing heart disease with a vegetarian diet showed that blockages in coronary arteries could be reversed. My husband, a doctor, and I decided to go mostly vegetarian and liked the change. The 2nd author was David Kessler whose book The End Of Overeating (2009) was a fascinating look at America's appetite for foods loaded with sugar, salt, and fat.

The most recent authors are part of the plant based diet crew-doctors Garth Davis, Joel Fuhrman, Caldwell B. Esselstyn. The research is found in The China Study. Like Dr Ornish, Dr Esselstyn has excellent angiograms in his book showing the outcomes of a plant based diet on coronary arteries.

From a personal perspective I find the most telling argument for a vegetarian/vegan diet is the refusal to kill animals for a piece of meat on my plate. Sugar is overdone in processed food for sure, but it is not the evil that Taubes says.

love from your 74 year old mother who is still jogging, and medicine free.

My reply to her reply:

Thanks, mother, for your good points about the advantages of going vegetarian. I tried that once for a couple months, and felt so depleted, empty, and energy-less that I returned happily to mostly eating seafood when I can, in part due to the influence of the seafoodetarian named Mr. Flood in Joseph Mitchell's collection of essays Up in the Old Hotel (1993 edition).

I imagine that I very well may have blockages in my coronary arteries as a result, but you have not yet really replied to Taubes' basic point about how people are incorrect in their assumption that eating fat makes you fat. Taubes likes to point to various tribes who abruptly had their diet changed from some local fat-filled food to a much more Americanized diet, after which they became surprisingly diabetic and obese. For instance, take Taubes' discussion of what happened to the people of Tokelau, an island nation in the South Pacific.  As he writes, "through the mid-1960s, . . . the Tokelauans had subsisted on a diet of coconut, fish, pork (fed on coconuts and fish), a starchy melon called breadfruit, and another starchy root vegetable known as pulaka. The diet had among the highest fat concentrations in the world at the time--more than 50 percent of the calories consumed came from fat, and most of that was saturated fat from the coconuts" (233). And yet, with this diet, the Tokelauans ate very little refined sugar. They tended to be thin, and their health was largely good.

After the Tokelauans switched over to a more Americanized diet with less fat but far more sugar (and with more physical activity), again in Taubes' words, "diabetes prevalance shot upward. . . . Hypertension, heart disease, and gout also increased significantly . . . Both men and women gained, on average, between twenty and thirty pounds. Children, too, got fatter" (234).

Taubes blames the dramatic change in the Tokelauans on their Americanized diet, specifically on the amount of sugar that they were taking in. I could quote from many other passages in Taubes' book, but thus far you haven't really explained why Taubes is not a good guide. Why can't I eat dairy products as much as I like? What's wrong with the occasional crab cake? What do you think?