From Franklin Foer's "How Silicon Valley is erasing your individuality" 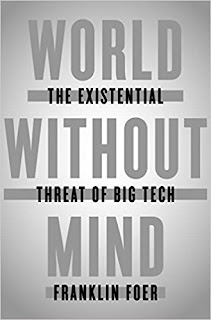 From Franklin Foer's "How Silicon Valley is erasing your individuality," an essay adapted from his new book World Without Mind: The Existential Threat of Big Tech.

"Facebook represents a dangerous deviation in media history. Once upon a time, elites proudly viewed themselves as gatekeepers. They could be sycophantic to power and snobbish, but they also felt duty-bound to elevate the standards of society and readers. Executives of Silicon Valley regard gatekeeping as the stodgy enemy of innovation — they see themselves as more neutral, scientific and responsive to the market than the elites they replaced — a perspective that obscures their own power and responsibilities. So instead of shaping public opinion, they exploit the public’s worst tendencies, its tribalism and paranoia.

During this century, we largely have treated Silicon Valley as a force beyond our control. A broad consensus held that lead-footed government could never keep pace with the dynamism of technology. By the time government acted against a tech monopoly, a kid in a garage would have already concocted some innovation to upend the market. Or, as Google’s Eric Schmidt, put it, “Competition is one click away.” A nostrum that suggested that the very structure of the Internet defied our historic concern for monopoly.

As individuals, we have similarly accepted the omnipresence of the big tech companies as a fait accompli. We’ve enjoyed their free products and next-day delivery with only a nagging sense that we may be surrendering something important. Such blitheness can no longer be sustained. Privacy won’t survive the present trajectory of technology — and with the sense of being perpetually watched, humans will behave more cautiously, less subversively. Our ideas about the competitive marketplace are at risk. With a decreasing prospect of toppling the giants, entrepreneurs won’t bother to risk starting new firms, a primary source of jobs and innovation. And the proliferation of falsehoods and conspiracies through social media, the dissipation of our common basis for fact, is creating conditions ripe for authoritarianism. Over time, the long merger of man and machine has worked out pretty well for man. But we’re drifting into a new era, when that merger threatens the individual. We’re drifting toward monopoly, conformism, their machines. Perhaps it’s time we steer our course."
Labels: Franklin Foer How Silicon Valley is erasing your individuality