From a Vulture interview with John Cleese 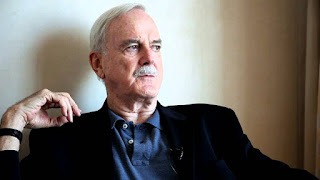 From a Vulture interview with John Cleese:

What are you working on now?

I have a show I’m working on at the moment called Why There Is No Hope.

Sounds funny.
It is funny. Some people immediately see the title as funny and other people go what?! There is no hope that we’ll ever live in a rational, kind, intelligent society. To start, most of us are run by our unconscious and, unfortunately, most of us have no interest in getting in touch with our unconscious. So if the majority of people are run by something they don’t know anything about, how can we have a rational society?
. . .

There’s absolutely nothing that gives you any hope about the future of human society?
Nothing.

So why get up in the morning?
Just because you can’t create a sensible world doesn’t mean you can’t enjoy the world you’re in. I think Bertrand Russell once said that the secret to happiness is to face the fact that the world is horrible. Once you realize that things are pretty hopeless, then you just have a laugh and you don’t waste time on things that you can’t change — and I don’t think you can change society. I’ve spent a lot of time in group therapy watching highly intelligent, well-intentioned people try to change and they couldn’t. If even they can’t change …

As someone who’s spent a lifetime working in and thanking about comedy, is there one joke you can point to as being the funniest thing that you ever said?
Interesting. It would probably have been something unscripted. Eric Idle and I were performing in Florida once, taking questions from the audience, and a woman stood up and asked me, apparently seriously, “Did the Queen kill Princess Diana?”

What’d you say?
Certainly not with her hands.
Labels: John Cleese