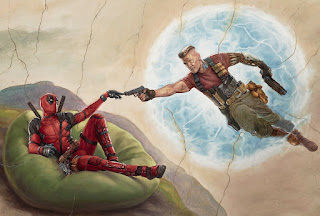 1) From now on, I'm only watching prequels, sequels, trequels, and origin stories for the rest of the summer.

2) My friend's response to Deadpool 2: "The first Deadpool was refreshing. Now, with the sequel, it's just more."

3) Never have I seen a movie with so many examples of a superhero's self-loathing. In the opening scene, he blows himself up, fragmenting himself into various crimson body parts. Later, in the midst of various action sequences, Deadpool gets mangled repeatedly like a red rag doll. He bleeds, suffers a metal bar through his head, and crumples unnaturally, his back bent, once he hits a metal table in a Supermax prison. As the blank white eyes of his mask break frame repeatedly, he makes self-aware jokes about the conventions of the movie as they happen: "Big CG-fight coming up!" or "Well, that's just lazy writing." If the movie has problems with originality, does it help us to know that the filmmakers know it too?  It's funny in the same uneasy way one may laugh as the confidence man exposes how he's tricked you out of your money. You still don't get your cash back.

4) As Deadpool works on finding enough younger people to create a franchise gang of superheroes, he hires on Domino (Zazie Beetz) an an African American super-heroine with luck as her special power. She proves to be a fine sidekick as they confront a top-security prison vehicle in order to save a young adolescent mutant Firefist (Julian Dennison). Deadpool makes jokes about "Brown Panther" in relation to his Indian cab driver Dopinder (Karan Soni), but one gets the feeling that Deadpool, as a deformed and frequently dead white guy, has already been antiquated by movies like Black Panther. He's an example of toxic ironic masculinity rotting away fast--a throwback in an industry that increasingly knows that.

6) Deadpool 2 has one very funny scene where the various would-be superheroes parachute to their gruesome fates. For example, one of them gets pureed by the blades of a helicopter, thereby satisfying any disgust with the well-worn conventions of superhero movies. Josh Brolin sneers as soldier of fortune Cable, I guess to remind us of his similar role as the heavy in Avengers: Infinity War. To satisfy the extremely short attention span of the film's jaded audience, minor characters get set on fire, suffer the fragmentation of machine gun fire, endure various knife wounds as Deadpool cheerfully refers to songs from Frozen or chants self-help bromides. At times, Deadpool 2 gives one the strong impression that the movie would only be happy if it could implode on screen. In an ancient legend, a daemon tells a king that "The very best thing is utterly beyond your reach: not to have been born, not to be, to be nothing." Deadpool would no doubt agree.

7) Yet, underlying all of the gore, the hyper-violence, and the terminal irony, we find that Deadpool really just wants to get in touch with his feelings and find his inner child in the most sickly, sappy, and sentimental way possible. For that reason, Cable carries a teddy bear on his belt as we listen to Air Supply sing "I'm all out of love, I'm so lost without you, I know you were right believing for so long . . . . "

"Studies in the inane: 12 notes comparing a purple bottle cap to Green Lantern"