"You kill and torture and you call it mercy": The Film Doctor's one sentence review of Avengers: Infinity War 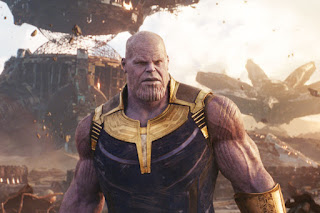 After all of the glories of Black Panther and Wonder Woman, Avengers: Infinity War suffers from the constant need to outdo itself with PG-13 torture scenes, magic spells, portals, an orchestral score thundering to keep up with each grandiose epic collision, pretentious font on the bottom of the screen designating mythic places (Knowhere, Vormir, and Zen-Whobiri), dark purple backdrops with flames providing visual contrast, superheroes asking their loved ones to sacrifice them melodramatically to save the universe, flying donut space ships, Chris Pratt grateful to just get in the occasional witty remark edgewise since jokes in the movie are enhanced by the plot's turgid slog, Thanos (Josh Brolin) looking like someone's dim uncle bullying everyone and declaiming lines like "In time, you will know what it's like to lose" and "The hardest choices require the strongest will" in his smug jock-gone-to-seed magic stone gathering way, his big boots lumbering, his fight scenes reminding me of the Rock-Em, Sock-Em robot climax of the original Iron Man (2008), his massive chin radiating grey cracks across his ponderous face, leaving me to wonder: is it worth it to have the entire Marvel Avengers franchise beat itself up apocalyptically just for him over two pseudo-final money-grubbing blockbusters, or could we bring back Erik Killmonger for his charm and far more genuine angst, or, I don't know, just let the wittier Avengers and Guardians of the Galaxy just hang for awhile in New York City and idly chat among themselves?
Labels: Avengers: Infinity War