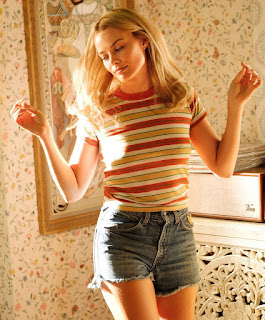 ---"I know the science is true, I know the threat is all-encompassing, and I know its effects, should emissions continue unabated, will be terrifying. And yet, when I imagine my life three decades from now, or the life of my daughter five decades now, I have to admit that I am not imagining a world on fire but one similar to the one we have now. That is how hard it is to shake complacency. We are all living in delusion, unable to really process the news from science that climate change amounts to an all-encompassing threat. Indeed, a threat the size of life itself."  --from David Wallace-Wells' "Time to Panic"

---"Children of Men: Why Alfonso Cuaron's Anti-Blade Runner looks more relevant than ever" by Stephen Dalton

---A Night at the Garden

---"At its peak the planet’s fourth most valuable company, and arguably its most influential, is controlled almost entirely by a young man with the charisma of a geometry T.A. The totality of this man’s professional life has been running this company, which calls itself 'a platform.' Company, platform — whatever it is, it provides a curious service wherein billions of people fill it with content: baby photos, birthday wishes, concert promotions, psychotic premonitions of Jewish lizard-men. No one is paid by the company for this labor; on the contrary, users are rewarded by being tracked across the web, even when logged out, and consequently strip-mined by a complicated artificial intelligence trained to sort surveilled information into approximately 29,000 predictive data points, which are then made available to advertisers and other third parties, who now know everything that can be known about a person without trepanning her skull. Amazingly, none of this is secret, despite the company’s best efforts to keep it so. Somehow, people still use and love this platform."  --Tom Bissell

---"Why I Quit Entertainment Journalism" by Phil Brown

Shroooms from C A T K on Vimeo.

---“Forget the cliché that if it’s free, ‘You are the product,’” she exhorts. “You are not the product; you are the abandoned carcass. The ‘product’ derives from the surplus that is ripped from your life.” The worst, though, is still to come, she argues, as tech giants shift from predicting behavior to engineering it. “It is no longer enough to automate information flows about us,” she warns; “the goal now is to automate us.”  --Evgeny Morozov quoting Shoshana Zuboff in "Capitalism's New Clothes"

--"It’s a great time to be someone who makes things because there are lots of places to go and they’re all hungry for content. That’s the good news. The obvious problem is how to draw eyeballs to your project against a level of competition that was unimaginable when I was coming up in the business. I would never have thought people would be targeted with so much content all day, every day. I just couldn’t have imagined it. Given it’s impossible to get eyes on everything, I think most people are looking for a filter. That can come in a variety of guises. It can be a filmmaker, it can be a genre, it could be a certain platform that you’ve become loyal to. Any of these things can help the viewer cleave their way through all of these options, but it’s hard. Like I said, it’s a great time to be making stuff. It’s just harder and harder to be the signal in the midst of all the noise." --Steven Soderbergh

---previewing Tarantino's "Once Upon a Time in Hollywood"
Labels: Notable film and media links