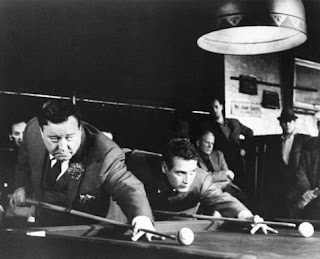 1) Can everyone now agree that the early sixties were the best years in terms of fashion? The thin black ties, the pre-Beatles hair cuts just beginning to lengthen, the tweed coats, those classically tailored Jackie Kennedy dresses, the period of Breathless and Mad Men?

2) Adapted from a novel by Walter Tevis and directed by Robert Rossen, The Hustler takes on alcoholism, existential meaninglessness, suicide, and the antihero conman in the form of Paul Newman, but it is also a gorgeous film with lush black and white cinematography by Eugen Shufftan. Made in , The Hustler tends to favor angled shots that partially look down a street, the length of a bus station, or a pool table. Its opening credits sequence uses a montage with a jazz soundtrack so that each shot freezes before cutting to the next one. How many 1970s TV shows used the same semi-nostalgic technique in their opening credits sequence? It is fun to hunt around Youtube to verify this point. Check out Hawaii Five O and The Mod Squad.

3) By today’s standards, The Hustler’s bleak blend of Albert Camus’ The Stranger with On the Waterfront and The Lost Weekend seems almost quaint. Fast Eddie (Newman) no sooner gets beaten by Minnesota Fats (Jackie Gleason) in a 36 hour game of pool than he decides to dump his manager/partner Charlie (Myron McCormick) and find a girl. You would think with his movie star good looks, Eddie wouldn’t have difficulty finding someone as cute as he is, but he goes for the alcoholic and lame, but otherwise attractive Sarah Packard (Piper Laurie), whom he finds in a bus station. She likes to hang out in the station café, reading a book, until the local bars open. Later, they share a comical parody of domestic bliss that she characterizes as a “contract of depravity,” where all they do is get drunk and sleep together. And yet, the film is so skillfully lit, their bleak acts are almost endearing.

4) What matters in the world of The Hustler? That you maintain your composure and don’t become someone’s supplicant. Eddie loses his cool during his first pool game with Minnesota Fats. Looking relaxed and graceful on his feet, Jackie Gleason periodically freshens himself up, washes his face, fixes his tie, and then holds out his hands to have one of his lackeys sprinkle white powder on them for the next game. As Eddie gradually gets drunk and sloppy in the opening match, stays collected throughout. What matters is “character,” as Bert Gordon (George C. Scott) points out, and character is a matter of maintaining proper sangfroid no matter what con is going down. Later, when Eddie begs Bert to give him money to try to beat a man (curiously, Murray Findley, Mr. Robinson of The Graduate) at billiards, Sarah notes what Bert has reduced Eddie to—someone pleading for one more try.

5) How is Eddie an antihero? Well, aside from being a hustler, he does tell his former partner Charlie to “Lie down and die by yourself. Don’t take me with you,” when Charlie arrives at Sarah’s flat to beg for him to return to their former ways. When Sarah drunkenly types out their “contract of depravity” in their grim little flat, Eddie slaps her when she calls him a “bum” (a hint of On the Waterfront). She looks at him dry-eyed and says, “Do you expect me to cry?” Somehow, all of Eddie’s dastardly behavior does not fully register given Newman’s charm.

5) How can you tell Sarah will commit suicide? She often likes to face away from Eddie in the midst of their discussions. Later you realize that her characteristic gesture is a form of facing the wall. What does she write with lipstick on the mirror before slashing her wrists? “Perverted, Twisted, and Crippled.” She’s mostly referring to Bert and the world of hustlers all being dead inside due to their falsified emotions. Again, in spite of the fact that she’s right, I find George C. Scott enormously compelling as Bert Gordon, the man who knows all the angles, the operator who can tell a winner from a loser at pool. So he’s soulless and dead inside; he’s also being played by Scott at the peak of his career.

6) After Sarah’s suicide, does Fast Eddie find redemption? Kind of. He does return to Ames Billiard Hall to beat Minnesota Fats soundly. After much discussion, Bert Gordon does let him keep the money, but he forbids Eddie from ever entering a major pool hall again. This movie would never give him that kind of unqualified happy ending, and besides, he has lost Sarah’s love, so that makes hustling something of a moot point.

7) So what is The Hustler really about? Walter Tevis described Eddie as an artist figure. In the DVD commentary, Robert Rossen’s daughter describes the hustle as a metaphor for “winning and making it in .” Paul Newman shows how hustling suits the charm of his acting ability, but mainly The Hustler concerns the pleasures of gambling, smoking, drinking whisky, and playing high-level pool in a zone serenely free of the duties and cares of the outside world. In this way, Rossen suggests how pool serves as a metaphor for excellent filmmaking. As Fast Eddie says to , “Fat man, you play a great game of pool.” Even though he just lost untold thousands of dollars, nods graciously, holds up his drink in salute, and replies “So do you, Fast Eddie.”