Bonnie and Clyde, Pauline Kael, Lester Bangs, and the Stooges 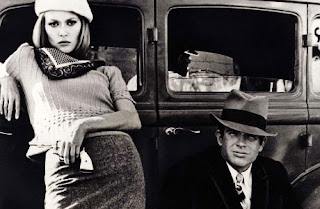 At the end of a positive review of the Stooges written for Creem in November of 1970, Lester Bangs summarizes his argument with:

"Yet somehow I still hear a horde of sluggards out there whining "Are you putting me on?" Or, more fundamentally, haven't the Stooges been putting us all on from Yelp One? And the answer, of course is Yes. Because, as beautiful Pauline Kael put it in her characteristically epigrammatic way: 'To be put on is to be put on the spot, put on the stage, made the stooge in a comedy act. People in the audience at Bonnie and Clyde are laughing, demonstrating that they're not stooges--that they appreciate the joke--when they catch the first bullet right in the face.'

Some of the most powerful esthetic experiences of our time, from Naked Lunch to Bonnie and Clyde, set their audiences up just this way, externalizing and magnifying their secret core of sickness which is reflected in the geeks they mock and the lurid fantasies they consume, just as our deepest fears and prejudices script the jokes we tell each other. This is where the Stooges work. They mean to put you on that stage, which is why they are super-modern, though nothing near to Art. In Desolation Row and Woodstock-Altamont Nation the switchblade is mightier and speaks more eloquently than the penknife. But this threat is cathartic, a real cool time is had by all, and the end is liberation."

I wonder what movies and rock bands, if any, put the audience on the spot in this way today?
Labels: Bonnie and Clyde Lester Bangs pauline Kael stooges