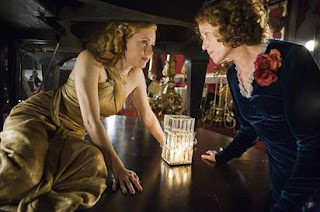 ---What are the "fifteen key ingredients of a grim art movie"? Feral children, wretched elderly, ill animals, naturally, but unattractive nudity? Writing for The Guardian, Catherine Shoard lists them all in "For Your Displeasure."

---Writing for Sergio Leone and the Infield Fly Rule, Dennis Cozallio, celebrates a late '70s trio of comedies that serve up a "classically framed, goosed-up examination of American obsession, desire and panic." I especially like his discussion of Used Cars (1980).

---Jason Bellamy of The Cooler debates "How long should you sit through a bad movie?" Last night, I found myself unavoidably compelled to fry some bratwurst while kind of watching the sadly forgettable and predictably farcical Miss Pettigrew Lives for a Day, but I don't know if that answers his question.

---Check out Dan North's shot-by-shot dissection of Melies' A Trip to the Moon in his entertaining new blog Spectacular Attractions.

---I have taught Hitchcock's superb Notorious (1946) for years, and have yet to get anywhere near exhausting its nuanced use of mise en scene. Writing for Screen Savour, T. S. notes how "[Notorious] well may be considered [Hitchcock's] crowning achievement in terms of sheer synthesis." For those of your most interested in Hitchcock's later, more dubious fixations, Ann Thompson considers Donald Spoto's new book Spellbound by Beauty: Alfred Hitchcock and his Leading Ladies.

---Chuck Tryon of The Chutry Experiment located a Ron Howard video endorsing Barack Obama. Regardless of the politics, I found the whole idea of Mr. Howard revisiting his earlier selves as Opie and Richie oddly moving, especially in the way he acknowledges the passing of time.

---Lastly, for those in love with Don Draper of Mad Men, and for those who would like to emulate him, a special treat.
Labels: Alfred Hitchcock notable film links