Complicating our responses: 11 notes on the DVD version of A Streetcar Named Desire 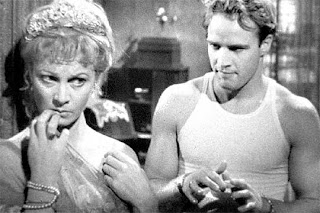 Full disclosure: I gleaned much of this information from the documentaries that accompany the two-disc special edition of Warner Brothers’ A Streetcar Named Desire.

1. From Pauline Kael’s review of Hud : “when I saw the movie version of A Streetcar Named Desire, I was shocked and outraged at those who expressed their delight when Brando as jeered at Blanche. At the time, I didn’t understand it when they laughed their agreement as exploded in rage and smashed things. It was only later, away from the spell of Vivien Leigh’s performance, that I could reflect that Stanley was clinging to his brute’s bit of truth, his sense that her gentility and coquetry were intolerably fake. And it seemed to me that this was one of the reasons why Streetcar was a great play—that Blanche and Stanley upset us, and complicated our responses.”--from For Keeps, Dutton, 1994.

2. Why watch James Dean’s entire oeuvre when you can watch it all encapsulated by Brando’s performance as in Streetcar? With quicksilver speed, Brando shifts from swaggering abusive machismo to motherly concern to weeping vulnerability to childlike joy. Best example: in scene three, Brando’s moves from his drunken abuse of Stella, to remorseful weeping over her loss, to playing a kind of buff Romeo kneeling before Stella on the steps, and his version is all the more moving because he’s relatively inarticulate.

3. Paul Newman once said that Brando was able to effortlessly act out what took him (Paul) much labor to produce.

4. As the original Blanche in the Broadway production, Jessica Tandy was trained in the British style of acting that relied upon gesture and consistent blocking. With his Method techniques, Brando grew bored with performing each scene the same way every night, so he would make small changes and therefore throw Tandy off-balance. One night, in the midst of the play but behind the scenes, he managed to have someone punch him in the nose, breaking it. Then he had to end the play with a bloody towel over his face.

5. When Warner brothers studio brought in Vivien Leigh to replace Tandy in the film version of Streetcar, Tandy was likely hurt by the decision, but Karl Malden justified the change as necessary. They needed to bring in a bankable star to offset the rest of the relatively unknown cast. Both and Brando would argue about who was better for the role of Blanche. They agreed that Leigh performed it in a sexier way, with hints of Scarlet O’Hara in her flirtations.

6. was initially reluctant to direct the film version of Streetcar, but he accepted in part so that he could shift the balance of the play back towards Blanche after Brando clearly dominated the Broadway production. As a director, scorned story boards (take that, Hitchcock) in favor of allowing his actors to help create the arrangement of each shot. For this reason, relied on a lot of close ups and compositions that emphasized the actors instead of the mise en scene. This tight focus combined with the dark cinematography and grunge made for a peculiarly claustrophobic film. will later widen his focus considerably to take in the skyline in On the Waterfront.

7. Who is Blanche? A fallen aristocrat perhaps, a sensitive soul, an artist, just an artiste, a supremely useless person, or a “tender and trusting” figure who represents what happens to sensitive souls when brutalized by the of the world? She’s also manipulative, an acknowledged liar who tries to turn her sister against . characterizes the thought of Mitch marrying her as jumping into “a tank with a school of sharks.” One wonders how Mitch and Blanche would have fared as a married couple.

8. Brando managed to get Tennessee Williams’ support for the role after he fixed the electricity and the plumbing in a house that Williams was visiting at the time. Someone on the DVD claimed that Williams was in love with Brando but not physically.

9. Williams inserts the theme of homosexuality obliquely into the play. In the original script, Blanche mentions how she found her husband in bed with another man. Then, when she confronts him about it by saying “I saw! I know! You disgust me,” he shoots himself in the mouth with a revolver. Meanwhile, Williams characterized himself as having much in common with Blanche, thus making a kind of ultra-butch fantasy of macho domination?

10. Meanwhile, the Hays office and the Catholic League of Decency censored the film to the point where Blanche seems to scorn her husband because he’s a poet.

11. Nowadays, as one watches the changes between versions in the DVD documentary, the censors just end up looking silly. So they cut the look of lust in Kim Hunter’s eyes as she walked down the steps to in his wet t-shirt. Also they managed to get Stella to leave with the baby at the end (to punish ), but it seems unlikely she will stay away for long. Even in its butchered original release form, as Richard Schickel points out on the DVD, the film’s message still comes through.