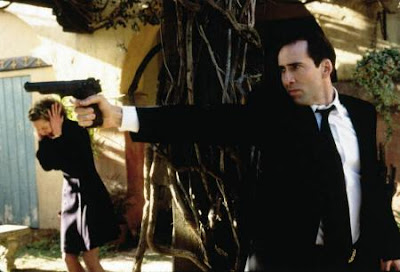 [Now that John Woo's "next" film 1949 was recently cancelled (an increasingly typical problem, according to Twitch), we can return to 1997, when the Film Doctor considered Face/Off in this of-the-period review.]
John Woo, the director of Broken Arrow, is known for his graceful action sequences.  I would call it balletic violence.  You walk away from Face/Off with images of men flying in the air, either to the side to evade fire, or jumping off of oil rigs in their bare feet, or propelled by a jet engine into a wind tunnel, or blown from an exploding speed boat onto the beach.
Woo's action scenes are frequently frictionless and oddly lyrical.  We witness a violent FBI takeover of a criminal's lair from the perspective of a child wearing headphones and listening to "Over the Rainbow."  With the gunfire and screams of death agony muted and the music swelling, Woo attains operatic effects reminiscent of Baz Luhrmann's Romeo + Juliet hardwired to the hyperviolence of Pulp Fiction.  Watch the men fall through roof windows amidst a spray of broken glass, watch the gunfire light up like fireworks against the metal machinery behind them.  It's aestheticized gore.  Later we even see bullets fly out of the guns in slow motion as villain and copper alike twirl to shoot everyone in the room simultaneously.
This would be enough, but amazingly, given this summer's track record, Face/Off has a coherent screenplay!  The arch-villain Caster Troy, played with relish by angular-faced Nicolas Cage, trades faces with the revenge-obsessed-FBI-agent Sean Archer, played by the more cuddly John Travolta.
We first see Caster sniper shoot Archer's infant son on a merry-go-round in his attempt to assassinate his arch-nemesis, and then the film cuts to nine years later, with Archer trying his darndest to bring terrorist Troy to justice by playing chicken with a jet.  For his few minutes of villainry, Cage is delightful.  He wears one of those long cattle-ranch coats one sees in J Peterman catalogs, cowboy boots, and two fancy gold-plated pistols in a back-holster.  His evil minions routinely hand him a kind of black communion box full of Chiclets, joints, assorted pills, and a thick wad of cash.  Troy is an old spaghetti western kind of villain with a modernized appetite for drug-addled killing, molesting, and eventually blowing up LA.
But then he gets thrown into a coma by a jet engine, and Archer, the impulsive FBI guy who made me think of Waco, stupidly agrees to have Troy's face surgically replace his just so he can go to a high security jail and learn the location of the bomb that's going to blow up LA.  Then, Caster unexpectedly wakes up from his coma without a face (yuck) and forces the surgeon to put Travolta's face on him, thus taking over the FBI man's identity.
This identity-switching treats the audience to two good actors abruptly shifting roles in mid-movie.  Suddenly, Travolta laughts it up as the bad guy with a very handy FBI job and a new wife and teenage daughter, and Cage lies cursing his bad luck in a high tech prison, much as he does in Con Air.  We see both men assume their new roles gradually, with some awkward moments.  Travolta drives right past his wife and home.  Oops!  Cage takes awhile to wake up to the demonic pleasure of a prison riot.
In the end, the action formula of violent climax leading to a final chase scene still holds, but Woo just does a better job dazzling us with the possibilities within the convention.  We see Cage and Travolta face off towards the end, guns pointing at each other, and then four other people pull out guns, all of them facing every which way, until Travolta laughs and says "What a predicament!"  He comments, as it were, on Wood delightfully exaggerating the action cliche.
Soon after, the speed boat sequence accomplishes in 10 minutes what Speed 2 could not achieve in 2 hours.  The entire movie has a well-dressed, gun-metallic, professional sheen.  If you can stomach the sometimes gratuitous blood and gore, I think Face/Off will prove the best action film of the summer.
Labels: Face/Off

Kevin J. Olson said…
I remember seeing this movie twice in the theaters. It was Nic Cage's summer of action with this and Con Air, and I was first in line for both films (naturally since I was 15 when these came out).

Face/Off was a unique action film for American audiences in 1997; it combined some of the better elements found only in Woo's previous Cantonese pictures. This was kind of the swan song for Woo's "greatness" (although I kinda liked Mission Impossible 2). It's too bad, really, because I always liked Woo's films as an exercise in the genre -- and as you state, they were like violent ballets.

I'll always have a place in my heart for the over-the-top melodramatic action of a Woo film, especially Hard Boiled and The Killer, and his best American film Face/Off.

The Film Doctor said…
Thanks for your comment, Kevin.

I need to look into The Killer. I like the way Woo maintains an auteur-like recognizable brand of filmmaking. I hope that his recent problems with new projects are only temporary.
April 10, 2009 at 12:49 PM