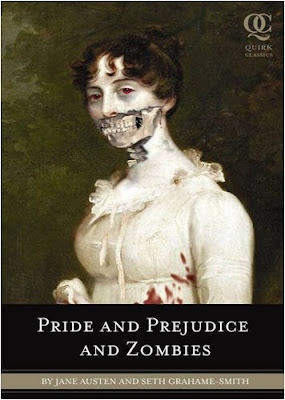 ---I've been working on my Portrait of the Artist as a Young Zombie for weeks now, but until that gets published, you can read about the brilliant gestation of Seth Grahame-Smith's Pride and Prejudice and Zombies here.  As he says,

"It was strange. It's almost as if Jane Austen was subconsciously setting this up for us. You have this sharp-tongued, fiercely independent heroine. It's not a huge leap to say she's a sharp-daggered, fiercely independent heroine. And then you have Darcy, on the other side, who's a pompous and privileged guy. And you say, all right, he's a pompous and privileged slayer. And that's how they battle it out with each other.

But then you have little details everywhere, like the fact that there are soldiers encamped near Meryton in the original book, for seemingly no reason whatsoever. I mean, there's just this huge regiment of soldiers there, and the obvious thing to do in this case is to say that, well, they're there digging up graves and burning bodies and fighting the unmentionable menace."

---Perhaps the secret of Nicolas Cage's curious longevity as a film star can all be attributed to his hair styles?

---I like Tom Carson's troubled take on Disney's Pinocchio:

"Not much less startling to someone who hadn't seen the damn thing in decades is just how graphically the Pleasure Island crew's metamorphosis into jackasses—those upthrusting donkey ears, those tails bursting through clothes—turns the onset of puberty into an adventure in terror. But that's still poetry compared to all the stray bits of lewdness stuck in for the adult audience's benefit. Among the weirder gags in a picture not short on them is the seductive girl fish who looks on encouragingly as Jiminy Cricket tries to ballast himself underwater, sticking a rock in his hat before, sheepishly explaining "I put it in the wrong end," he finds the right place: his pants."

---So what makes excellent film criticism?  Check out Matt Zoller Seitz's series on Wes Anderson entitled "The Substance of Style":

"Anderson’s scavenger-hunt aesthetic stands him in good company, alongside Quentin Tarantino, David Gordon Green, James Gray, and the other Anderson, P.T. But what makes Wes Anderson distinctive is the sheer range of art that has fed his imagination—not just recent American and foreign films, but films from 30, 50, even 70 years ago, plus newspaper comics, illustrations, and fiction. The spectrum of influence gives his work a diversity of tone that his imitators typically lack. It is a style of substance. "

---Meanwhile, Lauren Streib, writing for Forbes, points out that journalism schools are booming as journalists working for actual newspapers are getting fired in record quantities.  Do all of those new journalism majors know something that we don't?

---I like Jim Jarmuch's 5 rules for directors, as quoted in Row Three:

3) The production is there to serve the film.

4) Filmmaking is a collaborative process.

---Stefan Kanfer contributes a taste of his Marlon Brando biography for Film in Focus:

"As rehearsals for The Godfather began, Brando's co-workers gave him a wide berth. Pacino could barely articulate his feelings: `Have you any idea what it is for me to be doing a scene with him? I sat in theatres when I was a kid just watching him. Now I’m playing a scene with him. He’s God, man.'

Watching the cast behave with such gingerly respect, the producer Albert Ruddy remarked that `in a sense Marlon had created these guys,' and Mario Puzo concurred: `Marlon was the one guy with whom they all wanted to act, and here was their chance.' They remained stiff and unnatural around their favourite until he began cracking jokes and making faces and `unfroze them. No attitude, no superiority. He was a superstar, all right, but from that point on he was first among equals.'"
---So what is the coolest new Japanese anime series that combines Donnie Darko with Iraq?  Movie City Indie suggests it is CatShitOne.
---Lastly, thanks to Cine-O-Rama, Flickhead, and Screen Savour for accepting my challenge to choose their 10 favorite film characters.
Labels: Notable film and media links

Richard Bellamy said…
Portrait of the Artist as a Young Zombie - very clever! It would sell!

I've been aware of the emergence of the zombie genre - trying to compete with the deeply intrenched vampire genre - and I haven't been interested in the slightest. But I think I have to read P and P and Zombies. Just what that novel needed!
April 7, 2009 at 9:25 PM

The Film Doctor said…
For some reason, I find that I like zombies more and more. They make for convenient villains. They hint at some apocalyptic near future when masses of people wander the countryside in search of food (not hard to imagine). They helped George A. Romero launch a highly lucrative career with little money. Carnival of Souls is one of my favorite movies. What's not to love about them?
April 8, 2009 at 8:39 AM