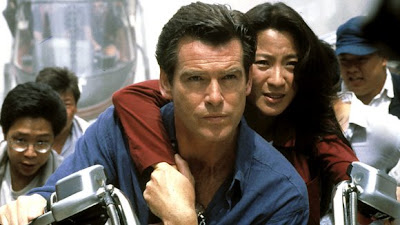 [Another time-capsule review from my preblogging days]
Some movies have the weight and consistency of cotton candy in a plastic bag that you hope hasn't mildewed for too long. Such could be said for the new Bond flick with its portentous but meaningless title Tomorrow Never Dies. After the sad and ignominous early retirement of Timothy Dalton (I think for lacking some sort of inexpressible Bond flair), Pierce Brosnan's Golden Eye made more money than any other Bond film. Now he's back, awkwardly straddling the line between dated machismo fantasies and present-day political correctness. Thus the head of the British Secret Service is now a grey-haired matriarch M (Dame Judi Dench) who trades gendered barbs with an admiral (He says "Sometimes I don't think you have any balls." She snaps back "At least I don't have to think with them all of the time.")
Also you have a Hong Kong fighter Wai Li (Michelle Yeoh), a valuable loan from the karate world of Jackie Chan. Of course, Bond still beds the occasional gorgeous groupie, but he has to be more sensitive these days. No more "Pussy Galore" as in Goldfinger. His inherent chauvinism must appear light, cavalier, and ironic, and he'd better show off his hairy chest as often as possible.
Brosnan makes a good Bond if only because he knows the Cary Grant principle of less is more in acting. While George Clooney practically rolls over and begs, panting on your leg in his urge to ingratiate, Brosnan simply arches one eyebrow, makes product endorsements for Smirnoff vodka, and moves his impassive chiselled features into a better light. He's very good at looking cool in a suit under fire. While dodging machine gun bullets, he cares more about the way his shirt cuffs peek out from his suit sleeves than about any mortal peril.
The plot of Tomorrow Never Dies combines elements of The Peacemaker (terrorist arms in Russia) with Citizen Kane (media magnate manipulates press). There's got to be a maniacal rich fellow in the mix (Elliot Carver, played by Jonathan Pryce) who seeks world domination, this time through satellites and tabloid newspapers. Bond takes valuable time off from bedding Swedish instructors to battle this brilliant foe.
He gets a fancy BMW, another product endorsement, from doddering but still standing Q ("007, will you ever grow up?"), and enjoys driving it by remote control in a high rise parking lot while sitting in the back seat, looking much like a kid with his new Game Boy. Carver, meanwhile, owns a Stealth boat that looks like a big black paper mache turtle stirring up trouble in the Chinese seas.
As he spies on Carver, Bond keeps running into Wai Lin, a parallel undercover agent for China. They jump off a skyscraper together (clinging to a banner), ride through Saigon on a motorcycle together (she wants to steer), fight the evil warlord together, etc., etc. The Rupert Murdoche-like villain follows key rules of his trade: 1) Never kill Bond outright upon his capture; 2) Always invite him up to the command room and brag until Bond figures out a way to escape; 3) Repeat steps one and two with daunting self-confidence, not matter how many captures, until Bond finds some creative way to grind him up like hamburger.
There are some amazingly clunky scenes in the latter half that reminded me of a 14 wheel semi trying to waltz with a Greyhound bus during rush hour--one involves a helicopter threatening our hero with its perpendicular blades spinning on a busy street in Saigon. Sometimes you can tell during a "tense" action sequence that people went through a lot of trouble to dangle a nuclear missile just so as Bond and some Nazi punch each other over the ticking detonator as the metallic Batman-like set goes up in flames. These moments have all of the spontaneity of a World Wrestling bout.
On the plus side, Michelle Yeoh acquits herself well as a butt-kicking femme. She kicks people in the head with aplomb and you can tell she's thrilled to help destroy expensive sets. She puts on a good fight for womankind, but Bond insists in his patriarchal patronizing way on ultimately saving her and the universe. In its high camp silliness, Tomorrow Never Dies keeps the Bond franchise alive. Beware of empty calories.
Labels: Tomorrow Never Dies

Rick Olson said…
A fine review of not one of the better films in the Bond canon. As you say, and cuttingly illustrate, it's not a question of how original the Bonds are but how well they execute the cliches.
April 29, 2009 at 11:01 AM

The Film Doctor said…
Thanks for your comment, Rick, although the film blogosphere has such masterful writers today, it's humbling to look back at my old work.
April 29, 2009 at 7:50 PM