Teenaged Bait: Kevin Williamson's I Know What You Did Last Summer (1997) 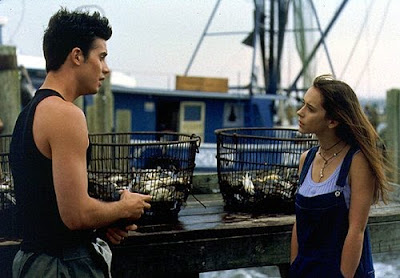 How much does the upcoming Sorority Row steal from the 1997 horror film I Know What You Did Last Summer? Here's my time capsule review from 12 years ago:
Here's the hook: after a romantic visit to the beach, two teenage couples are driving home on a winding two lane highway. The drunken quarterback (Ryan Phillipe) stands up in the sun roof and accidentally drops his bottle of Cutty Sark on top of the driver just before they hit something, sending the car into a tail spin. They get out to find a dead man lying in a ditch, his face covered with blood.
What to do? Why not drop the body off the edge of a pier so that crabs and squids, maybe even an obliging shark will chew it up for weeks before it is found? With much debate and soul-searching, they try this, only to have the man wake up just before they shove him off the dock. They then swear to "carry their secret to their graves."
Cut to one year later. One of the girls, played by Party of Five's Jennifer Love Hewitt, mopes around college much like Winona Ryder did back in Beetlejuice, all brunette bangs and morbid guilt-ridden sulk. She returns home to her concerned Ma just to find a mysterious letter saying, you guessed it, "I know what you did last summer."
So begins Halloween's highly pedigreed screamfest of the week. The writer Kevin Williamson seems to have rattled off this screenplay just after the deliciously self-referential and very successful Scream and just before Scream 2, due out in December. Scream skillfully resuscitated the tired horror genre by ironically pointing out every rule and convention of the form even as it dished up creative blood and gore: one girl dies by garage door opener; another man screams at Jamie Lee Curtis to look behind her on video just as the real murderer comes up behind him. Scream was full of mirror-like scenes like this, immersing the viewer in a whole tradition of scary movies and parodically commenting on all of them.
In contrast, Last Summer sticks more to the basic formula, but I could still appreciate the movie's knowing manipulation of one's expectations. The fisherman killer and note writer, immediately iconographic in his slicker, rain hat, and carrying a large hook, takes pleasure in simply messing with the two couples. The quarterback gets rammed into a warehouse by his own car, breaking his arm. Hewitt's character finds a former friend of hers, Max, dead in his car trunk with a bunch of crabs chewing on his corpse. The local North Carolina fishing town beauty queen of the group (Buffy the Vampire Slayer's Sarah Michelle Gellar) wakes up one morning to find her previous blond locks cut up like "cole slaw." That bastard fisherman! As in Scream, there's one young man (Freddie Prinze Jr.) who could easily be the killer himself.
We learn of different ways to kill someone quickly with a meat hook: impale under the chin? Strike up through the rib cage? One older sister gets stabbed and then dragged like so much meat across the floor of a darkened women's clothing store.
The two teenaged girls try investigating the killer by visiting Anne Heche out in her spooky, dusty house in the sticks. For her few moments of screen time, Heche delivers a delightfully disturbed vision of semi-distracted white trash grief. Hewitt and Gellar spend their time together speaking in rapid-fire wispy voices, trying in their Valley Girl prom queen way to find the killer before he kills them. Meanwhile, the killer quickly moves beyond simple revenge to slashing everyone in sight, thereby diluting the somewhat original storyline into a more typical slasher bloodbath, but I don't think the young audience of this movie will care. Kevin Williamson serves up his Psycho cliches like a delectable shrimp cocktail, well-chilled in a meat locker.
Labels: I Know What You Did Last Summer