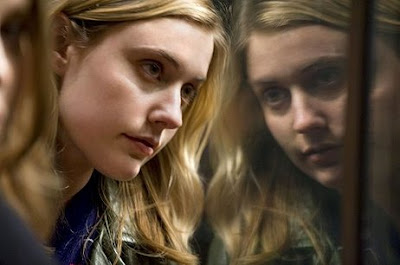 ---when Lynch met Lucas
---Tom Bissell's addiction to video games:
"Writing and reading allow one consciousness to find and take shelter in another. When the minds of the reader and writer perfectly and inimitably connect, objects, events and emotions become doubly vivid – more real, somehow, than real things. I have spent most of my life seeking out these connections and attempting to create my own. Today, however, the pleasures of literary connection seem leftover and familiar. Today the most consistently pleasurable pursuit in my life is playing video games. Unfortunately, the least useful and financially solvent pursuit in my life is also playing video games. For instance, I woke up this morning at 8am fully intending to write this article. Instead, I played Left 4 Dead until 5pm. The rest of the day went up in a blaze of intermittent catnaps. It is now 10pm and I have only just started to work. I know how I will spend the late, frayed moments before I go to sleep tonight, because they are how I spent last night and the night before that: walking the perimeter of my empty bed and carpet-bombing the equally empty bedroom with promises that tomorrow will not be squandered. I will fall asleep in a futureless, strangely peaceful panic, not really knowing what I will do the next morning and having no firm memory of who, or what, I once was.

The first video game I can recall having to force myself to stop playing was Rockstar's Grand Theft Auto: Vice City, which was released in 2002. I managed to miss Vice City's storied predecessor, Grand Theft Auto III, so I had only oblique notions of what I was getting into. A friend had lobbied me to buy Vice City, so I knew its basic premise: you are a cold-blooded jailbird looking to ascend the bloody social ladder of the fictional Vice City's criminal under- and overworld. (I also knew that Vice City's violent subject matter was said to have inspired crime sprees by a few of the game's least stable fans. Other such sprees would horribly follow. Eight years later, Rockstar has spent more time in court than a playground-abutting pesticide manufactory.) I might have taken better note of the fact that my friend, when speaking of Vice City, admitted he had not slept more than four hours a night since purchasing it and had the ocular spasms and fuse-blown motor reflexes to prove it. Just what, I wanted to know, was so specifically compelling about Vice City? "Just get it and play it," he answered. "You can do anything you want in the game. Anything."
---screenwriting as literature:
"Audiences don’t know somebody sits down and writes a picture,’ observes Sunset Blvd. protagonist, struggling screenwriter Joe Gillis – ‘they think the actors make it up as they go along.’ Sixty or so years later, it’s probably even easier to find oneself entranced by the latest impeccably produced offering and forget that a writer had to sit down at a desk hour after repetitive hour and write the damn thing one word at a time.Perhaps we shouldn’t be surprised that the screenwriter’s art is an unseen one. ‘The challenge of screenwriting,’ Raymond Chandler proposed, ‘is to say much in little and then take half of that little out and still preserve an effect of leisure and natural movement.’ The next time you’re sitting in that cinema seat, letting the enchanting ‘effect of leisure and natural movement’ wash over you twenty-four times per second, you might want to remember Joe Gillis and his unread poetry."
---Mamet's brief guidelines for screenwriting
---the greatest film scenes ever shot
---manufactured demand and the story of bottled water
---Anna Quindlen and others share how they consume their media diet
"Late morning I move four flights up to my home office, which is where I do my online newsgathering. I have bookmarks for The Huffington Post, Daily Kos, Politico, and the Times and Washington Post Web sites. I also read Romenesko, the inside-baseball column of the news biz, and the FT, which now provides some of the best coverage of American politics.

My world is divided into those people who won't admit they read Gawker, and those who will; I'm in the second group. I also read an extremely clever and well-written fashion website called Go Fug Yourself. I even write the two women who run it mash notes when they're especially good. I hate the way people in the news business act as though all their site surfing is high-minded.

End of the work day and I'm back downstairs in the dining room, back in print. The magazines have come in the mail: Newsweek, The New Yorker, Vanity Fair, and, yes, People. I read them all, as well as Fortune and Runner's World. I watch one of the evening newscasts, usually NBC because I think they have the deepest bench. After dinner my husband and I turn on MSNBC: Olbermann, Rachel Maddow. It's preaching to the choir, but as members of that choir we like being preached to. During the presidential election I watched Fox a lot because I thought I should know what their people were saying.

Books in bed--that's how I always finish the day. I read very little nonfiction now that I'm not writing a regular column, although I just finished Game Change, which I thought was much more serious than the news reports suggested. When I'm revising a novel I always read mystery fiction: Henning Mankell, Denise Mina, P. D. James. The rest of the time I read whatever galleys I've been sent, and I reread the classics. Right now I am rereading Moby Dick alongside a new nonfiction book called The Whale. I don't have a Kindle, although I may reconsider because of a nightmarish trip during which my only airport newsstand option was a paperback by a writer who seems to have italics and exclamation points permanently programmed into his computer."

---a student dares to question secret ingredients in school food

"AVC: To the extent that mumblecore was or is a movement, do you feel that initial energy has dissipated as people move off in different directions?

I do think it has dissipated, but I think it dissipated a while ago in a lot of ways. I think, the truth is, the movies I’ve done that people consider mumblecore-y, namely Hannah, Nights And Weekends, and Baghead—I guess Yeast is in there, but less so —they were done over a six-month period. Which is before anyone saw them. They were all completed before anyone saw them. I completed the first half of Nights And Weekends before anyone had even seen Hannah. I think the energy had dissipated before that, but I think in general with micro-budget films right now, it’s rough. The economy is rough. I think that affects everyone from big filmmakers to tiny filmmakers. A lot of my friends are struggling. This was the first fall that a lot of my friends didn’t make movies, which was really hard and sad. I’m good friends with this film collective, Red Bucket, which made Daddy Longlegs and The Pleasure Of Being Robbed. They’re climbing the walls. They’re all making cartoon booklets now, because they can’t raise the funds to make another movie. But I think that when it returns, which it hopefully will, there will be another surge of energy. And I think I’m pretty committed to staying. I’m not committed to not doing big movies, but I am committed to continuing to make smaller movies, not for the sake of making smaller movies, but because I think it’s really invigorating to just go work with people and know that it might be awful. And that’s okay, because it didn’t cost that much to make."
---LSD and the CIA