How to foul up a classic: 11 notes on Tim Burton's Alice in Wonderland 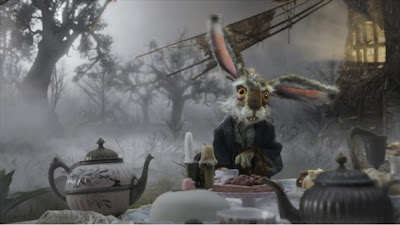 How many ways can a 3-D movie foul up a classic children's book? Let me count the ways.
1) The back story. In Lewis Carroll's original 1865 version, 7 year old Alice falls down the rabbit hole within the first 2 pages. In Burton's version, the 19 year old Alice loses her father, gains a suitor asking for her hand in marriage, discovers that her sister's fiance is fooling around her, and suffers about 15 other subplots just so she can appear authoritative and empowered when (spoiler alert) she returns to her 19th century "reality" by the end of the film.
2) The fall itself. In the book, Alice "fell very slowly, for she had plenty of time as she went down to look about her, and to wonder what was going to happen next." She falls so slowly, she grabs a jar of marmalade from a shelf, looks at it, and places it back on another shelf inside the tunnel. In the movie, Burton prefers speed and distraction, so Alice plunges as if she is on a World Disney ride.
3) The merging of Alice's Adventures in Wonderland with Through the Looking Glass. Just as in the 1951 Disney animated Alice in Wonderland, there's no attempt in Burton's version to distinguish between the two works, even though Looking Glass was published 6 years after Wonderland, and it has considerable differences of tone and theme. Carroll designed Through the Looking Glass around a chess game, while Wonderland chiefly used a deck of cards to create the royal hierarchy around the Queen of Hearts. The glib combination of these worlds in Burton's version leads to a final battle sequence involving murky card/chess piece soldiers fighting on a chess (?) board with what looks about 1000 squares or so. The coherent organization of each game, so important to structure of the books, is lost in the process, so you just get a fun bunch of nonsensical characters romping around in a world without any rules or laws. Burton's Alice is only vaguely faithful to the book when she first arrives in "Underland" and hunts for a door to escape. After that, all of the characters from both books are thrown together indiscriminately.
4) It turns out that Burton's Alice is actually the sequel to the original as Alice struggles to remember her former visit. This explains the air of weary sequelitis hanging over the movie.
5) In Carroll's version, Alice has an edge to her, proclaiming the tea-party "the stupidest" one "I ever was in all my life." When a footman who looks like a Fish says "I shall sit here, on and off, for days and days," Alice decides "there's no use talking to him. He's perfectly idiotic." Faced with a bottle that says "DRINK ME," she finds that "if you drink much from a bottle marked `poison,' it is almost certain to disagree with you, sooner or later." Given Carroll's interest in the Darwinian struggle for survival, Alice frequently faces the possibility of animals devouring each other, the possibility of disappearing altogether when she shrinks, and a multitude of rude creatures threatening her in various ways, but she's equal to every occasion. 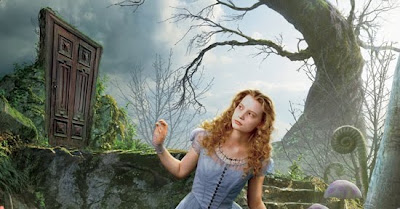 6) In Burton's version, the 19 year old Alice gradually moves from passive acquiescence to Vorpel-sword-wielding warrior, but her transformation struck me as rigged and comparatively facile. Her victory is prophesied from the beginning, and I never noticed the bite of the original Alice in her dialogue written by Linda Woolverton. Burton's Alice does take upon herself to go save the Mad Hatter from imprisonment in the Queen of Heart's castle, so that's something. Mia Wasikowska's bemused Alice also hesitates for awhile when faced with the final battle with the Jabberwocky, but it never seemed that much of a challenge with a magic sword helping out. In comparison to the original Alice's spunk, this new one gets empowered by helpers (the Bandersnatch, the White Queen, etc.) and plot devices.
7) Was Anne Hathaway's arm-waving, ditsy, anti-violent Glenda Good Witch of the North White Queen meant to be an ironic variation on her goody goody public image?
8) And what of the Cheshire Cat? He becomes, along with the Dormouse and the White Rabbit, another cute Disney sidekick.
9) In Carroll's version, the Hatter appears briefly and memorably at the end of the tea party table in a scene that meditates on the nonsensical nature of time and repetitive social rituals. He is mad, but he has his moments, exposing Alice's hypocrisy by saying "Who's making personal remarks now?" When Alice says "I don't think," the Hatter cuts her off with "Then you shouldn't talk." Alice stomps off in a sulk, and we only see the Hatter in brief vignettes later such as the trial scene when he takes a bite from his tea cup in his nervousness. 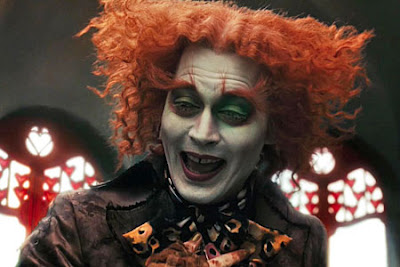 10) In Burton's version, as played by Johnny Depp, the Hatter dominates the movie to the point where he becomes a sentimental bore, looking at Alice with sad freak eyes, and wishing that she wouldn't leave Underland in a way that reminded me the Scarecrow's mooning around Dorothy toward the end of The Wizard of Oz. By the end of Burton's Alice, all that remains of the Hatter's madness is his crazy red and pink makeup clashing with his light green contact lenses.
11) With the big release Alice in Wonderland, all of the wit, madness, and menace of Carroll's two classics get ground into the usual bland, safe, predigested Disney pap. No amount of digital green-screened 3-D technology and inventive art direction can make up for that.
Links:
Helena Bonham Carter at home with Tim
Cinematic versions of Alice
More cinematic versions of Alice
Tim Burton's secret formula
The early years of Tim Burton
Labels: Alice in Wonderland

Jake said…
Yeah, this was a massive disappointment. And it wasn't even a disappointment in the sense that I expected anything from it. I went in expecting nothing, got a very interesting vision of Alice as a strong female presence (yes, she's passive in terms of the plot for much of the movie, but she always asserts herself and flat out refuses to follow the prophecy everyone tells her about because she must do what she feels is right). Then it all just fell apart. Wonderland was dull. The Red Queen started great then deteriorated. Burton gives us just about the most feminist character to ever grace a Disney film, then he undercuts that for the sake of plot convenience and adherence to the old adventure tale structures of useless protagonists becoming heroes only in the end. Of course, by the time she left (and did you get the vibe from the end that she was going to basically help ruin China by opening it to British trade? What the hell is up with that?), she'd become a hero that Wonderland didn't deserve.
March 7, 2010 at 1:02 PM

AR said…
I'm not sure I'm going to see Burton's film just yet. I have far too many reservations and am generally too attached to the books.

Anyway, to be utterly pedantic, Alice is 7 in the books, not 10.

And I hate how writers keep insisting on grafting the 2 books together without recognizing the differences in structure, tone, and theme. The chess game in Looking Glass is incredibly integral to the structure, but few films ever seen to delve into that.
Fusing the Red Queen with the Queen of Hearts is just...UGH.
March 7, 2010 at 1:13 PM

The Film Doctor said…
Thanks, Jake,

I fully agree with your point about
"useless protagonists becoming heroes only in the end." Did you notice that the last (spoiler alert) shot of Alice looking nobly forth from the ship alluded to the famous last shot of Greta Garbo's Queen Christina? Talk about not living up to the allusion:

Richard Bellamy said…
Jake - When Alice points at China, I said to myself, "Right! To open China to imperialism by eleven different nations."

FilmDr. - Your #11 says it all. Well said about in regards to the "wit, madness, and menace" of the book. And, yes, it was reduced to something bland and safe.

The teens in my Drama Club are big Burton/Depp fans but they were mostly disappointed by this film. One student in particular was sorely disappointed, and she said she had waited for this movie for two years.
March 8, 2010 at 7:09 PM

I'm still surprised by how little feel Burton or Woolverton has for Carroll's prose. Nonsense fiction can explore existential absurdity, the paradoxes of time, questions of identity, and game logic (among other things), but this Alice reduces all of that to the fun of seeing animals talk or human faces distort in a colorfully quirky world. I often like Burton's work (such as his Sweeney Todd), so I wonder how much Disney is at fault.
March 9, 2010 at 9:20 AM

Sam Juliano said…
All excellent points for sure Film Dr., but I do NOT agree with "Jake" that this is any kind of a "massive disappointment", which for me is a statement of massive overkill. It gets maybe 3 to 3 1/2 of 5 on the strength of some (nonetheless) ravishing visuals, a partial feel for the material (yeah who could really manage to capture Carroll's prose on screen to be honest?) and another engaging score by Danny Elfman. It's a step down from his last work SWEENEY TODD, but it's intermittantly a fun film, as my five kids ages 13,12, 10, 8 and 7 testified upon leaving our local multiplex.

The Film Doctor said…
Thanks, Sam, for your thoughts.

I was disappointed in Alice in proportion to my appreciation of the original two books. I have taught the them multiple times, finding correspondences in Modernist literature (especially Kafka), Einstein's theories of relativity, and Darwinian evolution. Carroll's work holds up well for both adults and children, but Disney tends to just cater to the kids.

Sam Juliano said…
"Thanks, "Just." That version struck me as kind of dull. I prefer the more vicious 1988 version of Alice by Jan Stankmajer."

It's always good when we agree. Thanks again for your generous shout-outs to my work on Wonders in the Dark.

I agree. After Avatar, Alice's 3D effects seemed incidental and old-fashioned, using stuff thrown toward the viewer for effect.
March 24, 2010 at 3:37 PM

Alice said…
I have to disagree. At first I was a little worried due to all the bad reviews and the fact the story had changed, but I really think Burton made it work. As long as you are not expecting to see the classic story retold word for word, I think it is fantastic.

Also, there is not enough time in a filmt o fit everything in, or to distinguish between the different books; I think it was much better that they didn't try to do this, as it would have over-complicated the plot line, and just confused people. Also, seeing as it was a whole different story, it wasn't necessary to do this as it is assumed to be after the events in both the books.

Basically, I think it really worked, as long as you are not too precious about the original story.

We can agree to disagree. Certainly, in terms of worldwide reception (the film earning over a billion dollars), Burton's Alice has done well. Fantasy can get very random very fast, and I prefer the core of logic that Carroll often brought to his original scenes.
June 12, 2010 at 9:32 AM