The opposite of Up in the Air: field notes on a 68 hour trip to Dublin 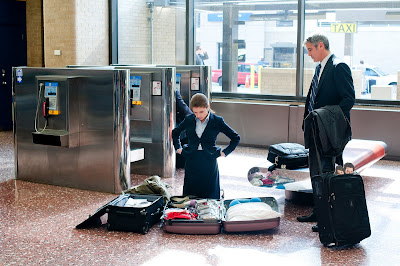 Richard Bellamy said…
What a nightmare! Everything went wrong! But you remained philosophical and persisted. I guess you had to - in order to retrieve your luggage in Dublin!

"I am here, and whether or not I arrive there ultimately becomes immaterial." I like that.

The Film Doctor said…
Thanks, Hokahey. Yes, the Dublin trip went much better. I enjoyed talking at length with James Quinn about Joyce at the James Joyce Center (in comparison to him, I felt very slow and southern). The number one tourist stop, the Guinness plant, reminded me of a Nike factory store.
March 27, 2010 at 8:30 AM

Richard Bellamy said…
Glad things went well. I admire you for being Joyce scholar. I have read half of Ulysses and hope to continue. Are you a fan?
March 27, 2010 at 9:30 AM

The Film Doctor said…
Yes, and Dublin proved so, too. I've heard that the Irish used to consider Joyce "mad," but now his name graces two bridges on the Liffey, the Center, and who knows how many statues, pubs, etc. There are even Joyce quotes inscribed on the glass walls of the skybar of the Guinness tour, all kind of ironic for someone who felt obliged to get away from Dublin for much of his life in order to write about it. I asked Quinn what Joyce would have thought of all of this belated attention, and he said Joyce would have loved it.

Anyway, I mostly wrote the field notes in an attempt to convey the impression that there's something deeply deranged about air flight these days. A chemist friend of mine says that all indications are that peak oil has hit, and therefore air flight will become prohibitively expensive once fuel prices continue to rise. In the meantime, airlines continue to cut costs where they can, and that, combined with the paranoia of heightened security, can create a nightmare experience. The mobbed JFK airport at night, after the storm and littered with luggage, reminded me of the lowest point of Dante's Inferno.
March 28, 2010 at 7:38 AM