Daniel, Kristi, Ali, and Hunter face the demon: 7 notes on the banalities of Paranormal Activity 2 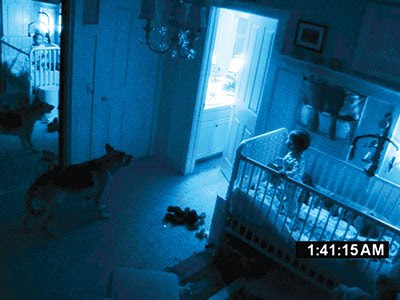 I admire Oren Peli's do-it-yourself indie coup when his $11,000 home-made movie Paranormal Activity (2007) made over a 100 million dollars. When I reluctantly went to see the deliberately crude but more professionally made Paramount sequel last week (with Peli as a producer), I wasn't expecting much, but I confess I liked its banalities: its repetitive lulling rhythms, its improvised dialogue, its indefatigable robotic pool cleaner that steals every scene it appears in, and its REC-influenced progression to eerie green night vision footage. I'll let a quote from Robert Abele's LA Times review of the movie set up the basic situation, and then follow with some notes:
"First off, there are more characters, in this case a Carlsbad, Calif., family composed of a dad (Brian Boland), second wife (Sprague Grayden), perky teen daughter from the first marriage, boy toddler, Latina nanny who senses bad spirits and German shepherd (whose alertness to things unseen is one of the movie's new goose-bump-raising assets).
There are also more visual perspectives, from the hand-held camcorder that various family members use to document initially happy — then increasingly worrisome — household events, to the six security cameras installed in the wake of an unexplainable burglary. Katie (Katie Featherston) is back, too, as the sister of this movie's young mom."
1) Paranormal Activity 2 suits my increasing sense of dread. How in the midst of plenty--a nice house, a thriving family, and much technological advancement-- there's something very wrong, and I couldn't help seeing the demon as a metaphor for:
a) the evils of surveillance (we observe a family electronically observe themselves),
b) the clutter of consumerism (the suffocating rat's nest in the basement),
c) cookie-cutter identity-annihilating suburban sprawl,
d) the banalities of reality TV
e) the evil oppression of having to watch home videos with babies (one reason why I hate Facebook) 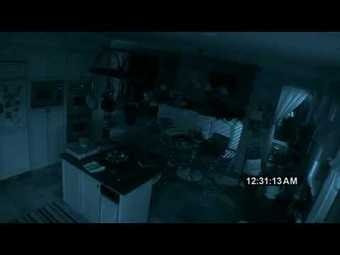 2) PA2 celebrates the long shot of various rooms, a break in the tyranny of closeups, where (much as in the first Paranormal Activity) the audience looks all around for the next demonic irregularity--the door opening on its own when the mother Kristi looks out the window, the German Shepherd barking at the ostensibly empty bathroom, the baby Hunter being dragged across the crib in his sleep. The film suits our hunter's instinct to look for the movement of prey (although the prey in this case is the hunter or the trickster frequently messing with the family). I liked the playfulness of the demon twirling the child's mobile over the crib when the mom isn't looking, turning off and on the night light, and making the pool cleaner slide out of the water. The sheer ordinariness of the household invites destruction.
3) I liked the film's lack of an authoritarian point of view. The teenaged daughter Ali hunts around on various websites until she hits upon a theory that hints at the demon's desire for the first-born male child as part of a grandmother's Faustian deal. But this interpretation is just tossed in for those who desire some explanation. 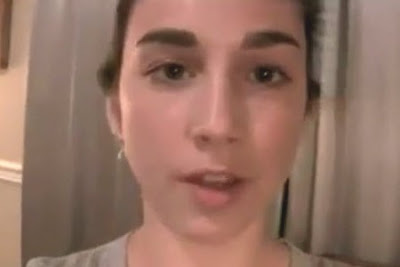 4) The film plays with our insecurities--Ali gets locked outside and no one's inside to watch the baby. Things increasingly go wrong, yet the family mostly wants to avoid what it knows in its desire to continue to enjoy its creature comforts.
5) In its The Shining-like way, PA2 ultimately favors the child. It's the purblind adults who are in real trouble.
6) I found more horror in the father Daniel's fuddy duddy little trimmed hipster beard, his flipflops, his shorts, and his huge flat screen TV. (spoiler alert) Typically, he has to rush off to work when his wife Kristi (Sprague Grayden) is possessed. She stares blankly from a chair, a large bite mark on her leg from when she got dragged down into the basement.
7) As I watched the no-name actors emote for the camera, eat bacon in the kitchen, or romp around in the pool, I wondered how much PA2 reflects its audience. The teenage daughter Ali (Molly Ephraim) likes to videotape everything because it makes her feel more real, but the true horror lies in watching stand-ins for ourselves immobilized, specimens in a luxury terrarium, slumped on a couch, and watching TV. The demon ultimately seems superfluous.
Labels: Paranormal Activity 2

Richard Bellamy said…
This is hilarious. #6 is superb. I found more horror in the father Daniel's fuddy duddy little trimmed hipster beard, his flipflops, his shorts, and his huge flat screen TV. I totally agree. And he's so easy to off - just get him watching TV and snap his neck. Yes, I was horrified by his frightening family. My favorite characters - in order:

After their house is trashed, the letters on Hunter's door read "Hunte." I was wondering if that's an anagram for something spooky or meaningful.

And another thing - after you crawl after your kid in the basement and wrestle with a demon, you don't stay in the house the next day! You go to Mexico.
October 28, 2010 at 8:22 PM

My favorite character is the pool vac by a mile.

There was something comforting and soothing about the repetition of so many bland overhead establishing shots. It was like visual muzak at a surveillance convention.

Yes, in both Paranormal Activity and PA2, there's a very good reason to leave the house at a certain point, but the characters never do.

I wasn't as bored, for some reason, but I also wasn't frightened. I did think that the prequel/sequel (simuquel?) return to the previous storyline was clever.
October 29, 2010 at 6:54 AM