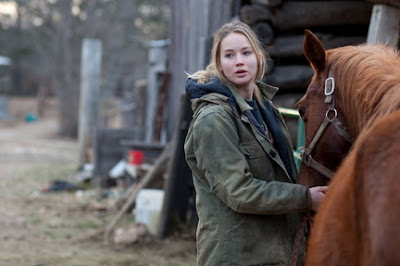 Few films take such meager grungy materials to form such a compelling storyline as director Debra Granik's Winter's Bone, adapted from a novel by Daniel Woodrell. Without much to live on except the generosity of her neighbors and what she can shoot, a 17 year old girl, Ree Dolly (Jennifer Lawrence) is forced to take care of her severely depressed mother and her younger brother and sister on a small farm in the Missouri Ozarks in winter. Her father has just signed over the farm to pay part of his bond, and now that he's skipping bail, Ree and her family face eviction where they would have to live "out in a field like dogs" as she phrases it. So, without a truck, she has to walk out to find her father, or her father's bones if he's dead, in order to maintain her hardscrabble existence. She teaches the kids some survival skills by showing them how to shoot squirrel. When her brother Sonny balks at pulling the guts out of a squirrel's corpse, Ree tells him that he doesn't have the luxury to be frightened of that. As he pulls it out, he asks, "Do we have to eat these parts?" Ree replies, "Not yet." When he later asks her if they can beg for food from the neighbors, she grabs him and says "Never ask for what ought to be offered." 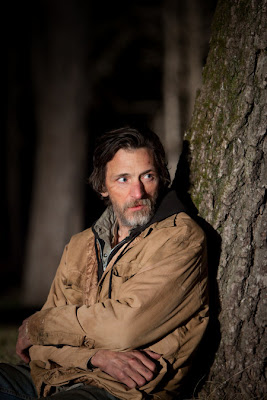 The ever-present sense that Ree can sink lower in the circles of the meth-lab hell around her lends the film such force. Widespread methamphetamine addiction has reduced most of the men to bedraggled shifty-eyed Charles Manson-esque freaks. Ree's father's uncle Teardrop (John Hawkes) is in the best position to help her, but instead he grabs her head and threatens to punch her in front of his grim wife, who can only offer Ree a joint for the walk home afterwards. From there, one can see Ree's possible future in the gaunt hardened faces of the women she meets as she tries to track down some answers from increasingly scary meth-dealing men who keep a code of silence. "Talking just causes witnesses," as one wife answers Ree's plea before refusing to let her talk to her husband. Meanwhile, the bond officer tells her that she just has one week left before they evict her from her farm. At one point, Ree's next door neighbor drives her to a burned down shack, and tells her that her father was recently burnt up in the fire. Ree indignantly replies that her father didn't "blow no labs" or produce any "bad batches." He must think her an "idiot" for thinking she wouldn't notice that high weeds inside the house betray the fact that the house burned down the previous year.
As the film moves toward ever more grim noirish scenes, Ree gets beaten up by some harpy-like wives. When a family huddles in a barn and wonders what to do with her, Ree half-humorously replies "Kill me, I guess. Or help me? Has that occurred to anyone?" Twenty year old Jennifer Lawrence holds the screen with her determination. Her character has moments of despair, for instance when she weeps when her mother cannot snap out of her depression long enough to help her, but basically Ree has no choice in what she does, and Lawrence's performance honors that up-against-the-wall ferocity. In the midst of our media-distracted age, Winter's Bone reminds one of the fundamentals of survival, and the stoic resolve that can result from necessity. When her kid brother and sister ask Ree if she will leave them, she replies, "I'd be lost without the weight of you two on my back."
Labels: Winter's Bone

Richard Bellamy said…
This is a superb film, with a superb performance by Lawrence, and a very memorable supporting performance by John Hawkes as Teardrop. He is certainly a grim customer. "I told you to shut up once already ... with my mouth." But he transforms into a noble guardian for Ree and he wins back some of his lost humanity before, as the film seems to suggest, he goes out to kill those responsible for his brother's death (since he's found out who it was), and he'll most likely get killed too.

I had read and loved Woodrell's Woe to Live On, which was the basis of Ang Lee's Civil War movie Ride with the Devil, so I read Winter's Bone and I found that the movie is a lot better than the book. The book spends too much time on needless, "lyrical" description, thus losing the grittiness that pervades the movie strongly.
October 31, 2010 at 1:12 PM

The Film Doctor said…
Now you tell me! I just bought the book and like it just fine so far. It fleshes out aspects of the storyline that can only be hinted at in the movie, such as Jessup's misadventures. John Hawkes' role reminds me of Harry Dean Stanton's role as Kiser Pease in Where the Lilies Bloom (1974). Both characters appear to be unredeemable at first, but gradually gain humanity as each respective film goes on.

I thought it interesting, too, that the only indigenous culture that the characters in Winter's Bone seem able to retain is their bluegrass music.
November 1, 2010 at 9:01 PM

Richard Bellamy said…
Hawkes definitely reminded me of Harry Dean Stanton. I love the stand-off scene between Teardrop and the sheriff. Though whenever I think of Stanton, I think of Red Dawn.

Tell me what you think of the novel when you are done. Interesting that in the novel it's really winter; she spends a lot of time trudging through snow. Guess it's easier to shoot without snow.
November 2, 2010 at 6:06 PM

The Film Doctor said…
Thanks, Hokahey. I've been distracted by needing to read Chopin's The Awakening, but I plan on finishing Winter's Bone soon.
November 7, 2010 at 8:11 PM