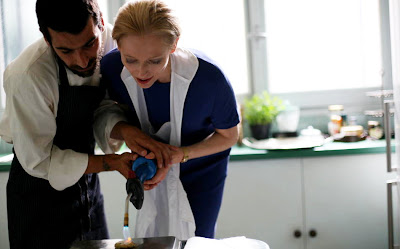 Luca Guadagnino's I Am Love served as a kind of aesthetic cleanser for my week, a film so artfully made, it immediately sparked associations with Vertigo, The Talented Mr. Ripley, A Single Man, The Leopard, L'Avventura, and Big Night. Even as Yorick Le Saux's cinematography moves between edgy and gorgeous, I Am Love keeps shifting and re-shifting its allegiances between art and nature, the rich and the poor, the interior and the exterior world, and the past and the present. In the process, the film never settles on the obvious conclusion. Some notes with spoilers:
1) The title I Am Love, which evokes Rimbaud's "J'est un autre" (I is someone else), at first appears to be a bland affirmation of the power of love, but insofar as society matron Emma Recchi (Tilda Swinton) has to sacrifice everything to become "love," one realizes that the title also hints at the annihilation of her identity.
2) I found it weird how I Am Love shares with Eat, Pray, Love a three word title that ends with "Love" and includes a female midlife crisis intertwined with a rapturous appreciation of Italian cuisine. There, I trust, the resemblance ends. 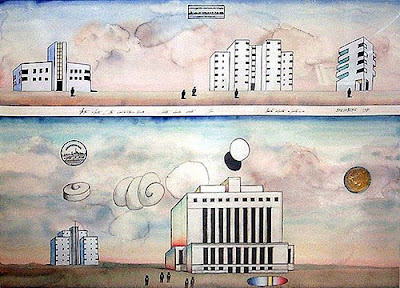 3) I liked the way that Guadagnino kept exploring artistic forms, notably those found in architecture, fashion, the nude, interior decoration, and in high cuisine. The film begins with several shots of large buildings in Milan on a snowy winter day. They reminded me of Saul Steinberg's drawings where larger institutions dwarf humanity. These scenes prepare the viewer for the sense of upper class social control and heirarchy in Recchi family's extravagant dinner party where the elder titan of the Recchi textile industry (Gabriele Ferzetti) bequeaths his power to his son Tancredi (Pippo Delbono) and his grandson Edoardo (Flavio Parenti). During the course of the party, we learn that Edoardo just lost a race to Antonio, a chef (Edoardo Gabbriellini). For some reason, later on that evening, Antonio stops by with a cake he had made for Edoardo. When he first appears out of the snowy night, we see his (class-related?) hesitation before interfering with such a high class affair, and he refuses to accept Edoardo's offer to come inside. When the head house servant turns her back for a moment, Antonio sneaks out. 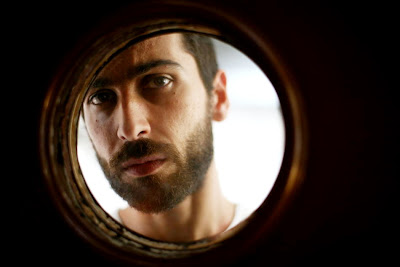 4) A bearded, intense artist, Antonio befriends Edoardo, uses him to obtain permission to open a restaurant, seduces Emma with his cooking, and eventually proves instrumental in provoking Edoardo's death. Does he do all of this out of class resentment, or is he just blithely following his culinary and erotic passions? It is really hard to tell.
5) Meanwhile, another artist, Emma's daughter, Betta (Alba Rohrwacher), who shares Emma's Russian blond coloring, manages to shock the family patriarch by giving him a photograph of a garden when he's expecting one of her drawings. The scene emphasizes how the artists in the family keep restlessly shifting their forms of expression, and even though the Recchi are rich and cultured enough to enjoy art, they are uneasy with its potential for subversive passion. Emma is both an enviably sophisticated woman of leisure and a caged animal in an airless museum. So, when Betta breaks out of her expected role and starts a passionate affair with a woman, Emma finds herself tempted by her daughter's example.

6) I Am Love first shifts to Emma's subjective point of view when she eats some of Antonio's expertly prepared prawns with homegrown vegetables. Suddenly, the lighting rests only on her as the rest of the room dims, a scene reminiscent of Newland Archer and Ellen Olenski's similarly lit early private romantic moment in the theater in Scorsese's The Age of Innocence (1993).
7) When Emma gives into her passion and starts to follow Antonio around San Remo, Guadagnino has her wear the exact same hairdo that Kim Novak wears in Hitchcock's Vertigo. 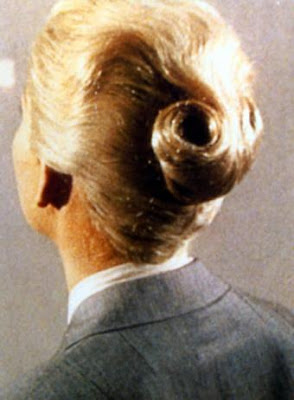 The homage suits the way Emma's fixation on Antonio now takes on obsessive overtones, just as Scottie becomes obsessed with Madeleine, but now the two roles are reversed, with an older woman chasing a younger man. When Antonio threatens to turn around and see her, Emma ducks into a book shop and in her confusion and excitement, looks at an art book. Then, she inadvertently steals the book when she hops out of the store, and bumps into Antonio, who then cheerfully asks her to join him in visiting his garden in the countryside. The theft of the book emphasizes the transgressive side of Emma's interest in Antonio and his cooking. The interest in art now leads her out into nature, where she will sleep with Antonio al fresco. For the rest of the film, Emma's desire to break the confines of her high society position will lead her to increasingly run around outside barefoot as the rest of the Recchi clan looks on, bewildered.
8) And yet, when one would expect Guadagnino to affirm this new pastoral love, he also uses its imagery to plant the seeds (so to speak) of Edoardo's destruction. Whenever Emma is around water, be it with her daughter by the pool, or with Antonio when they make love near a mountain stream, or even by some bottled water in the back of Antonio's restaurant, all of these scenes prepare the viewer for Edoardo's death late in the film when he falls and hits his head on a stone parapet before falling into a pool. All of this occurs directly after he learns of his mother's affair with his friend Antonio. 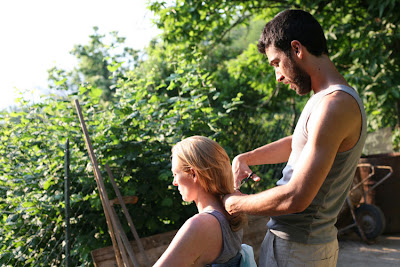 9) Just when one expects the film to go all pastoral and sweet, it turns lethal. Other ambivalent images of nature include individual shots of insects on flowers in the lovemaking scene and a later shot of Antonio and Emma reclining murkily inside a dark cave. On one level, she has shaken off her formal shoes, burst the confines of her swank Milan existence, and followed her subversive heart, but now what's she doing being enveloped by the earth? With her son dead, her family estranged, and Antonio leading her further and further into the dark, where's the triumph in her "being" love now? Aside from beautifully depicting these multiple tensions, I Am Love refuses to say.
Related link:
Rene Rodriguez discusses I Am Love's literary and cinematic influences
Labels: I Am Love

Sam Juliano said…
"Even as Yorick Le Saux's cinematography moves between edgy and gorgeous, I Am Love keeps shifting and re-shifting its allegiances between art and nature, the rich and the poor, the interior and the exterior world, and the past and the present. In the process, the film never settles on the obvious conclusion."

I love this film too (an intended pun of course) but I am floored by this magnificent essay, one of the best you've ever authored, and one to stand with anyone in the blogosphere on their best day. Your probing examination -Point #3 on artistic forms is brilliance incarnate! This is a breathtaking assessment. Congratulations.

The Film Doctor said…
Much thanks, Sam. I still find myself brooding on other details of the film--a trip through the countryside that reminds me of the last scene of The Unbearable Lightness of Being, a church scene reminiscent of L'Avventura. I find it interesting that Guadagnino admits to a heavy influence from Flaubert's Madame Bovary. The image of the patriarch passing on also carries parallels to Assayas' Summer Hours.
October 18, 2010 at 3:34 PM

Sam Juliano said…
All superb comparisons, and I completely concur on Flaubert and Assayas, Film Dr.
October 19, 2010 at 7:39 AM

rtm said…
I posted the trailer for this a while ago... sooo beautiful! Aesthetic cleanser sounds fitting, I mean, the setting alone makes you experience Italy vicariously through the character. Glad it doesn't have much of a resemblance to Eat, Pray, Love... I'm not as keen on watching that one. Looking forward to seeing this when it's out on dvd.
October 19, 2010 at 11:55 AM

The Film Doctor said…
Thanks, rtm,

I watched I Am Love on DVD, and then the gang I was with immediately had intense discussion about the intricacies of the movie. It's the kind of film that one can watch just for the composition of each shot. The story is like a bonus.
October 22, 2010 at 10:29 AM

Jason Bellamy said…
I'd wanted to write about this film when I first saw it a few months ago, but I didn't find the time. Now I'm glad I didn't, as I missed most of the direct references, including the one from Vertigo, which is so obvious now.

I think one reason I couldn't find the time to write about the movie was that I couldn't find enough time and space to figure out what I felt about it. The film confused me, mostly in a good way.

In that Rodriguez piece you link to, Swinton says, "We wanted that feeling of really getting lost in the world of the film you're watching ..." I Am Love most definitely offers that. And I found much of it heartbreaking and I enjoyed the disjointedness of it. But at the same time, something felt just a little off to me -- something I can't put my finger on -- something that doesn't ruin the film by any stretch but that keeps me from falling for it completely.

Which is the long way around to saying that I need to stick this in my Netflix queue to see it again. I'll either fall hard this time or figure out what's holding me back.

As a related aside: I saw I Am Love when it had dropped down to just one weekend afternoon time at Washington, DC's art theater. It was on its way out. As a result, the small theater was very full. The following week it was back to having four times. And it kept those four times for about three or four more weeks. I mention all of this as a tribute to the film itself, which obviously stayed around thanks to the word-of-mouth recommendations of people who saw it.

The Film Doctor said…
Thanks for your thoughts, Jason,

The more I think about I Am Love, the more I like it for its resemblance to Madame Bovary, especially in the way Guadagnino's cold treatment of Emma's love matches Flaubert's mixed emotions about Emma Bovary's philanderings. Yesterday, I went to see a local play production, a civic effort in a small city in SC that deliberately caters to an older more sentimental crowd. All of their plays tend to be very sweet, and nice, and full of warm sentiment, and if the audience goes for that, then that's fine. But I prefer colder works of art that like to keep its dichotomies in play, and ultimately doesn't have much mercy for its characters. At the end of I Am Love Emma appears to triumph, and everything about that last scene--the church, the rain, her bare feet, the way she grabs her stuff back in the house, her daughter's gesture of approval, and the open glass door in which she has already escaped--all of those elements sort of reinforce her victory, and they tie together in a very L'Avventura like way--a visual vocabulary of mise-en-scene that reaches a climax, but she doesn't win, or it appears she doesn't because the cave scene that follows. Guadagnino never really tips his hand either way, and its that sense of poise between oppositions, that sense that Guadagnino and Swinton will not compromise their vision for the audience, that makes the movie so powerful to me.
October 23, 2010 at 9:19 AM