David Foster Wallace, The Pale King, and the information society 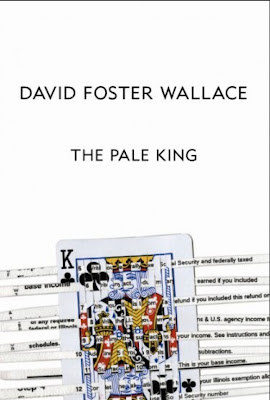 An excerpt from David Foster Wallace's The Pale King:
"For me, at least in retrospect, the really interesting question is why dullness proves to be such a powerful impediment to attention. Why we recoil from the dull. Maybe it's because dullness is intrinsically painful; maybe that's where phrases like `deadly dull' or `excruciatingly dull' come from. But there might be more to it. Maybe dullness is associated with psychic pain because something that's dull or opaque fails to provide enough stimulation to distract people from some other, deeper type of pain that is always there, if only in an ambient low-level way, and most of us spend nearly all our time and energy trying to distract ourselves from feeling, or at least from feeling directly or with our full attention. Admittedly, the whole thing's pretty confusing, and hard to talk about abstractly . . . but surely something must lie behind not just Muzak in dull or tedious places anymore but now actual TV in waiting rooms, supermarket checkouts, airports' gates, SUV's backseats. Walkmen, iPods. BlackBerries, cell phones that attach to your head. This terror of silence with nothing diverting to do. I can't think anyone really believes that today's so-called `information society' is just about information. Everyone knows it's about something else, way down.
The memoir-relevant point here is that I learned, in my time with the Service, something about dullness, information, and irrelevant complexity. About negotiating boredom as one would a terrain, its levels and forests and endless wastes. Learned about it extensively, exquisitely, in my interrupted year. And now ever since that time have noticed, at work and in recreation and time with friends and even the intimacies of family life, that living people do not speak much of the dull. Or those parts of life that are and must be dull. Why this silence? Maybe it's because the subject is, in and of itself, dull . . . only then we're again right back where we started, which is tedious and irksome. There may, though, I opine, be more to it . . . as in vastly more, right before us all, hidden by virtue of its size."
Some related links:
---Laura Miller's "The Pale King: David Foster Wallace's Last Battle"
---James Campbell's "A Cure for Head-Exploding Brilliance"
---an interview with Karen Green
---David Pietsch's "In Search of David Foster Wallace's Pale King)
---Emily Cooke's "The Burden of Meaningfulness: David Foster Wallace's The Pale King)
---Tom McCarthy's "David Foster Wallace: The Last Audit"
---Jonathan Raban's "Divine Drudgery"
Labels: David Foster Wallace The Pale King

Richard Bellamy said…
FilmDr. - Have you read this book? Are you planning to? I read a TIME article about it and I find it compelling. I'm going to present passages from it in my A.P. English class. I find it interesting that he says, "Enduring tedium over real time in a confined space is what real courage is." I identify with this. Similarly, I think that we only come to terms with ourselves and our world through isolation - and that's something young people these days would not readily choose to do. In the Peace Corps I spent three years in the Sahara desert - a lot of isolation, loneliness, and tedium. But you learn something about yourself - and you definitely learn that reading and writing are essential to survive something like that. I would like to read Wallace's book.
April 11, 2011 at 2:46 PM

I'm busy devouring this book since I found I could obtain a copy at a Barnes & Noble a few days before its publication date. The passage I quoted struck me as the best one thus far that strives to summarize the major theme of the novel. Instead of writing a novel to entertain us, Wallace sought to examine our sickly relationship with entertainment. In Infinite Jest, he characterized it in terms of an addiction that left one enthralled (urinating on the floor, etc.) until one died. In my favorite nonfiction piece "A Supposedly Fun Thing I'll Never Do Again," Wallace explored the ghastly, nightmarish nature of a cruise where the people's attempts to be perpetually happy becomes the worst kind of self-deluding despair. Now, with The Pale King, Wallace takes the opposite tack of depicting an boring Kafkaesque bureaucracy of the IRS to once again reflect upon our dependence on amusement (among other things--death and taxes?). Even with its uneven quality that reminds me of T.S. Eliot's line in "The Waste Land"--"These are the fragments I have shored against my ruins"---The Pale King strikes me as easily the best novel of the year. I've not been reading it so much as vacuuming it up (after all, should not film blogs also explore our at-times deranged nature of our relationship with popular culture? What does it mean that we feel compelled to write about the very things that perpetually distract us? Wallace shows one how to use writing as a way to become semi-self-aware of contemporary enthrallment to gadgets and amusement at any price). I'll write a larger post about the novel later in the spring.
April 12, 2011 at 7:16 AM

Richard Bellamy said…
Thanks for this post, FilmDr. The TIME article made me want to read this book, and now your post ensures that I will. The disjointed nature of the book is intriguing to me. Also, the Kafkaesque nature of the story as well. Sometimes books like this are hard to get through, but sometimes you just "vacuum" them up, as you say. I felt that way about Pynchon's Against the Day which was way far out but it always kept me reading.
April 12, 2011 at 9:05 AM

The Film Doctor said…
Now that I'm further in the novel, I find it odd how Wallace makes the process of joining the IRS compelling. Ideologically, it sounds like one character is regressing from a stoner 1970s figure to a much more straitlaced 1950s type with short hair and conservative suits. The Jesuit-trained professor that converts the narrator says: "here is a truth: Enduring tedium over real time in a confined space is what real courage is." Is this some metaphor for the writing process? It leaves me wondering where Wallace stands in regards to all of this sacrificing one's fun for processing tax returns. What is the redemptive power of boredom?
April 20, 2011 at 7:57 AM