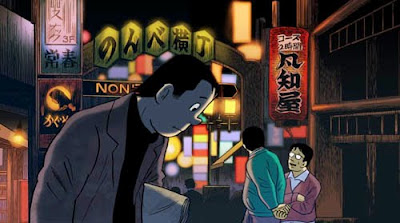 ---a scene from Woody Allen's Stardust Memories (thanks to @mattzollerseitz)
---Girish quotes David Kehr as Sheila quotes Sidney Lumet's Making Movies:
"[Paul Newman] is an honorable man. He is also a very private man. We had worked together in television in the early fifties and done a brief scene together in a Martin Luther King documentary, so when we got together on The Verdict, we were immediately comfortable with each other. At the end of two weeks of rehearsal, I had a run-through of the script … There were no major problems. In fact, it seemed quite good. But somehow it seemed rather flat. When we broke for the day I asked Paul to stay a moment. I told him that while things looked promising, we really hadn’t hit the emotional level we both knew was there in David Mamet’s screenplay. I said that his characterization was fine but hadn’t yet evolved into a living, breathing person. Was there a problem? Paul said that he didn’t have the lines memorized yet and that when he did, it would all flow better. I told him I didn’t think it was the lines. I said that there was a certain aspect of Frank Galvin’s character that was missing so far. I told him that I wouldn’t invade his privacy, but only he could choose whether or not to reveal that part of the character and therefore that aspect of himself. I couldn’t help him with the decision.
We lived near each other and rode home together. The ride that evening was silent. Paul was thinking. On Monday, Paul came in to rehearsal and sparks flew. He was superb. His character and the picture took on life.I know that decision to reveal the part of himself that the character required was painful for him. But he’s a dedicated actor as well as a dedicated man. And … yes, Paul is a shy man. And a wonderful actor. And race car driver. And gorgeous."
---Catherine Grant of @filmstudiesff created AUDIOVISUALCY, an online forum for videographic film studies, which includes her tribute to Elizabeth Taylor in Jane Eyre (1944) 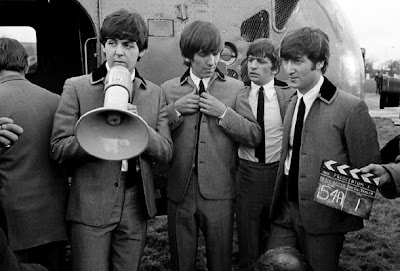 ---A. O. Scott considers The Passion of Joan of Arc as Richard Brody appreciates A Hard Day's Night
---how Mike Leigh makes a film
---Ed Howard of @onlythecinema reviews Thom Anderson's Los Angeles Plays Itself:
"One of Andersen's central ideas here is the gap between reality and screen representation. He identifies many ways in which Los Angeles on screen differs from Los Angeles as an actual city, tracing the city's cinematic history from its early days, when in its anonymity it often stood in for Chicago or New York or any number of other cities, to the much more specific visions of later years. There's Los Angeles as a site of disaster movie destruction, the home town that moviemakers seem to take special delight in tearing apart. There's Los Angeles as a city of cops, and Andersen's deconstruction of Dragnet as a fascist version of the precise, minimalist aesthetics of Ozu and Bresson is especially potent. And also very funny. Andersen has a sharp, biting sense of humor, and he mingles seemingly genuine admiration for Dragnet's robotic technical precision with contempt for its exaltation of an "ideal" cop who tramples all over the pathetic, kooky, corrupt people he encounters in the course of his job. It's similarly hilarious when Andersen uses a shot of Charles Bronson literally exploding a bad guy as the punchline to a sequence in which Andersen laments the movie convention of staging chase scenes that leap from locale to locale with little regard for physical reality: "silly geography makes silly movies," the voiceover says, and with Bronson as evidence it's hard to argue.
That's a throwaway gag, though, and Andersen's critical commentary ultimately has much more serious aims. One of his most interesting insights is the idea that Los Angeles, as presented in the movies, is a city of perpetual nostalgia for a time that never was. "At any time in its history, Los Angeles was always a better place a long time ago than in the present," the narration says, speaking especially about movies like Chinatown, Blade Runner and L.A. Confidential. It's Andersen's contention that movies about Los Angeles are often period movies, rarely movies about the present, at least not in the modern era. He takes as one telling example the rather startling absence of the Watts riots from most films; it was only long after the riots had faded a bit that movies could portray the events, Andersen says, and then only with a comforting and ironic use of banal 60s oldies tunes to place the events safely and securely in the past. There seems to be widespread discomfort in really engaging with Los Angeles' present, even in the futuristic Blade Runner, which presents a dystopian Los Angeles that is actually, perversely, rather attractive, a glossily beautiful if frightening vision of the future that Andersen contrasts against the much plainer, uglier possibilities that are likely to shape the real Los Angeles of the future."
---Shaun of the Dead in 60 seconds
---Jake of @notjustmovies reviews Scorsese's After Hours
---Steven Soderbergh's media diet

---Lars Von Trier's trailer for Melancholia
---Jaime appreciates the work of director Paul W. S. Anderson
---Ben Sachs considers Blue Collar
---Pauline Kael and Woody Allen (not to mention Jean-Luc Godard)
---the 101 greatest screenplays
---our new era of water scarcity:
"We are in the middle of a water crisis already, in the United States and around the world. The experts realize it (the Weather Channel already has a dedicated burning-orange logo for its drought reports), but even in areas with serious water problems, most people don’t seem to understand. We are entering a new era of water scarcity -- not just in traditionally dry or hard-pressed places like the U.S. Southwest and the Middle East, but in places we think of as water-wealthy, like Atlanta and Melbourne.The world has 6.9 billion people. At least 1.1 billion of us don’t have access to clean, safe drinking water -- that’s one out of six people in the world. Another 1.8 billion people don’t have access to water in their homes or yard, but do have access within a kilometer. So at least 40 percent of the world either doesn’t have good access to water, or has to walk to get it.In the next fifteen years, by 2025, the world will add 1.2 billion people. By 2050, we will add 2.4 billion people. So between now and forty years from now, more new people will join the total population than were alive worldwide in 1900. They will be thirsty.And then there is the unpredictability of climate change. Water availability is intensely weather- and climate-dependent, in both the developed world and the developing world. At one point in 2008, during the years-long drought across the southeastern United States, 80 percent of the residents of North Carolina were living under water-use restrictions.The Las Vegas area has 2 million residents and 36 million visitors a year, and its water source in January 2011 was lower than it had been in any January going back to 1965. At that time, Las Vegas had about 200,000 residents; today, on a typical day, there are twice that many tourists in town. 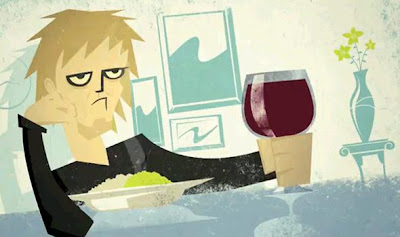 Beyond population and climate change, the other huge and growing pressure on water supplies is economic development. China and India are modernizing at a whirling pace, and together those two countries account for one out of three people in the world. Economic development requires rivers full of water, not just because people want more secure and more abundant water as their incomes improve but because modern factories and businesses use such huge volumes of water."
---Tatsumi trailer
---towards a talking newspaper
---Invisible Cities
---lastly, Storm the animated movie
Labels: Notable film and media links