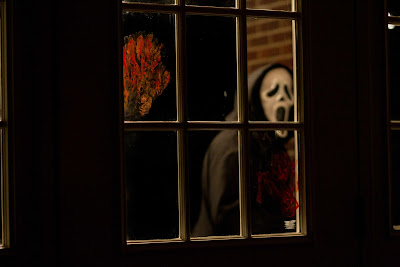 1) Scream 4 mostly consists of self-referential stabbing scenes with an emphasis on the stomach. Writer Kevin Williamson finds numerous occasions to flatter the film-savvy viewer with witty dialogue referencing his or her knowledge of the slasher genre, but the irony tends to thin out any prospect of anything more. Early on, one teenage girl criticizes torture porn for its lack of character development in a scene where no one has an opportunity to develop any character before being killed.
2) So the film walks a knife-edge (so to speak) of providing scares and gore as it glibly comments on its horror devices, our cultural enthrallment with internet media, and the hall of mirrors already established within the three former films of the franchise (in Scream 4, the Stab franchise has already reached number 7, and the Woodsboro high school students congregate for a "Stabathon" party where they drunkenly watch every one). The question is--at what point can a movie become too meta-meta-postmodern and reflexive, leaving one longing for some solidity, some real storyline going on right now? 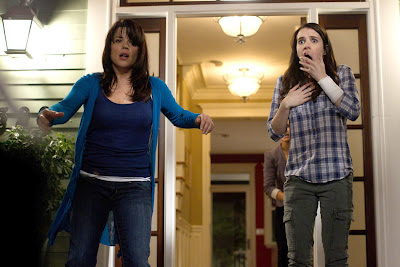 3) For that, one can turn to the three leads who remain from the original Scream (1996): the still relatively youthful-looking Neve Campbell (who plays Sidney Prescott, author of Out from Darkness which celebrates her survival from many previous murder attempts), Courteney Cox (who plays Gale, a former journalist still living in Woodsboro, married to Dewey, and frustrated because she can't write), and David Arquette (who plays Dewey, now the sheriff). All three middle-aged actors look a bit awkward in their attempts to lend a bit of adult gravitas to a genre that favors disposable teenagers. David Arquette and Courteney Cox reportedly fell in love during the making of the first film, and now have separated in the midst of producing Scream 4. I was also intrigued with the way Williamson chose to have two of these repeat characters very much concerned with writing, as if he wants them to share in the creative process. 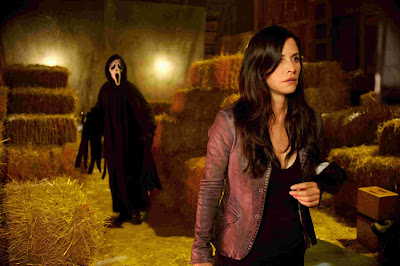 4) Otherwise, Williamson sticks to his formula: people talk, text, and die on their cell phones, the black-caped villain Ghostface stabs, and characters run through expensive suburban homes as others, usually of the press, respond with inappropriate glee. Two policemen discuss how cops involved in surveillance often get killed in horror films. One almost immediately gets stabbed in the face, stumbles out of his car, and says "F--- Bruce Willis," before keeling over dead. Film geeks at the local high school worship Sidney and itemize various likely third act plot shifts to come. As Dewey tries to keep a lid on public knowledge of the murders, Gale tells him that "it is all over the Internet." At one point, characters hiply watch Shaun of the Dead and laugh as various zombies get impaled or shot. As the scene would cut to Dewey dashing across town in his sheriff's car to save the next menaced teenager, I found myself considering leaving the theater. 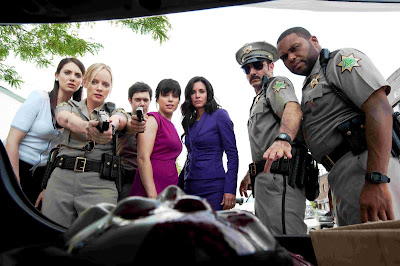 5) Still, I liked the last few concluding scenes where the real villain is unmasked and explains his or her motivation. It turns out (indirect spoiler alert) that he or she is simply acknowledging everybody's deranged nihilistic desire for Internet attention, and what better way is there than to digitally tape one's murders and distribute them on the web? As the murderer points out, "Sick is the new sane." Mourning the dead has become so passe. Why not embrace and take glory in everybody's deviant pleasure in mediated slaughter? Given that we are watching the fourth film that capitalizes on just that, why not, indeed?
Labels: Scream 4

Anonymous said…
I agree with you on most of your points, but I just wanted to mention that David Arquette's character is named Dewey (not Dale).
April 21, 2011 at 2:37 AM