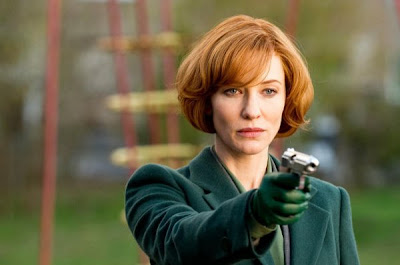 ---Toby Jackman's Today Only and the teaser for Le Chat du Rabbin
---an intense analysis of Kubrick's The Shining:
"The Shining can be seen as a preamble to a form of new, post-Western visual guidance: one day these 'simple' pre-tools (imagine disorientation a form of tool) may be magnified inside blockbuster films and videogames that access the brain much more directly. Kubrick, a thinker's magician, is trying to teach the audience without any of us becoming aware of lesson and method. More specifically: it may even be a primer for an entirely next-stage visual language available within the decade (on one level the film is a careful satire, and in darker ways a refutation of how we share and store knowledge through Indo-European text: the English-speaking in the film is loaded with unusually nuanced paradoxes that escalate scene by scene). It's in the dialogue: The horror of The Shining is spoken in confabulation, nursery simplification, deception, broadcast in a variety of technologies and qualities (like sarcasm and pure rage) - critical components to the dread laced in the flickering visuals that drive the film to its end. As an alternate to spoken plot, Kubrick uses visual forms from more than a few indigenous American cultures acutely arrayed (almost all employed complex spoken languages without written form/alphabets, like the Navajo), from a nearly decimated past, it effectively augments even bypasses western systems of description by very subtly alerting us to their visuals, motifs and even parts of their narratives and rituals. Perhaps an evolutionary tweak that doesn't or won't go away, The Shining, somewhat cooly and mildly reviewed upon release ("when I first saw The Shining I didn't love it but it has since become one of my favorites..." -Steven Spielberg) has evolved into a kind of cult film to adherents, could be the initialization of a movement to shift our tools en masse. Can we employ or deploy it? How? Do we need key narratives with the simplest of plots (the 'face') hiding paradoxically specific, scientific complexity underneath? Why/how do these latent, advanced systems of ordering and classification bypass the west's enlightenment-based taxonomic value-system?"
---Anita Sarkeesian decries the manic pixie dream girl
---Megan Abbot's "Pretty Tough"
---the apocalyptic Sweetheart trailer
---Joe Wright, director of Hanna, says "action is pure cinema" 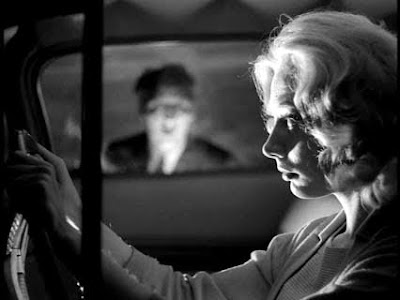 ---Don Kennison remembers the immortal Carnival of Souls:
"Carnival of Souls begins as if in the midst of a mental hygiene–type driver’s ed film. This abrupt entrée (known in the industry as a cold open) is startling for those used to the two- or three-minute intro formula: establishing shots, rising music, seemingly endless credit titles.’s low budget clearly shows (the opening sequence is shot sans sound; voices were added way on top later on) yet the jarring start forces a viewer to jump right in and try and figure out what the heck is going on. Well now the boys wanna drag the girls, and if you’ve seen Signal 30 (1963), produced over in Ohio, you know damn well it’s not going to end up pretty. What starts as a gas ends up in the drink, you guessed it: dig those heavy glug glugs as the girls’ car sinks into the muddy water. And here’s where the movie’s titles finally come up and the wholly eerie organ theme rises. No, this isn’t a novice driver’s warning, it’s something else entirely. It’s another world. Oh it may look like your world, but in point of fact you have just arrived on the planet Paranoia—paranoia rooted in dispossession: from your family, your peers, your society, so be it, yet finally and perhaps the final straw from your very self. That is, the self you thought you knew up to and including this very moment when you believed you were simply watching a movie. Our wary protagonist Mary Henry’s incipient paranoia and self-content willfulness throughout leads viewers (if not her fellows on-screen) to their own subtle varieties of disorientation, a kind of extrasensory horror that reaches through the screen." 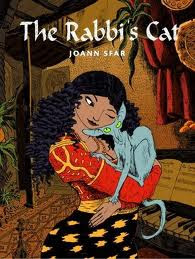 ---15 advertisements from 15 directors
---Punk in London
---"Sucker Punch and the Fetishized Image" by Oscar Moralde
---Anna Faris, scene stealer
---tech innovation explained and the asymmetrical online war
---The Imperialists Are Still Alive trailer
---Juliet Lapidos' grand theory concerning the films of Woody Allen:
"When an Allen character is in a particularly morose state of mind, he may feel moved to announce that life is meaningless. I call these "void moments," because the declarations often contain the word void. Despite the bleak moniker, the void moment doesn't always have the same function. Play It Again, Sam (1972), for instance, has a particularly lighthearted one.In this little-seen comedy, the recently divorced Allan Felix (Woody Allen) tries to get the hang of dating. Trouble is, he's romantically self-destructive: Felix (I'll use his surname to avoid confusion) says he's attracted to "emotionally disturbed women," and that's not an exaggeration. The depth of his perverse inclination becomes clear when he approaches a woman looking at a Jackson Pollock drip-painting, and asks what it means to her. She answers: "It restates the negativeness of the universe. The hideous, lonely, emptiness of existence. Nothingness. The predicament of man forced to live in a barren, godless eternity like a tiny flame flickering in an immense void with nothing but waste, horror, and degradation forming a useless bleak straightjacket in a black absurd cosmos." She's just the kind of woman Felix has been looking for, and he asks her what's she's doing Saturday night. "Committing suicide," she responds. Unfazed, he counters: "What about Friday night?"This nameless woman seems to articulate Allen's world view exactly. (After the 2009 release of Whatever Works, he told NPR that filmmaking "distracts me from the uncertainty of life, the inevitability of aging and death and death of loved ones; mass killings and starvation, from holocausts—not just man-made carnage, but the existential position you're in." Inspiring!) But in Play It Again, Sam, we're clearly meant to find her approach ridiculous. The depressive despairs: Because there is "nothing," she longs to return to that state. Felix, by contrast, moves forward blithely: If existence is lonely and hideous, why not go out on Saturday? Or Friday, whatever, he's not busy. By letting Felix win the volley, Allen also endorses his protagonist's resigned epicurean sensibility." 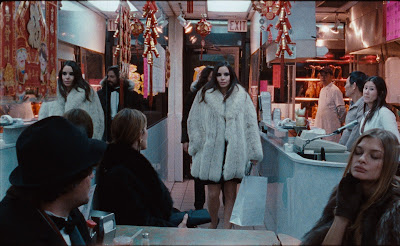 ---sad to see Geoffrey Rush shill for Disney
---Martin Amis's thoughts about Joan Didion's style
---are movies growing up?
---lastly, John Sullivan considers the career of David Foster Wallace:
"Imagine flat being able to dissect us like that, with that grain of detail—as primates, if you like—and worse, being unable to stop. A person would have to maintain tremendous stores of sympathy to keep the world from turning into a constant onslaught of Swiftian grotesquerie. Wallace didn't seek to escape it, either—he cultivated it, as his art demanded. It ought to remind us of the psychic risk involved in writing at the level he sought. Like all good citizens, I'm with those who wish to resist romanticizing his suicide, but there remains a sense in which artists do expose themselves to the torrents of their time, in a way that can't help but do damage, and there's nothing wrong with calling it noble, if they've done it in the service of something beautiful. Wallace paid a price for traveling so deep into himself, for keeping his eye unaverted as long as it takes to write passages like the one just quoted, for finding other people interesting enough to pay attention to them long enough to write scenes like that. It's the reason most of us can't write great or even good fiction. You have to let a lot of other consciousnesses into your own. That's bad for equilibrium."
Labels: Notable film and media links

Anonymous said…
The "Inside Job" video has already been removed. That went down quicker than Lehman Brothers.
April 6, 2011 at 5:54 PM