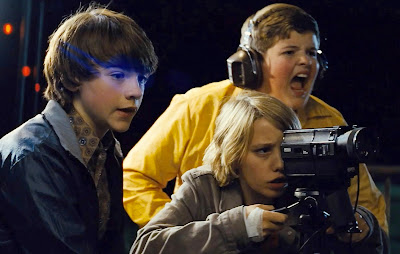 1) Blockbuster-wannabe filmmakers should be careful. Just as Matthew Vaughn should beware of the silliness of depicting blue and red men flying and fighting over the Atlantic Ocean in X-Men: First Class, so does J. J. Abrams need to watch for letting his Super 8 too closely resemble an amusement park ride. There's a moment later in the movie when the military opens fire on the suburbs at night. As the children run for cover, the scene struck me as fun but not really necessary, as if the filmmakers had resigned themselves to blowing things up as the storyline became more fragmented and incoherent in the third act. And yet, the beginning is so compelling, I feel tempted to gloss over those weaknesses.
2) Super 8 concerns a gang of young filmmakers who happen upon a monster after a military train derails during one of their shoots late one night on the outskirts of Lillian, Ohio in 1979. By setting the movie in this time, writer and director J. J. Abrams evokes two forms of nostalgia--one for the period (with a Walkman prominently featured in a scene), and another for the filmmaking style of Steven Spielberg, with many references to his films of the period, especially ET and Close Encounters of the Third Kind.

3) This layering of memories adds depth to the movie, but it also carries risks, especially when one figures out how traditional Abrams treatment of the monster turns out to be. At what point does an homage become a cliche? The sympathetic side of the creature betrays the film's more cuddly 1950s popular culture roots, pre-Night of the Living Dead. I was ultimately disappointed that the film isn't meaner, as Cloverfield tends to be. Super 8 makes multiple references to the first two Alien films, but it isn't interested in conveying those movies' Darwinian viciousness and survivalist ethic. The film has too much "heart" to move in that direction. Underneath all of the hype and mystery of the movie's advertising campaign, J. J. Abrams is exposed as a PG-13 softy, more interested in menace than in actual threat. Curiously, the kids' zombie movie within the movie is more given to characters dying, albeit in a comically crude way. 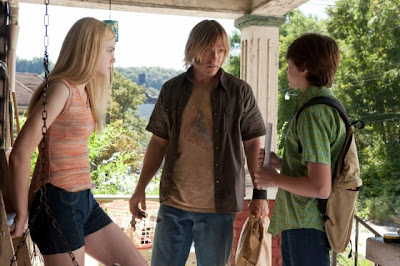 4) From Bourcher's "`Super 8' J. J. Abrams Reveals the Secrets of His New Film": "The movie began as two projects that ended up merging due to their individual deficiencies. The first was a non-fantastical tale of youngsters and the way they see the world and each other through the viewfinder of their Super 8 camera. Abrams took the vague notion to Spielberg and they decided to investigate further but a string of meetings with top writers in town ended with a lot of shrugs and consternation. Abrams said “there was not much there and it was frustrating because it would not go away in my head. … I couldn’t tell you what the story was. I knew characters, I knew situations, I knew there were issues of class and a love story at the core and that it would be a coming-of-age movie. A lot of the writers were lukewarm.”
Paramount, meanwhile, had bought a separate idea by Abrams for a spooky film about the 1970s scrutiny of Area 51 and how anxious government officials decided the best way to protect the classified possessions of the increasingly notorious military base was to ship them off to other sites aboard midnight trains — one of which never reaches its final destination. With this project, Abrams had “a pretty cool premise but no characters to speak of … so I was in possession of two halves and it occurred to me after six months or so to put them together.” 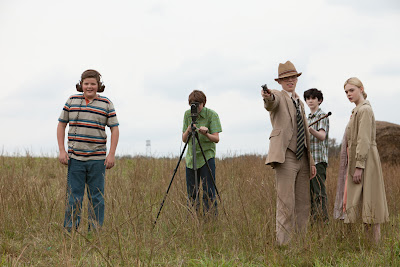 5) Super 8 works best when its genres (zombie, monster, military conspiracy, Romeo and Juliet-esque love story, comedy) collide, as they do when the filmmaking scene meets the train wreck, or when Joe (Joel Courtney) argues with the director Charles (Riley Griffiths) over their love for Alice in the midst of the found footage's reveal of the monster. So much else is going on by that point in the storyline (dogs and people and microwaves disappearing from Lillian, etc.), the developed footage becomes almost an afterthought. Also, Abrams entertainingly enhances his mystery with multi-media discoveries, such as when the boys investigate the history of the monster by watching military footage, listening to tapes, and reading classified documents. Eventually, the movie ties things up too neatly, but the combination of genres, multimedia, cinematic allusions, and historical references adds resonance to the ultimately rather cheesy and unoriginal monster mash core of the film.
6) Super 8 has a curious lack of three-dimensional older female characters. Is this some law of male-oriented blockbusters? Is it to make the dichotomy between the two fathers clear? (Joe's dad (Kyle Chandler) is a conscientious deputy while Alice's (Ron Eldard) is a ne'er-do-well.) Is it to emphasize the boys' worship of Alice (Elle Fanning)? Funny how the same thing happens in Elle's previous Sofia Coppola film Somewhere. It is as if Elle knows to choose roles that keep any female competition at bay.

Meanwhile, the film begins with Joe's mother's death in an unseen but possibly grisly accident in a steel mill. As the major characters mourn her loss, her death has much more emotional impact than any of the creature-feature pseudo-deaths that follow. We learn of Joe's relationship with his mother from a safe distance, by watching her on home movies.
7) Ultimately, the children's filmmaking proves to be best thing about Super 8. It allows them to be creative, providing another genre (zombies) to a movie already given to mixing genres. It helps create different dimensions in scenes in much the same way that 127 Hours and The Fighter foreground media variations within their story lines. The moviemaking process gets them out of the house and into the monster adventure. It allows them to show an affinity to Super 8's filmmakers that doesn't happen very often, a kind of genetic family likeness that leaves one to consider the real director behind the child director. At one point, Charles starts to tell Alice about the script, and she says peremptorily, "We get it. We read it." And Charles replies, "God, I'm just directing." 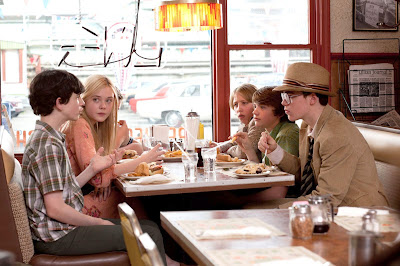 8) The filmmaking also allows the movie to reflect on its own genesis just as Joe gets to look at his own roots as a child in the footage with his mother. The creative process becomes a means for the two boys to romance Alice and a way for her to get free of her derelict father. It also allows Elle Fanning to show off her acting ability in rehearsal (she proves so persuasive in the scene, she dumbfounds everyone). The humorous play-acting of the crew ends up highlighting the fakery of the cheesier monster conventions of the latter half of the film. During the end credits, Abrams presents the kids' completed zombie movie. Since it remains unaffected by the rest of the movie's commercial calculations, its crudeness is oddly redemptive, and it shows how Super 8 has the right priorities. Whatever happens to the monster, the making of The Case matters most of all.
Labels: Super 8

Richard Bellamy said…
Yes, well said, and I agree - what matters most is The Case and, of course, the kids (mostly Joe and Alice - the other kids were two stereotypical and silly: the kid with the monster braces and the kid who pukes). Also, that big tank battle scene struck me as undramatic noise. Totally agree - "As the children run for cover, the scene struck me as fun but not really necessary, as if the filmmakers had resigned themselves to blowing things up as the storyline became more fragmented and incoherent in the third act." Unfortunately, the kids and The Case were not enough to make this movie more than a big disappointment for me. Abrams should have stuck with his original idea and made a movie about kids making a movie - although that's been done.
June 12, 2011 at 5:46 PM

Sam Juliano said…
This is a perceptive multi-prongued piece in your best style, Film Dr.! However, while I commend you on your creativity, I "dismiss the charges."

What distinguishes this film from the traditional multiplex fare is that it evokes a compelling sense of memory and nostalgia, and it features characters that we REALLY care about, always apanacea from bombastic pyrotehnics.

Of course, a film just about kids making a movie would not have sufficed for most viewers. I guess it's a matter of balancing the personal with the monstrous and the conspiratorial. I like the mixing of genres, but not the rough edges.

The movie does work on one's subconscious memories of that era on multiple levels. I like the reference to the Walkman, but not so much the traditional scenes of characters staring aghast at something unseen (then again, the film would have benefited from never showing the monster at all). At least we didn't have to look at any puddles quivering as the dinosaur, I mean monster drew near.
June 13, 2011 at 5:53 PM

Free Online Astrology said…
One more thing Hollywood needs to remember is that a film for Kids does NOT contain the "F" word.

I guess the scriptwriters either have a limited vocabulary or are actively trying to get it in there since it's such a useful word.

I didn't even notice the f-word.

Yet, there's still an imbalance between the rich nostalgia and the tamed monster component (the film would have benefited from more overtly eaten humans).
June 17, 2011 at 8:07 PM

Jason Bellamy said…
Underneath all of the hype and mystery of the movie's advertising campaign, J. J. Abrams is exposed as a PG-13 softy, more interested in menace than in actual threat.

On the lack of adult females: I hadn't thought of that. I wonder if mothers are just too naturally comforting and Abrams was trying to capture the isolation of the two key kids at that period just before men started to become more involved in their kids lives?
June 22, 2011 at 8:08 PM