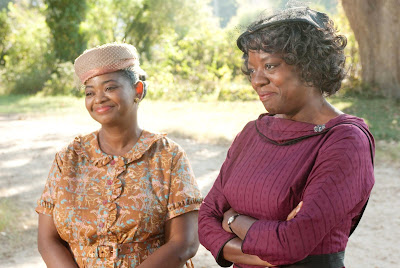 ---on race and Hollywood, the Association of Black Women Historians' critique of The Help, and Valerie Boyd's review:

"Like the novel on which it’s based, the movie adaptation of “The Help” will likely be a huge hit with white audiences. But for black viewers it is condescending and frequently insulting, despite admirable performances by Davis and Spencer, who bring a measure of complexity — actual flesh and blood — to the characters of Aibileen and Minny. It speaks volumes about the ongoing racial chasm in this country that a feel-good movie for white people will leave many black filmgoers feeling sad — and pessimistic that America can ever become anything more than “a nation of cowards.”

---Eyes on the Prize's intro

"There is a long curve of water and, as far as the eye can see, there are shacks, garbage, washing, tin, bits of wood, scraps of cloth, rats and children. The water is grey, but at the edges there's a flotsam of multicoloured plastic rubbish. This is the Estero de San Miguel, the front line in an undeclared war between the rich and poor of Manila. Figures emerge from creaky doors to move along bits of walkway. In the deep distance is the dome of a mosque; beyond that are skyscrapers.

Mena Cinco, a community leader here, volunteers to take me in - but only about 50 yards. After that, she cannot guarantee my safety. At the bottom of a ladder, the central mystery of the Estero de San Miguel is revealed: a long tunnel, four feet wide, dark except for the occasional bare bulb. It's just like an old coal mine, with rickety joists, shafts of light and pools of what I'm hoping is water on the floor. All along the tunnel are doors into the homes of as many as 6,000 people. . . .

This is the classic 21st-century slum. A billion people live in them, one in seven of the world's population. By 2050, according to the United Nations, there could be three billion. The slum is the filthy secret of the modern mega-city, the hidden achievement of 20 years of untrammelled market forces, greed, neglect and graft."

---Brando's screen test for Rebel Without a Cause

---how the US crushes youth resistance:

"The Normalization of Surveillance. The fear of being surveilled makes a population easier to control. While the National Security Agency (NSA) has received publicity for monitoring American citizen’s email and phone conversations, and while employer surveillance has become increasingly common in the United States, young Americans have become increasingly acquiescent to corporatocracy surveillance because, beginning at a young age, surveillance is routine in their lives. Parents routinely check Web sites for their kid’s latest test grades and completed assignments, and just like employers, are monitoring their children’s computers and Facebook pages. Some parents use the GPS in their children’s cell phones to track their whereabouts, and other parents have video cameras in their homes. Increasingly, I talk with young people who lack the confidence that they can even pull off a party when their parents are out of town, and so how much confidence are they going to have about pulling off a democratic movement below the radar of authorities?" 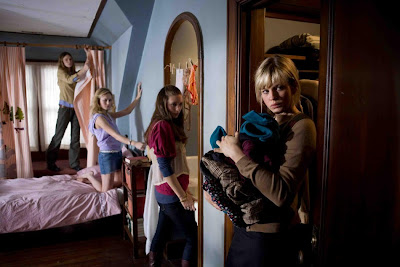 ---an interview with Billy Wilder

---trailers for Littlerock, Trespass, We Need to Talk About Kevin, Coriolanus, Tanner Hall, and The Black Power Mixtape 1967-1975.

---Anne Hathaway's reply to the paparazzi 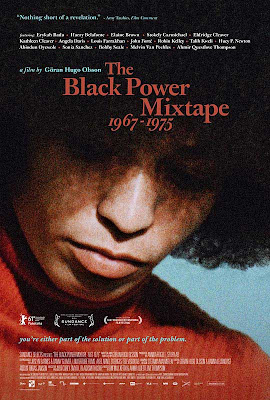 "The synchronized, semaphorelike movement of doors throughout The Killing suggests some sort of mysteriously vast machine, an intricate apparatus vaguely built around the horse race itself, whose very signal to begin is, after all, the precision opening of the multiple gates that simultaneously release the horses and trigger the robbery. The machine metaphor elaborated throughout The Killing is also closely tied to Ballard’s assertive camera movements and the remarkable extended tracking shots that follow characters with an unsettling fixity, as in the scene introducing Clay. Keeping exact pace with Clay as he ambles toward the anxious embrace of his winsome girlfriend, Fay (Coleen Gray), Ballard’s gliding camera cuts a neat cross section through a series of connected rooms in its path, transforming the apartment interior into a type of controlled tunnel that exactly describes and limits the possibilities of movement—a striking illustration of entrapment that subtly parallels the camera’s and actor’s “tracks” with those of the horse race. Indeed, a comparison between man and horse runs throughout the film, captured cruelly in the whinnying, equine look of Carey’s face as he is shot—after his car tire is punctured by a horseshoe, no less—in a distorted carnival-mirror reflection of the horse he himself has killed just moments before. In addition, during the long execution of the robbery itself, each member of the gang seems to be locked in an extended relay race, tracked by the mobile camera as they move across the screen, their actions closely commented upon by a stentorian voice-over narration echoing that of the horse race announcer."

Sam Juliano said…
What's really sad is that some viewers speak for others in their disparaging views that initimate racial condesention in a story of friendship set in a volatile time when the south was a hotbed of racial tensions. I liked THE HELP, which seemed to bring together the best qualities of DRIVING MISS DAISY and FRIED GREEN TOMATOES in an engaging story of humor and poignancy that apparently was true enough to its source.
August 19, 2011 at 8:05 PM

The Film Doctor said…
Thanks, Sam. I liked aspects of The Help too (what's not to like about Emma Stone's character wanting to become a writer?), but I found Valerie Boyd's and Melissa Harris-Perry's discussion of the "racial chasm," the way that some viewers seethe at the inaccuracies of the movie as others weep, to be much more interesting than whatever I may write in response to The Help. It's a very rhetorical movie, in part because the extremely high quality of Viola Davis' and Octavia Spencer's acting can so easily distract us from the problematic distortions in the depiction of the south at that time.
August 20, 2011 at 2:20 AM