"No Treatment Protocol": Steven Soderbergh's Contagion and The Die-Off Scenario 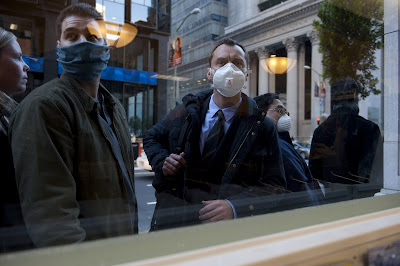 I've been looking forward to Contagion all summer, but my anticipation hasn't had much to do with enjoying the threat of a major outbreak of an new virus, even if such a threat is genuine. I wanted to see the movie because it acknowledges human overpopulation and the likelihood of its stiff decline in numbers at some point. Scientists refer to the "die-off," a frequent occurrence when a species abruptly uses up its natural resources. It can happen with a microorganism in a petri dish, or with a population of reindeer, or with humans on Easter Island, who ultimately were obliged to dig up the corpses of its dead for food (leaving one wondering: who was dumb enough to cut down the last tree?).

What causes this die-off can vary of course. I confess that I like to have long discussions about bleak planetary possibilities with a Chemistry professor friend of mine over lunch at a Chinese buffet restaurant. Since the earth cannot readily sustain itself without the human population dropping to approximately 1-2 billion, what will happen to the approximately 5-6+ billion? We tend to prefer peak oil theories, the way the coming decline in the amount of oil will cause civilization's collapse, but of course a major new virus will do as well if not nuclear war or what-have-you. As a part of this discussion, I tend to enjoy movies that find ways to depict this grim world view: Children of Men (mass-sterilization), Collapse (peak oil), and now we have Contagion.
In Contagion, director Steven Soderbergh blends horror, medical thriller, and disaster elements that evoke a kind of die-off, but the movie ultimately (spoiler alert) shies away from fully facing its implications of societal breakdown. I admired the film's cool dry intellectual tone and alienating imagery (lots of glass, body bags, Hazmat suits, etc.), but I felt let down by the compromises of its third act. Faced with depicting a mass unravelling of the civil order, Contagion flirts with riots, mass graves, rampant crime, and survivalist stockpiling within bunkers, and for awhile I enjoyed the suspense of watching the brave people of the Centers for Disease Control and Prevention (CDC) trying to outwit this viral villain before it kills off so many millions, but the movie doesn't have the inclination (or the time) to fully depict the collapse of our justice system, the government going underground Dr. Strangelove-style (or online), and people starving once our transportation system gets snarled up due to mass quarantines. 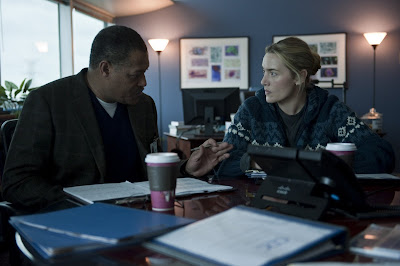 Beyond those larger questions, the filmmakers of Contagion have to decide which characters can remain alive long enough for the audience to identify with them. After he abruptly loses his wife Beth (Gwyneth Paltrow) and son to the contagion, Mitch Emhoff (Matt Damon) proves immune to the disease, so he watches marauders break into the upper middle class suburban home across the street and possibly kill its owners with rifles (we hear the gunfire). When he goes with his daughter to the grocery store, he finds sick people looting it, so he can't take anything for what's left of his family. Still, even given this sense of things getting out of control, Soderbergh depicts the Emhoff family's plight mostly in terms of an extended suburban imprisonment as they wait for a vaccine.
And what about the blogger Alan Krumwiede (played with such delicious seedy abandon by Jude Law)? For some reason, I did not care much for Contagion's negative stereotyping of the alarm-sounding blogger (he distributes an early viral video of a Japanese man collapsing from the disease in a bus). Alan turns out to be prescient about the crisis, especially about the speed of the virus' exponential spread, but he's also greedy, opportunistic, and a profiteering liar. As Dr. Sussman (Elliot Gould) humorously points out at one point, "Blogging is just graffiti with punctuation." Why can't movies portray bloggers as heroes with a valid voice amidst larger forms of corporate propaganda? Alan is instead an annoying caricature eager to trumpet the death of print media, but he also predicts how unreliable the media will become in this die-off scenario because no one in the higher levels of government or the media will want to speak the truth when all it will do is cause riots and further undermine what's left of the civil order. What's to stop CDC officials from trying to rescue their loved ones from a soon-to-be-quarantined city before anyone else fully understands the extent of the problem? I can imagine that the media in the midst of a major crisis would become very strange, a mockery of any kind of journalistic integrity, and the internet would become even more of a mass misinformation machine of rumors, paranoia, and only occasional small inklings of truth. 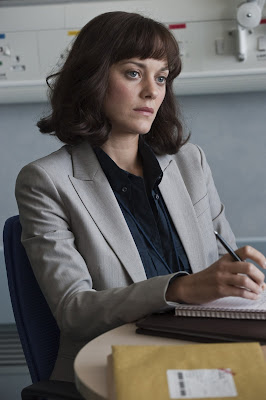 Meanwhile, Contagion's "realism" also happens to feature beautiful movie stars such as Marion Cotillard, Gwyneth Paltrow, and Kate Winslet. As CDC Dr. Erin Mears, Winsett works hard to to quarantine the sick within stadiums before she abruptly contracts the disease. Winslet then shows integrity and convincing heartbreak and regret when talking to CDC head Dr. Cheever (Lawrence Fishburne) about how she cannot help anymore. As she says she sorry, she looks out of her hotel room at the military convoy driving past on the empty streets below. Still, there's no particular reason why Marion Cotillard would play Dr. Orantes, an investigator for the World Health Organization, aside from the fact that she's French and can shows pangs of conscience when her character gets kidnapped for some vaccine. I can imagine that some might take pleasure in Gwyneth Paltrow playing the unaware villain who first spreads the MEV-1 virus across Hong Kong, Chicago, and Minneapolis during a business trip. When you factor in Fishburne with his Matrix gravitas, and Matt Damon's earnest performance, the collected star wattage of the cast is both pleasant and a bit distracting. Were they all willing to cut their usual fees for the cause? As in the case of any large-scale disaster film such as The Towering Inferno, Contagion doesn't have much time to develop any particular story arc, so we don't get the in-depth characterization that we are accustomed to receiving from these actors. They enhance the movie, but they don't seem particularly needed.
Beyond all of the Hollywood glitz, Contagion does display a nice grasp of the terminology and the cold medical tone needed for such a story ("no treatment protocol," "transmission," "social distancing," "triage," "cook your samples," "incubation period," "ADHD," etc.). Soderbergh knows how to quarantine his characters behind doors, within sealed hospital rooms, and inside taped body bags. Also as the one-time director of Kafka (1991), Soderbergh understands the subtle Kafkaesque implications of our institutions (the press, the CIA, the government) not knowing how to handle this crisis without bumbling, repressive measures of their own.
Steven also conveys the confusion, the rumor-mongering, the despair, and the many fears of this situation well (fears that are not far removed from our current worries about economic crises, spiraling debts that threaten government default, terrorism, and so on), but when it comes to fully facing the realistic concerns of an out-of-control pandemic, Contagion blinks, if only because the likely outcome of its story is still too bleak for a Hollywood movie that depends on a pseudo-happy ending for profits. 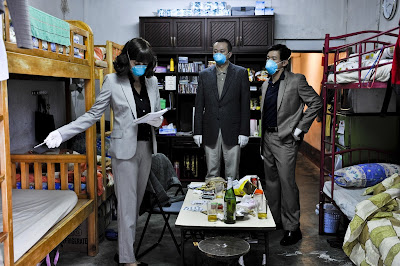 Contagion is mostly good at diagnosing our contemporary fears and what may follow, but not at fully confronting its implications. That movie still needs to be made. As Kafka wrote, "Our art is a dazzled blindness before the truth: the light on the grotesque recoiling face is true, but nothing else."
Labels: Contagion Die-Off Gwyneth Paltrow Jude Law Kate Winslet Lawrence Fishburne Marion Cotillard Matt Damon overpopulation pandemic Steven Soderbergh

This is one of your trult great pieces, Film Dr., in every sense. My wife and I have tentative plans to see this tonight at a local multiplex, but I am not sure at what time. I won't deny I've been disappointed with Soderbergh's last several featues, including CHE and THE GIRLFRIEND EXPERIENCE, but he's an artists I'll always make time for. Again a brilliant, fascinating analysis.
September 11, 2011 at 1:57 PM

Richard Bellamy said…
"Steven also conveys the confusion, the rumor-mongering, the despair, and the many fears of this situation well (fears that are not far removed from our current concerns about economic crises, spiraling debts that threaten government default, terrorism, and so on), but when it comes to fully facing the realistic concerns of an out-of-control epidemic, Contagion blinks, if only because the likely outcome of its story is still too bleak for a Hollywood movie that depends on a pseudo-happy ending for profits."

Well said above. Like you, I love books and movies about population-reducing events, and I also love speculating about what I would do in such a disaster.

So, I loved the societal collapse, and I was disappointed that the pat solution comes too quickly. I also looked forward to this movie, and I was all geared up for an intense descent into disastrous chaos, but the film only goes so far.
September 11, 2011 at 6:21 PM

The Film Doctor said…
Thanks, Sam. I tend to like Soderbergh's work ever since Sex, Lies, and Videotape, with Out of Sight being my favorite. I hope that you enjoy Contagion.

Thanks, Hokahey. I enjoyed your post. The awkward fact about die-offs--oftentimes, every animal gets wiped out. With Contagion, it's hard to tell if the pandemic is just another corrective in the size of the population or something larger. Especially in the case with the Emhoff family, the filmmakers don't seem to want to lose that sense of suburban normalcy. If you barricade yourself in your house, everything will be fine--what an odd reassurance for the audience.
September 12, 2011 at 5:08 AM

Jason Bellamy said…
I finally saw this today. What a terrific review.

Over at Hokahey's review, you said you enjoyed the film for the questions it inspires. That's the way I felt.

For better or worse or just different, it's a profile of an epidemic outbreak, not an examination of the humans it effects. That is, we never really bond with any of the characters, and the scenes showing these characters trying to deal with the epidemic are there really to show the devastating trickle-down effect that such an epidemic would have on our lives.

Alas, sometimes this leads the film into tricky situations, such as the subplot with Damon's daughter. Her character reminds us that even those lucky enough to survive would have their lives totally disrupted, and that's great. But there are moments when it seems Soderbergh also wants us to be moved by this character we hardly know, feeling sad because she can't make out with her boyfriend when around her people are dying by the thousands.

I agree that the subplot involving Damon's daughter doesn't fully work. Several of the narrative strands just hang there at the end, but the questions the film raises are still very valid.

I wonder if anything can beat the one-two punch of Contagion and Drive for the rest of the year.
October 3, 2011 at 3:41 AM

Shazzy said…
I have never really liked a Soderbergh film but I did not expect to hate this film so much.

It was shapeless, formless, without any focus and even visually unremarkable. Why Matt Damon's character must be singled out for a special treatment remains a mystery. Only in his (shallow) 'story' there is some room for any emotions. Winslet's character, supposedly an expert, prances around the city without any mask and no wonder ends being a victim herself. Law wants to expose the 'corruption' but there are hardly any people left on the streets to expose it to.
January 26, 2012 at 11:43 AM