"I only think with a pencil in my hand": James Wolcott on Pauline Kael's writing technique 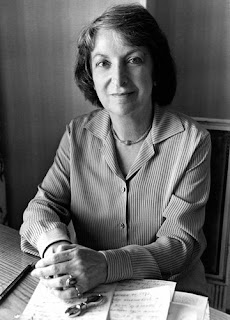 I've been enjoying James Wolcott's 1970s memoir Lucking Out: my life getting down and semi-dirty in seventies New York  (Doubleday, 2011), especially his account of his friendship with Pauline Kael ("the greatest film critic then or now").  Here are some choice quotes about Kael's writing techniques:

"Pauline didn't have the luxury of Wordsworthian contemplation, not with her pressure-cooker schedule, a vicious cycle of deadlines that had her meeting herself coming and going.  She did her writing on the second floor of her house in Great Barrington, Massachusetts, bent over a drawing table facing light-flooding windows looking out on her long, descending lawn to the road below.  She wrote in pencil with a rubber thimble on her thumb, her phenomenal concentration pouring from the point of her pencil across the page as she followed the line of argument wherever it led, keeping every circuit open.  In his memoir-mediation Sontag and Kael: Opposites Attract Me, Craig Seligman recalls sitting on the veranda of Pauline's house, staring vacantly, when Pauline asked him what he was doing. `Thinking,' he replied. `I only think with a pencil in my hand,' Pauline said, a bit of an overstatement, but what it was overstating had a core validity; the pencil point was the drill bit that drove through surface resistance, releasing unconscious energies and correspondences.  She scorned reviewers who outlined their pieces in advance, executing a blueprint, saying of one such practitioner, `That's why his pieces read like term papers.'  She wanted the writing to read like one long exhalation that would seize the reader from the opening gunshot and then drop him off at the curb after a dizzy ride.  The first draft was given to her daughter, Gina, for typing, and then corrections were made on the typescript. Pauline would then be driven to the city, where by day the piece would go through The New Yorker's fanatically fly-eyed round of copyediting and fact-checking while at night she would catch screenings of the movies she would review for the next column, returning to Great Barrington to write over the weekend and then back again to the city, a rapid turnaround that could have devolved into a repetitive grind for someone simply filing copy.  But Pauline was still riding the crest of the crescendo that was Deeper into Movies (1973), the collection of reviews that stamped her name as the most important and embattled film critic in America, her championing of The Godfather, McCabe and Mrs. Miller, Cabaret, Steven Spielberg's Sugarland Express (when most critics preferred Terence Malick's Badlands) helping augur the seventies resurgence of American cinema that left us with such beautiful scars and drizzly haze.  It was the feudal age of criticism too, when criticism retained the ability to make readers mad in both senses of the word, angry-mad and crazy-mad . . .

In his book, Seligman quotes one of Pauline's editors at The New Yorker, John Bennet, describing the complexity of her creative-destructive grid work. `Balzac, madly revising at his most caffeinated, Proust at his most hypodermically caffeinated, had nothing on Pauline when it came to crossing out, writing all over the margins, taping extra sheets of paper to the margins to make even more revisions--revisions of revisions, inserts inside inserts.' Entire paragraphs were x-ed out and new ones inserted, sentences were transposed within paragraphs that themselves were moved around like modular furniture, commas delicately planted by The New Yorker's notoriously comma-promiscuous copy department (resulting in sentences that resembled a higher plane of constipation, bogged down in late-period Henry James particularization) were plucked out and em dashes liberally thrown in like left jabs.  Even without the benefit of literacy, strictly as an eye exam, her pieces looked more alive on the page than those of anyone else (save for Donald Barthelme and his typographic Monty Python circus).  Nearly ever cut and addition she made was to foster idiomatic verve, direct contact, and acceleration, the hum of a live broadcast. 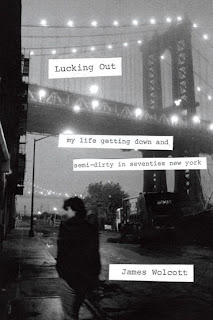 Tender feelings were a fraudulent cover for larger failures of nerve. (Pauline agreed with Nabokov's contention that sentimentality and brutality were the flip sides of a subservient mind.)

It was Pauline's practice and principle to beam a movie into her brain once and move forward, believing that the first responses were true responses and that repeated viewings gave rise to rationalizations, a fussy curatorship--a consensus-building exercise in your mind full of minor adjustments that took you further and further away from the original altercation (although she did go see Robert Altman's McCabe and Mrs. Miller a second time, anxious to confirm her original feeling that it was a great melancholy beauty of a movie worth going to the wall for). She wanted the nerve endings in her reactions exposed, not neatly tapered and trimmed."

Thanks to Craig of The Man from Porlock for recommending this book.
Labels: James Wolcott pauline Kael writing technique

Craig said…
Glad you're enjoying it, Film Doc. Wolcott mentions things that somehow escaped Kellow's research, such as what was evidently PK's catchphrase ("...like civilized people"). I'm a fast reader, and Wolcott's book is a fast read for even slow ones.
April 14, 2012 at 9:49 AM

The Film Doctor said…
Yes, I like Wolcott's style, and the decorous way he gets out of the way when Pauline Kael arrives on the page. The 1970s punk rockers (also covered in Hermes' Love Goes to Buildings on Fire) come off as slightly pretentious in comparison to Kael's talented presence.
April 15, 2012 at 9:44 AM