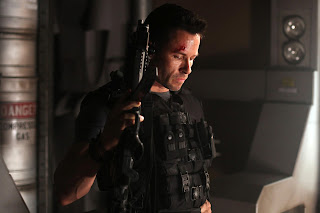 Oh, that sinking feeling--I shouldn't have bet on this puppy. When I went to see Lockout, I was hoping for a light noir ersatz Blade Runner knockoff with anti-prison industry overtones and Guy Pearce cracking wise much as Bruce Willis does in the original Die Hard (1988). I got some of that and yet much less, a clanging ordeal to endure. I have a weakness for movies associated with Luc Besson (who produced this one and came up with the "original" concept idea).  I keep hoping that Besson will pull off something with the colorful pizazz of The Fifth Element, or the Parkour-inflected visual flair of District B13, or another variation of the lithe La Femme Nikita hitwoman in movies such as last year's Colombiana. Besson keeps cooking up these films like savory French sausages (les saucisses), but the quality control seems erratic, so you get nightmare versions of belligerent foreign policy in the form of John Travolta stupidly shooting up Paris in From Paris with Love or an angel visiting Paris to help out a scam artist in the stylishly vacant Angel-A.

For Lockout, Besson dreamed up a (one would think prohibitively expensive) maximum security prison out in space in 2079 where around 500 convicts are put to sleep in pods (reminiscent of 2001: A Space Odyssey) using a psychological technique called "stasis" that can cause dementia in minor characters who might know some key bit of information. After sinister government officials determine that the smart-ass Snow (Guy Pearce) must head out to space to save the US president's daughter Emilie (a wooden Maggie Grace) from being trapped in a prison uprising, the movie becomes steadily less compelling. I don't mean to sound callous, but aside from the president's concern for his daughter, who really cares if all of the reawakened convicts take over?  It's not like they can terrorize the countryside.

As the film persists, new events tend to happen with less and less consequence. Space shuttles appear, leaving one to wonder why they look exactly the same in 2079. The international space station crashes into the prison, just to have something to do. Snow makes cracks about wishing that Emilie would shut up. I increasingly found myself focusing on the cheesy orchestral soundtrack designed to bolster the proceedings with horns and feisty violins, but the more the music insisted on thrills, the more overblown and forced the movie became. To save her from peril, Snow dyes Emilie's blond hair black and punches her in the face so she can (kind of) blend in with all of the other mugs in their orange uniforms. 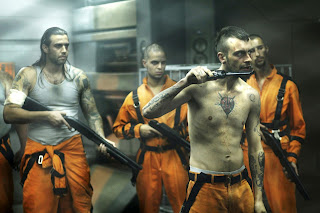 One loopy convict named Hydell (Joseph Gilgun) threatens the proceedings with a bit of Trainspotting delirious anarchy as he executes the innocent and drools over Emilie, but the villains only succeed in looking menacing. Later, Besson includes a Star Wars-esque dog fight between small spaceships as Snow and Emilie hunt for an escape pod on level 5.  I should've escaped at that point and snuck into the theater showing The Cabin in the Woods.
Labels: Lockout