Insulated by technology: a spoilerific analysis of a later scene in The Cabin in the Woods 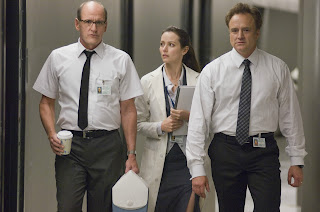 Spoiler alert!  Do not read further if you haven't seen The Cabin in the Woods.  This analysis is intended for those who have.

"Whedon shared an idea for an orchestrated horror story in which the scary cabin is part of a sealed environment controlled from an underground lab. Then he mentioned his idea for the title. `As soon as he said he was calling The Cabin in the Woods, I was in,' Goddard said." --this quote and upcoming ones all stem from an interview by Maria Elena Fernandez

I've been fixated on the metaphorical implications of the underground lab and the "corporate techie types," Sitterson (Richard Jenkins) and Hadley (Bradley Whitford), two ordinary-looking middle-aged men who begin The Cabin in the Woods oddly discussing the travails of one of their wives baby-proofing their home.

"When we first started it, Joss pitched that originally, `I want to start it with two guys in a break room, talking about fertility.'” --Drew Goddard

Why start the film that way?  The two men appear banal as if they have just walked out of The Office, bored, at ease with each other, and blase about the mission in front of them that they have performed many times before.  They are complacent about this business of orchestrating a sophisticated attack on 5 teenagers in their sealed environment in the "woods." The viewer gradually realizes that Sitterson and Hadley are amoral monsters, but they seem very realistic.  Are they stand-ins for CIA agents? Whedon and Goddard? The military? Distant operators of drone technology?  Spies?  Jaded thrill-seeking horror-movie viewers? Film producers? Agents of fate or Old Testament justice?  Puppet masters? Media professionals? Whatever they may resemble, the two otherwise likable men are clearly insulated by their technology and habits, used to observing horrific things on screens without any personal investment or perceived risk.  They enjoy the privileges of a secure income, high levels of technical knowledge, and the ability to manipulate and observe with impunity the young and the gullible. They are bright and competent, if a bit unaware of the implications of their actions. Richard Jenkins can appear even more horrific if one remembers that he also starred in Eat Pray Love (2010).

One gets to see just how callous the corporate types can be later when a climactic bloody battle between the teenager Dana (Kristen Connolly) and a redneck zombie on the dock of the lake abruptly becomes background visuals on monitors in the lab as the technical crew celebrates the supposed end of a successful evening while indifferently partying and listening to (of all things) REO Speedwagon's "Roll with the Changes." The dated, cheesy quality of the song accentuates their middle-aged lack of taste. Dana's torment is not enough by itself--they need music! We see various crew members using their opportunity to mingle and flirt as they sip drinks.  Dana's horror becomes decorative movement on the monitors much like sports on the flat screen TVs of a sports bar. Whedon and Goddard oblige us to consider how much we vicariously share in the lab technicians' lack of emotion. How much is the scene bothersome because it interrupts and obscures the bloody fight scene on the dock? 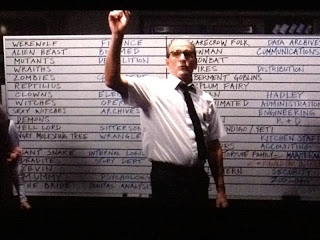 Other aspects of the film to analyze: its allusions to Psycho, Willy Wonka and the Chocolate Factory, and The Shining, the encyclopedic use of monsters (making the film a kind of all-inclusive discourse on horror method), and the way Chris Hemsworth helps Whedon and Goddard mock the concept of the hero, as it were, redeeming him for his work in Thor.
Labels: The Cabin in the Woods

Richard Bellamy said…
I love how you always find lots to analyze - in whatever film, FilmDr. As for the scene you discuss here, I took it as a parody of The Office. But sometimes the silly tone of the two tech dudes and the government-controlled set up was, well, just silly.

The film reveals in the very beginning that the whole thing is an experiment or set up. Why do it that way? Why not reveal that as a surprise when Hemsworth on the motorcycle smacks into the border of the grid? Why not do a more serious approach - throw out the whole blood sacrifice to the gods absurdity? I liked the film's premise - I liked the concept of all the legendary creatures kept in cubes that could be inserted into the situation as needed. The film went for silly parody and came off as silly parody. Sometimes a more serious approach implies its own parody in a more subtle way. I guess what I'm saying is that I'm in for the whole ride with the cabin and the government installation (except for the gods thing) but it's got to be gripping to take me along.
April 19, 2012 at 11:49 AM

Maurice Mitchell said…
Film Dr, I assumed it was just another slasher film until I read this. I had no idea it was so complex. Considering this is Whedon I should have known better. I wonder if this is recurring with Whedon from "Dollhouse?"
- Maurice Mitchell
The Geek Twins | Film Sketchr
@thegeektwins | @mauricem1972
April 19, 2012 at 12:58 PM

Thanks for your thoughts. I often find films silly and excessively parodic, but for some reason I was enthralled by the frame narrative of the two techie types in Cabin and intrigued by all that they may represent. We've already seen a similar set-up in The Hunger Games, where nature combines with hi-tech surveillance to create a place where the younger and poorer can die. It all leaves me wondering if increasing class divisions and the growing gulf between the young and the old foreshadow some gladiatorial future.

I also liked all of the monsters in the Willy Wonka-esque elevators. The movie reminded me a bit of Citizen Kane in the way it attempts to draw upon the entire catalog of horror film tropes (just as the earlier film drew upon an encyclopedia of film technique) to round out its conclusion. Also, the way Sigourney Weaver works in the movie by hipster association. Just because we associate her with Alien and Ghostbusters, she enhances the movie at a key moment indirectly.

Lastly, I didn't have any problem with Goddard's and Whedon's use of blood sacrifice as a motivating force behind the film. I tend to view the world in Old Testament terms of irrational judgment anyway, so there was no problem (Also the movie reminded me a bit of Ancient Greek notions of people being the playthings of the Gods).

I'm not familiar with Dollhouse (although I'm a fan of the Buffy series), so I don't know. The Cabin in the Woods only looks simple. It's one of my favorites movie thus far this year.
April 19, 2012 at 4:35 PM

Richard Bellamy said…
FilmDr. - "The playthings of the Gods." That's well said and therefore the sacrifice bit is fitting. Despite not liking the sacrifice/gods premise, I did enjoy Weaver's iconic presence. Interesting how associations work. When she made her appearance, it was clear how much the movie leans more toward science fiction than horror with the sort of Westworld technology and all the tech geeks controlling how things turn out. Even though the film doesn't save its premise for a dramatic reveal toward the end, it is very much a Twilight Zone sort of surprise.
April 19, 2012 at 6:21 PM

The Film Doctor said…
Yes, I think I was weirdly prepared for Weaver's arrival--not that her cameo made a whole lot of sense except in some deep popular culture substratum way, and that was part of the pleasure of it--one can associate her with the monster in Alien and the Pillsbury Dough Boy of Ghostbusters. Somehow, it just made sense. Not many other actresses would have worked as well. Perhaps Jamie Lee Curtis?

I also liked the way Whedon and Goddard steered clear of vampires. Their choices of monsters seemed very astute.
April 20, 2012 at 6:17 AM