A memory of a fantasy in a miniaturized world: Moonrise Kingdom's techniques 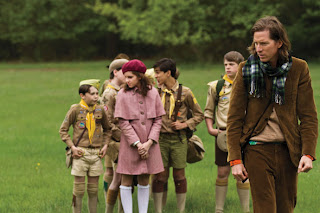 Moonrise Kingdom left me wondering about how Wes Anderson uses cinematic techniques to convey a story, how form and content go together in his work, how he uses multiple forms of communication (letters, maps, fashion, inventories, diagrams, allusions, tableaus, yearbooks, paintings, megaphones, etc.) to overwhelm the viewer with coded information that goes far beyond the most filmmakers' strategies. As Glenn Kenny writes,

"Even more so than in The Darjeeling Limited, Anderson is here working in the tradition of the filmmakers Michael Powell and Emeric Pressburger. The duo's The Red Shoes, I Know Where I'm Going!, A Canterbury Tale and so many more were examples of what Powell called `the composed film,' a movie in which each element was worked out to meticulously mesh with the other, a movie in which all of the art forms that inform movies -- painting, music, theater, sculpture, the whole lot -- are brought to bear with equal emphasis, a movie in which the contours of the real and the fantastic rub freely against each other to produce ... well, hopefully a kind of aesthetic alchemy. Moonrise Kingdom partakes of the traditions of, among other things, the fairy tale, the Looney Tunes cartoon and, yes, Shakespeare. One of the film's pivotal moments comes at nightfall, and the Britten-studded soundtrack offers one of the most beguiling musical moments from that composer's opera of A Midsummer Night's Dream: the fairies' song `On the Ground, Sleep Sound,' which assures that `all will be well.'"

Given its own tendency to inventory things like what Suzy (Kara Hayward) and Sam (Jara Gilman) bring along with them during their escape into the woods, Moonrise Kingdom constantly invites analysis even though Anderson himself (understandably) tends to be vague about his creative process in his interviews. He claims that the genesis of the movie came from a period when he fell in love at approximately age 11. He scarcely spoke to the object of his affection (who remains nameless), so Moonrise Kingdom constitutes what he wished had happened, in other words, a "memory of a fantasy." He augments that fantastic element by having Suzy carry imaginary books in her suitcase, and by setting the story in 1965 on an imaginary island which one could only reach by ferry from the mainland. Anderson blends together the real (a Westinghouse refrigerator) with the imaginary (the Khaki Scouts) throughout the movie, and the effect could become coy and twee very easily, but Anderson's clear-headed emphasis on the detail keeps the movie grounded. Moonlight Kingdom is often dreamy but never vague, and the complexity of each shot keeps teasing the viewer with hints of deeper layers of interpretation.

Jim Emerson has neatly analyzed the movie's techniques to the point where he admits that he's not even writing the usual movie review. The film's techniques intrigue him enough:

"A miniaturized world, detached camerawork, symmetrical proscenium framings, a narrator who makes eye contact and would break the fourth wall if there was one: How many more distancing devices can we get? Well, the characters compartmentalize their emotional worlds through punctilious modes of communication (especially hand-written notes and letters with formalized closings, like `Signed, Suzy Bishop') and clipped, stylized speech patterns. (The policeman talks like a policeman; Social Services -- her only name -- talks like a manual from DSHS; the policeman talks like a policeman; the scoutmaster talks like a scoutmaster -- first he says he's `really' a math teacher and a scoutmaster second, but then he reverses himself in a way that's both mathematical and scoutworthy; the Bishops, both lawyers, bond through their legalese... Their language sets them off and identifies their membership in a tribe). The movie repeatedly uses split screen effects (there's that order-imposing symmetry again). And the binoculars through which Suzy Bishop (Kara Hayward) likes to look at things, because they make everything seem closer even if they aren't very far away to begin with. That's the metaphor for Anderson's style: looking close at the tiny details, but maintaining distance. The lens always separates the viewer from the view."

Suzy Bishop says in the movie: "I always use binoculars because it helps me see things closer, even if they're not very far away. I pretend it's my magic power."

Other questions and thoughts: 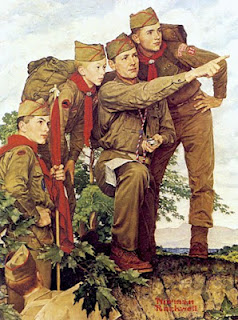 How does the Biblical story of Noah's Ark tie into the story? In the previously mentioned interview, Anderson shared that as a child he once participated in a production of Britten's Noye's Fludd (a church opera). In Moonrise Kingdom, Suzy and Sam meet during a showing of the selfsame opera.  Later, they don the opera's cat costumes during a climactic scene which also involves a flood hitting the island.

How much does Anderson's emphasis on older technologies like record players, tape recorders, and such tie in with what Nathan Jurgenson calls our "current obsession with the analog, the vintage, and the retro," i.e. the "fetishization of the offline"?

Couldn't one call Moonrise Kingdom a feature length meditation on symmetry in shot composition?  What is the effect when Anderson places a character in the center of a composition, instead of one side?

Anderson admitted that he was influenced by Norman Rockwell when he invented the Khaki Scouts. Really?  Normal Rockwell?

What is the significance of the tracking shot in Moonrise Kingdom?  How does Anderson's use of so many obtrusive camera techniques tie in with the major themes of the movie?  How much does Anderson, like Hitchcock, deliberately call attention to these techniques?  As Galya Kay writes, "Hitchcock pulls us into the story and then makes us aware of the artificial framework of that story." In Moonrise Kingdom, the children play records designed to educate them about classical music--once again, calling attention to how the art was made.
Labels: Moonrise Kingdom Wes Anderson

Jon said…
I love what you're saying here and providing some great discussion pieces to center around. I just saw the film and think it's one of Anderson's 3 best films. I think one of the oddest parts while I watched it was the coming storm and Noah's ark business but of course when you think of the Noye's Fludde aspect it makes total sense. I also love the part you mentioned about the "fetishization of the offline".
July 2, 2012 at 4:15 PM

The Film Doctor said…
Thanks, Jon. I'm still undecided as to whether I prefer Moonrise Kingdom to Rushmore, but I agree that the former is one of Anderson's best films.

I wonder about Anderson's star-studded use of celebrity in Moonrise Kingdom. Ed Norton and Bruce Willis are well cast as Scout Master Ward and Captain Sharp, but Anderson's use of Bill Murray and Tilda Swinton reminds me of Woody Allen's recent films. Critical pleasure in the film may have something to do with such heavyweight stars used so lightly.
July 3, 2012 at 7:33 AM

Jon said…
Film Dr. - I still think Rushmore is the best but this one is still pretty great. I sort of feel like Anderson likes to work with Archetypes or even actor Archetypes such as Murray or Swinton because they inherently bring the characterization he's looking for. If his characters are more defined by their personas, rather than what they say, then it makes sense to find someone who brings that persona. Most of the speech is rather drab and deadpan, so characterization is in the small details of which actors like this bring in spades.
July 3, 2012 at 8:56 PM

Richard Bellamy said…
FilmDr. - I enjoyed your observations here, and I really enjoyed Moonrise Kingdom. Very interesting that this film is sort of retrospective wish fulfillment for Anderson. I love how the film portrays the imagination at work, as most of Anderson's films do. The film's best moments come when Suzy and Sam set out on their journey together. It is clear that they are kindred spirits because they both use their imaginations. Very touching.

Some moments in the film are awkward - for me, both lightning incidents. Also, Swinton's character seems to belong more in Gilliam's Brazil. Also, I missed Owen Wilson.

Watching the film, I prepared myself for the appearance of Anderson's signature use of slow-slow-mo. When it came, rather late in the film, I found it very poignant. What did you think? What's your favorite Anderson slow-mo mo?
July 4, 2012 at 11:40 AM

The Film Doctor said…
Good points, Jon, although actors like Jason Schwartzman run a risk of overly relying on allusions to their previous successes (such as Max Fischer) at the expense of their current work. As much as I generally liked Scott Pilgrim vs. the World, I especially appreciated Schwartzman referring to Max.

Thanks for your thoughts, Hokahey. I like how Sam has to come up with several clever stratagems just to carry Suzy's books. Yes, I enjoyed Anderson's use of the slow motion in the "wedding" scene. It left me wondering about the psychological effect of characters walking towards the camera as it dollies back (as in the slow motion scene of Rushmore).
July 5, 2012 at 11:59 AM

Film izle said…
thanks doc. i love Wes Anderson movies, but not the main story. Stories yeah kind of naive but not good enough. Places and colors on the point.
January 23, 2015 at 4:52 PM