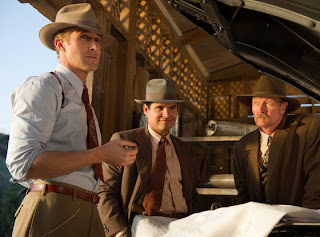 ---Apollo Robbins and the art of the pickpocket

---Kill Bill: The Female Archetype vs. The Goddess

---"Enter Justin Bieber. In his new single “Beauty and a Beat,” Bieber ups the ante on Prince by declaring he’ll 'party like it’s 3012 tonight.' At face value that augury is a life-affirming vision. We humans shall persist through each and every supposed demise. Lo, a thousand years into the future, we’ll still be partying. But Beiber misses an incontrovertible fact about the future of our planet and our species: If we make it to the year 3012, the world will be completely and utterly horrifying.

Over the course of the coming centuries, the sea levels around the world will rise, drowning most coastal cities, especially those in the so-called “developing world,” which have contributed the least to climate change. The rest of the world will be ravaged by continually strengthening super-storms that will destroy oceanfront property in Provo, Utah. Meanwhile, the quality of air, soil, and water on the planet will continually degenerate, as our supplies of coal and petroleum are burned out entirely, and nuclear power continues to prove even more of an environmental disaster than the supposedly dirty sources it was intended to replace. And every charismatic politician, non-governmental organization, weepy liberal public relations campaign, and Potemkin wind farm will be completely powerless to stop this death march so long as profit remains the bottom line for the human race.

As the delicate global ecosystem that gently nourished the ascent of humanity begins to crumple, basic resources will disappear. Noxious air, brackish water, and nearly indigestible food will become commodities for which we risk our short, cancerous lives to procure. Wars that begin between governments over resources will rapidly degenerate into a war of all against all, as states lose their ability to provide basic services and repress populations." --Jarrod Shanahan

---“Only those who are capable of silliness can be called truly intelligent.”

---"The so-called second screen, where there is content and viewer interplay between devices, exists already, but it will be pushed into the center stage at some point in 2013. Yes, there should be an Apple TV next Fall, but other industry players like Intel are coalescing around this area too. And you know what? It won’t be some kind of split screen where your Twitter feed will follow along with the show, like some kind of Mystery Science Theater. Oh, sure, it may be that in its most uncreative examples. What will make the second screen transformative will be when its creative potential is enabled via SDKs to individual developers who will disrupt conventional viewing in ways we can’t even imagine. Think of how mash-ups, remixes, and fan-made parody videos have changed the face of short filmmaking, and now imagine similar experiments applied to streamed live content. Start thinking about how your creativity can flow into this space now instead of waiting for the mega-corps to define it for you." --Scott Macauley

---a deleted scene from Looper 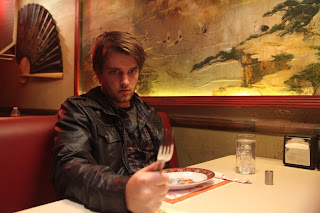 ---"In the 48 years since their pioneering book was published, Wise and Ross's invisible government has triumphed over the visible one. It has become the go-to option in this country. In certain ways, it is also becoming the most visible and important part of that government, a vast edifice of surveilling, storing, spying, and killing that gives us what we now call 'security,' leaves us in terror of the world, never stops growing, and is ever freer to collect information on you to use as it wishes." --Tom Engelhardt

---a plane crash on a Moscow highway

---"If you were a US leader, or an official of the National Security State, or a beneficiary of the private military and surveillance industries, why would you possibly want the war on terror to end? That would be the worst thing that could happen. It's that war that generates limitless power, impenetrable secrecy, an unquestioning citizenry, and massive profit."  --Glenn Greenwald

---the beginning of Warm Bodies

---trailers for Dead Man Down, John Dies at the End, and 8 Ball

---"Marty’s character [in Apocalypse Now] is coming across as too bland; I tried to break through it. I always look for other levels, hidden levels, in the actor’s personality and in the personality of the character he plays. I conceived this all-night drunk; we’d see another side of that guy. So Marty got drunk. And I found that sometimes, when he gets drunk, a lot comes out. . . I didn’t tell him to smash his hand into the mirror."  --Francis Ford Coppola
Labels: Notable film and media links