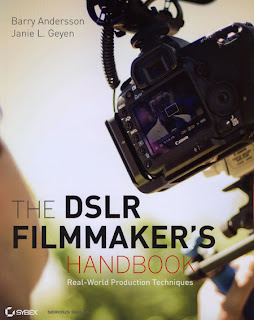 "Making a movie is really a kind of play."--Nobuhiko Obayashi, director of House (1977)

Once again, for the fifth year in a row, I began an Interim video production class today with twelve students (four retaking the class from last year), two nice DSLR cameras (including a new Canon t2i), several assistants, and only ten full days to work with. What are some of the new things in the creative mix?

1) A colleague showed me a Call of Duty app where you can have short videos of family members blown up by various large weapons.

2) The new iMovie editing software helps you produce a travel video trailer that incorporates music and graphics that can make you look as if you lived an Indiana Jones adventure. Back in the day, the Pinnacle editing software used to cause our Dell computers to freeze up, leading to all kinds of last minute nightmare deadline situations. With the iMovie software and two new iMacs, that never happens anymore.

3) The relatively new DSLR cameras have greatly improved the photographic quality of the class videos. Even though we use decent external microphones, I still wonder whether students should use audio recorders like the Zoom H4N portable one.

Tomorrow, students will start shooting their first practice videos.  One will concern a guy who finds that he likes to wear a dress. I forget what the other one is about: a bottle fight in a field?  Today, soon after the entire school practiced an armed intruder alert drill, one newly formed filmmaking group (without any sense of irony that I could see) considered shooting a gun fight in a reading room.

Some beginning questions that I hope to answer over the next few days:

a) Will the students find a location as cool as the antebellum mansion that we used last year for a horror film?

b) What happens to college students who graduate with a major in film?  A colleague told me that a family member of his with that degree ended up working at a General Nutrition Center recently (not the right answer). I plan on interviewing a couple senior film majors, asking them what career paths they plan on following, and what they recommend for new graduates.

c) Can the students rig up some new boom microphones with PVC pipes?

d) Can we use new apps in our smart phones to help with the video production? Which ones?

e) Can we use Wells Root's book Writing the Script: A Practical Guide for Films and Television to help with the screenwriting? 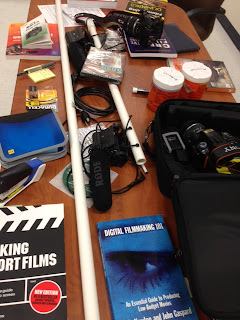 As usual, I have no idea what will happen, what kind of oddball random living room I will end up sitting in, what kind of dark alley will lead to bloody death. I have seen students fight with various implements in the dark basement of the local museum. A local policeman once volunteered to help one group with a murder scene. One year, I hung out with a gang for hours as they shot scene after scene of a young man laying on the cold suburban street in his pajamas after getting "run over." What will the students think up this year?
Labels: video production notes

Wlasen said…
Hi! I thought this post could maybe help your students improve their movies for free.
http://www.raindance.org/zero-budget-software-suite-for-filmmakers/
Greetings from Argentina!
January 4, 2013 at 8:50 AM

Wlasen said…
I just realized I probably read that from your blog. Sorry, I read so many I got confused.
January 4, 2013 at 9:02 AM

I applaud your efforts. Yes, it is interesting to see what ideas come from the minds of the young. I have to bite my tongue when many of those ideas involve zombies. Sill, when they do make movies, it is nice to see that the very visual/video nature of 21st century technology has instilled them with an almost innate sense of what makes a good shot.

Last year my film club enjoyed a more productive year after a couple of slump years. This year my filmmakers are bogged down again. They have ideas but they don't make the time to follow through. To me that means they are just not passionate enough about making movies. One new member keeps coming in with a bigger and better camera - but no completed movies. Now he has $3000-dollar professional size camcorder - but no computer powerful enough to be compatible with it.

My classroom has a big iMac and iMovie and the older Final Cut (too complicated for my students) though I told them they could get the Final Cut Pro X free trial which gives you enough time to edit a movie. I recently bought Pro X for myself and I'm really enjoying it. I'm assuming it doesn't have the drawback that iMovie has - iMovie is made for shorter home videos and so it bogs down on larger movie projects that employ a lot of dissolves and other special effects.

I hope your students enjoy themselves and come up with some interesting ideas for movies.
January 5, 2013 at 9:56 AM

Thus far, iMovie has worked well for this class.

It probably helps to have a formal class with a grade to motivate the students. They do tend to have an innate sense of what makes a good shot. We will turn to questions of lighting on Monday. I have some new LED lights to try out with their action videos.
January 5, 2013 at 1:04 PM

Unknown said…
Making a movie or a video production seems complicated and needs had work. But I think this is totally fun!

Unknown said…
Great post, how are you finding the teaching experience? I've been doing video production in NH for about 3 or 4 years now, and I think I'd really like to get back in the classroom and work with students. How much experience in the field do you believe is necessary before heading back into the classroom?