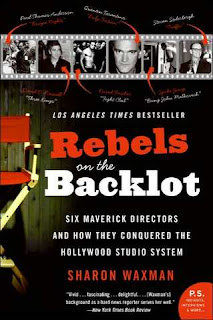 "Always remember: Steven [Soderbergh] is a genius. Everything he says, does, ingests, and secretes is Art. Trying to make him conform to standard ideas of behavior will only harm his Art and result in police intervention. The degrading humiliation and diminished sense of self you will experience is part of Steven's desire to break you out of your stagnant uninspired existence, which is not Art.  Get off yourself. Get onto Steven."

"On The Last Samurai . . . crew members were forbidden to look Tom Cruise in the eye on set."  --both quotes from page 318 of Sharon Waxman's Rebels on the Backlot

Now, after the third day of my Interim filmmaking class, I should point out that things are likely to get a bit loopy as the week goes on.  I am tired.  I just ate a dark chocolate Creme de Pirouline Artisan Rolled Wafer. I have been blessed with an extraordinarily perfectionist two groups of students who worked for four hours plus on their action videos before pitching and arguing over their longer narrative ideas at 3 in the afternoon.

At 8:30 am, Olivia Keyes lectured the class about all aspects of film production. In her fourth year as an undergrad at USC, she tends to accept any film work that she can find. She's trying to get certified at operating a Steadicam later in the spring, and she told stories about people getting busted for filming train tracks without permission, about being told to erase her digital footage by a policeman, and about how Kevin MacLeod has the best royalty-free collection of music on the internet. She spoke of various Kickstarter and Indiegogo campaigns that she has initiated for film projects, and she showed a knife fight action film where someone accidentally broke her thumb. After the lecture, she then rushed back to Columbia, but she will return tomorrow for an interview about what one does with a Media Arts degree these days.

Then, for the next five hours (not including lunch), I walked back and forth across campus between the two groups as they shot an outdoor western involving a bottle fight on the lawn and a more noirish indoor poker game that erupts into a brawl. Some quotes I wrote down from the bottle fight:

"Flattery will get you nowhere, Otis. I ain't even gotten started yet."

"I was trying to smirk confidently."

"The Hunger Games is the Battle Royale with cheese."

I enjoyed assisting Black Wings Studios with the art of properly knocking a thug out with a karate chop before returning to Acetate Flame Entertainment as they carefully broke a Martinelli's Gold Medal Sparkling Apple-Raspberry 100% Juice bottle under a tree with a rock. After their director roundly ignored one of my suggestions about blocking the next to the last scene, we finally retired to the classroom for the pitches.

We listened to various story ideas: one concerned a scientist who masters the ability to go back and forth in time across the span of a week. He eventually develops a relationship with a cactus. Another story had an "omnipresent being" who plants clues across various epochs for a mere human to decipher. A World War I veteran suffers from post-traumatic stress disorder who either gets cured or commits suicide or both. Lastly, tiny aliens inhabit most of humanity except for four people. If an alien decides to exit a particular person's body, then the unlucky human goes into a coma.  That last pitch included a scene where 50 comatose extras lay in a row across the front of the school campus.

After much discussion, we finally settled on two story ideas:

1) The government has now genetically programmed everyone to fall in love with a carefully prepared mate. Unfortunately, our heroine does not fall in love, and soon she finds she must escape the compound.

2) A young man desires to join a Poetry Club, but he must first endure three bizarre vicious challenges. When he unexpectedly survives those tests, he arrives at the old and labyrinthine Poetry Club Theater downtown. When he enters the building, a large Poetry Club member is reading a newspaper by a locked door. He contemptuously refuses to believe that the applicant has passed the indoctrination. After much intrigue, the applicant enters into another room where he finds various Poetry Club members representing different poetic movements--Confessional, Cavalier, Pastoral, Fireside, Imagist, Harlem Renaissance, Beat, Metaphysical, etc.--and they all actively resist his membership in the club. They can't believe that he even had the gall to enter the building. Finally, after he manages to penetrate several rooms further inside the increasingly David Lynchian theater, the applicant comes across one oddly friendly member who cheerfully lets him into the Club's inner sanctum (the camera doesn't follow). We then hear high-pitched screams through the walls.
Labels: video production notes